“Jimmie Foxx with all those muscles, hitting drives that sounded like gunfire. Crraack. A hell of a lot louder than mine sounded.” Ted Williams

They called him The Beast! Standing six feet even, he was 195 lbs of solid muscle and he could hit! 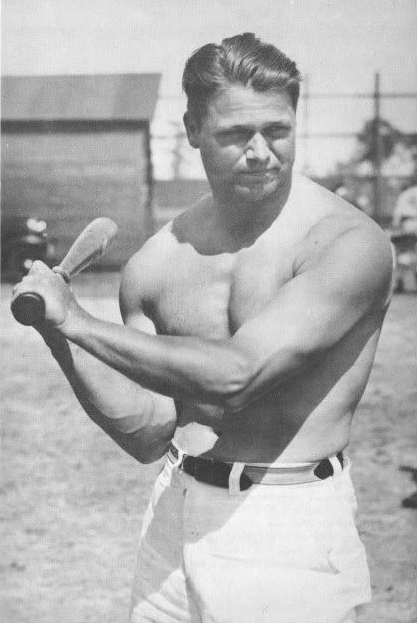 James Emory “Jimmie” Foxx made his major league debut as a catcher with the Philadelphia Athletics in 1925. He was 17 years old. He joined the Red Sox in 1936 and by that time he had: graced the cover of Time magazine (1929), become the first player in baseball history to win back to back MVP Awards (32 and 33), won the Triple Crown (1933), set the major league record for home runs in a season by a right-handed hitter (58 in 1932), was the games all time leading right-handed home run hitter and was second to Babe Ruth on the all time home run list with 302 homers.

When Tom Yawkey purchased the team in 1933, he began immediately to spend his inherited millions and he did so by investing in Fenway Park and his Boston Red Sox. Fenway had been virtually unchanged since its opening in 1912, save for the scarred left-field grandstands left charred by a fire. The Red Sox had sunk to the depths of the American League and had not had a winning season since the days of Babe Ruth.

Moving to change all that Yawkey began to spend his money acquiring talent and a big piece of that puzzle was the acquisition of Jimmie Foxx on December 10, 1935.  Foxx and Johnny Marcum came from Philadelphia for a journeyman pitcher, a minor leaguer and oh yeah, $150,000 of Mr. Yawkey’s new-found millions.

His assault on the American League and the record books continued with the Red Sox and at Fenway Park. In his six full season with the Red Sox he averaged 36 home runs and 129 RBI per season while hitting .322! In 1938 he won his third MVP Award hitting .349 with 50 homers and an astonishing 175 RBI. His RBI total remains a team record and until David Ortiz hit 54 home runs in 2006, he was the only Red Sox player to crack the 50 home run barrier. His lifetime batting average at Fenway Park was .339.

Good natured, generous and kind, Foxx fell on tough financial times following his playing days. Investments went bad and drinking seemed to be getting the best of him. He managed in the All American Girls Baseball League in the early fifties. Tom Hanks character in the movie A League of their Own is loosely based on Jimmie Foxx.

When word got out, that Foxx was experiencing financial difficulties, he began to receive job offers and donations, the donations he turned over to the Jimmy Fund.

With the steroid fueled power explosion of the 1990s and early 2000s, an interest was rekindled in the career of Jimmie Foxx. This resurgence has solidified his place in baseball history. He was a charter member of the Boston Red Sox Hall of Fame in 1995 and his flag of immortality waves outside Fenway’s hallowed grounds. 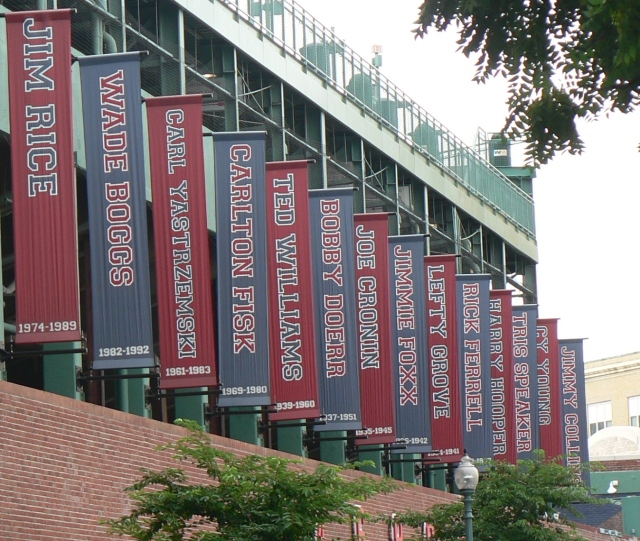 In 1997, after a ten-year campaign to raise money, a bronze statue of Double X was unveiled in downtown Suldersville Maryland, Foxx’s hometown. 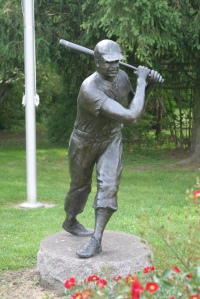 Who said you can never go home again?

Hello and welcome, my name is Raymond Sinibaldi. An educator for more than two decades, a baseball fan for nearly 60 years, I have authored four books about baseball and her glorious history; with a fifth on the way in late spring of 2015; the first, The Babe in Red Stockings which was co-authored with Kerry Keene and David Hickey. It is a chronicle of Babe's days with the Red Sox. We also penned a screenplay about Babe's Red Sox days so if any of you are Hollywood inclined or would like to represent us in forwarding that effort feel free to contact me through my email. In 2012 we three amigos published Images of Fenway Park in honor of the 100th birthday of Fenway Park. That led to the creation of this blog. The following year, 2013 came my first solo venture, Spring Training in Bradenton and Sarasota. This is a pictorial history of spring training in those two Florida cities. The spring of 2014 brought forth the 1967 Red Sox, The Impossible Dream Season. The title speaks for itself and it also is a pictorial history. Many of the photos in this book were never published before. The spring of 2015 will bring 1975 Red Sox, American League Champions. Another pictorial effort, this will be about the Red Sox championship season of 1975 and the World Series that restored baseball in America. I was fortunate enough to consult with sculptor Franc Talarico on the “Jimmy Fund” statue of Ted Williams which stands outside both Fenway Park and Jet Blue Park Fenway South, in Fort Myers Florida. That story is contained in the near 300 posts which are contained herein. This blog has been dormant for awhile but 2015 will bring it back to life so jump on board, pass the word and feel free to contact me about anything you read or ideas you may have for a topic. Thanks for stopping by, poke around and enjoy. Autographed copies of all my books are available here, simply click on Raymond Sinibaldi and email me.
View all posts by fenwaypark100 →
This entry was posted in Fenway Park Baseball and tagged Fenway Park, Jimmie Foxx, MVP, Suldersville Maryland, The Beast. Bookmark the permalink.

3 Responses to “Jimmie Foxx with all those muscles, hitting drives that sounded like gunfire. Crraack. A hell of a lot louder than mine sounded.” Ted Williams