“I never ride just to ride. I ride to catch a fox. I play baseball to make the team.” Sargent Shriver

No less than 16 men with the last name of Fox have played major league baseball. All save one spelled it with one “x”. Two of them have been enshrined in Cooperstown, Jimmie and Nellie. One of them is on today’s roster of the Baltimore Orioles and another pitched at the AAA level for the Pawtucket Red Sox last year.  Most toiled in obscurity with mediocre careers, and then there is Ervin “Pete” Fox.

From Evansville Indiana, Fox made the jump from ‘A’ ball to the Tigers in 1933 after hitting .357 with 19 home runs. Originally a center fielder, he made the switch to right in 1934 and it was there he played, for the most part, for the rest of his career. A key part in the Tiger offense in their pennant winning seasons of 1934 and 35, he led the Tigers to victory over the Cubs in 1935 hitting .385 with 10 hits and a team leading 4 RBI. If there had been a World Series MVP Award at the time, he would have won it for sure.

Purchased by the Red Sox on December 12, 1940, he joined his namesake, Jimmie, and was a fourth outfielder in 1941 and 1942. He had a ring side seat to the .406 season of Ted Williams and in fact even spelled the Splendid Splinter in left eight times during that historic season. He was Joe Cronin’s “go to” guy off the bench and hit a solid .302 in 73 games for his new team.

With the war taking hundreds of major league players away, Fox found himself the Red Sox starting right fielder in 1943 and 44. He often hit third and he did not disappoint, hitting .288 in ’43’ to lead the team and he also swiped a team leading 22 bases at the age of 34. The following year, still occupying the third spot in the lineup, he hit .315 and made the American League all-star team. In 1945, with his skills diminishing, he found himself once again relegated to a back up role. He reported to camp in 1946 and was released on March 29 bringing his big league career to a close. 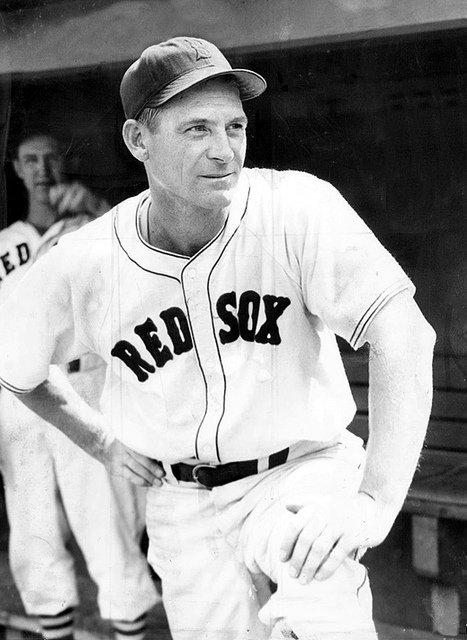 In 13 big league seasons, Ervin “Pete” Fox amassed 1678 hits and had a lifetime batting average of .298; numbers which are comparable to Red Sox legend Dom DiMaggio. He took a particular liking to Fenway Park where he hit .327 lifetime. He played in three World Series in which he hit a combined .327 in 55 at bats, and he was inducted into the  Indiana Baseball Hall of Fame  in 1980.

Hello and welcome, my name is Raymond Sinibaldi. An educator for more than two decades, a baseball fan for nearly 60 years, I have authored four books about baseball and her glorious history; with a fifth on the way in late spring of 2015; the first, The Babe in Red Stockings which was co-authored with Kerry Keene and David Hickey. It is a chronicle of Babe's days with the Red Sox. We also penned a screenplay about Babe's Red Sox days so if any of you are Hollywood inclined or would like to represent us in forwarding that effort feel free to contact me through my email. In 2012 we three amigos published Images of Fenway Park in honor of the 100th birthday of Fenway Park. That led to the creation of this blog. The following year, 2013 came my first solo venture, Spring Training in Bradenton and Sarasota. This is a pictorial history of spring training in those two Florida cities. The spring of 2014 brought forth the 1967 Red Sox, The Impossible Dream Season. The title speaks for itself and it also is a pictorial history. Many of the photos in this book were never published before. The spring of 2015 will bring 1975 Red Sox, American League Champions. Another pictorial effort, this will be about the Red Sox championship season of 1975 and the World Series that restored baseball in America. I was fortunate enough to consult with sculptor Franc Talarico on the “Jimmy Fund” statue of Ted Williams which stands outside both Fenway Park and Jet Blue Park Fenway South, in Fort Myers Florida. That story is contained in the near 300 posts which are contained herein. This blog has been dormant for awhile but 2015 will bring it back to life so jump on board, pass the word and feel free to contact me about anything you read or ideas you may have for a topic. Thanks for stopping by, poke around and enjoy. Autographed copies of all my books are available here, simply click on Raymond Sinibaldi and email me.
View all posts by fenwaypark100 →
This entry was posted in Fenway Park Baseball and tagged Fenway Park, Pete Fox. Bookmark the permalink.