” The best outfield trio I ever saw….That’s easy, Lewis, Speaker and Hooper, and the greatest of those was Hooper.” Bill Carrigan

Nobody in the history of Fenway Park was part of more World Championship Red Sox teams than Harry Bartholomew Hooper! 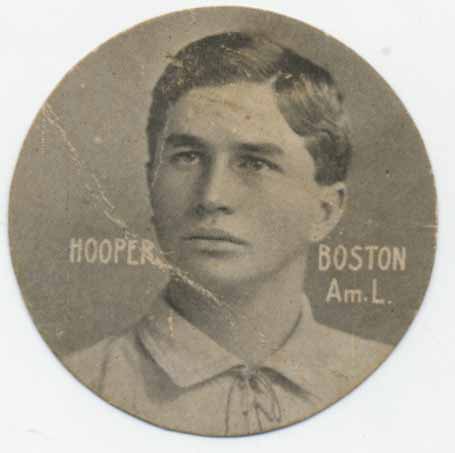 He played 12 seasons with the Red Sox starting in 1909 and for those 12 seasons he was a constant, leading off and playing right field. He was the first Red Sox hitter to bat in the history of Fenway Park and he was the leadoff hitter in every World Series game they played in 1912, ’15’, ’16’ and ’18’. 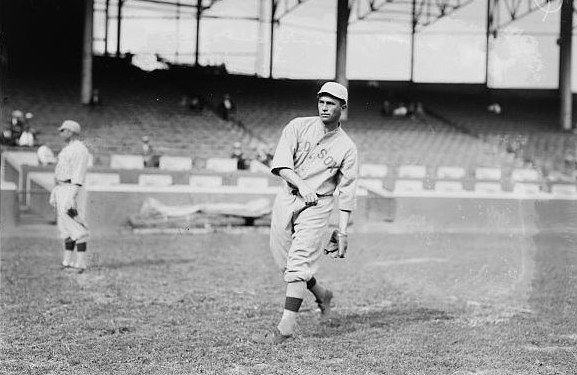 Still recognized as one of the best defensive right fielders to ever play the game, “Hoop” was a transitional player. In the early years of the Modern Era, ball players were primarily from the east and were, how should we say, not considered gentlemen. They were, for the most part, uneducated “tuffs” and not someone who dad’s wanted their daughters bringing home. Harry Hooper is one of the players that began to change all that. A college graduate with an engineering degree, Hooper taught himself to hit lefty so he could get to first base quicker.

Hooper was part of what many have called the best outfield in the Dead Ball Era. Playing along with Duffy Lewis in left and the incomparable Tris Speaker in center, opposing batters were hard pressed to get a ball, past, over or between them.

A solid, consistent offensive performer and a prototypical Dead ball Era leadoff hitter,”Hoop” amassed 20 stolen bases nine times,  scored 80 or more runs 12 times and 92 years after he played his last game in a Red Sox uniform he remains their all time stolen base leader with 300. Inducted into the Major League Baseball Hall of Fame in 1971, he was a charter member of the Red Sox Hall of Fame in 1995.

Harry Hooper, Carl Yastrzemski, and Duffy Lewis in 1962 at Fenway Park for the 50th Anniversary of the 1912 World Champion Red Sox.

A Hall of Famer who spent 12 of his 17 seasons with the Red Sox, you might wonder why his number is not retired on Fenway’s right field facade. Well, it’s simple, no numbers were worn while he played and the Red Sox did not put numbers on their backs until the 1931 season. However Harry Hooper has his place of honor as his banner flies outside of Fenway Park on Van Ness Street. 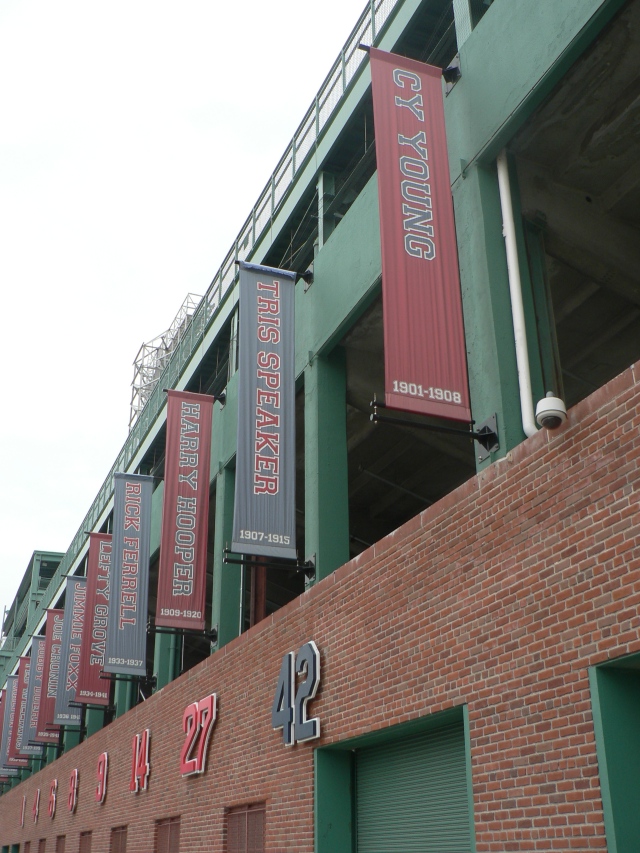 And so it was at this time in Fenway Park history, January 1912.

Hello and welcome, my name is Raymond Sinibaldi. An educator for more than two decades, a baseball fan for nearly 60 years, I have authored four books about baseball and her glorious history; with a fifth on the way in late spring of 2015; the first, The Babe in Red Stockings which was co-authored with Kerry Keene and David Hickey. It is a chronicle of Babe's days with the Red Sox. We also penned a screenplay about Babe's Red Sox days so if any of you are Hollywood inclined or would like to represent us in forwarding that effort feel free to contact me through my email. In 2012 we three amigos published Images of Fenway Park in honor of the 100th birthday of Fenway Park. That led to the creation of this blog. The following year, 2013 came my first solo venture, Spring Training in Bradenton and Sarasota. This is a pictorial history of spring training in those two Florida cities. The spring of 2014 brought forth the 1967 Red Sox, The Impossible Dream Season. The title speaks for itself and it also is a pictorial history. Many of the photos in this book were never published before. The spring of 2015 will bring 1975 Red Sox, American League Champions. Another pictorial effort, this will be about the Red Sox championship season of 1975 and the World Series that restored baseball in America. I was fortunate enough to consult with sculptor Franc Talarico on the “Jimmy Fund” statue of Ted Williams which stands outside both Fenway Park and Jet Blue Park Fenway South, in Fort Myers Florida. That story is contained in the near 300 posts which are contained herein. This blog has been dormant for awhile but 2015 will bring it back to life so jump on board, pass the word and feel free to contact me about anything you read or ideas you may have for a topic. Thanks for stopping by, poke around and enjoy. Autographed copies of all my books are available here, simply click on Raymond Sinibaldi and email me.
View all posts by fenwaypark100 →
This entry was posted in Fenway Park Baseball and tagged 1912, Fenway Park, Harry Hooper, Red Sox, Tris Speaker. Bookmark the permalink.