“The man who has found nothing worth dieing for, is not fit to live.” Martin Luther King 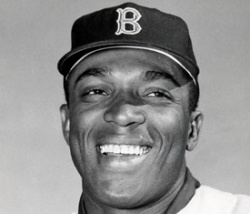 Martin Luther King was named pastor of the Dexter Street Baptist Church in 1954 and graduated from Boston University in 1955 with a doctorate degree in systematic theology.

Martin Luther King met Coretta, a music student, while studying in Boston and in June of 1953 they married.

Earl Wilson was originally signed as a catcher and in 1953 he played with the Bisbee-Douglas Copper Kings in the Arizona/Texas League. He had trouble throwing the ball to second base from behind the plate because it tailed too much, so he was converted to a pitcher.

In 1955, Martin Luther King emerged as the national spokesman for a movement when a young black lady by the name of Rosa Parks refused to give up her seat on the bus in Montgomery Alabama. Under his leadership, spawned the Montgomery Bus Boycott of 1955 and ’56’, and the face of America was changed forever.

Martin Luther King’s journey took him through, Birmingham and Selma, Albany and St. Augustine. It took him to the steps of the Lincoln Memorial from where his words echo through history and it took him to Memphis Tennessee where his eloquent voice was silenced.

Earl Wilson’s journey took him through El Paso and San Jose, Montgomery and Albany NY, Minneapolis and then to Fenway Park where in 1959 he joined “Pumpsie Green” who had preceded him by a week and they integrated the Boston Red Sox!

Martin Luther King wove himself into the “mystic chords of memory” of our nation by summoning what Abraham Lincoln called the “better angels of our nature.”

Earl Wilson wove himself into the fabric of Fenway Park history by providing a shining example of excellence both on and off the field. On the field he became the first black pitcher in the history of the American League to throw a no-hitter and he hit a home run in the game as well. Off the field he would never bend, never bow, never yield! 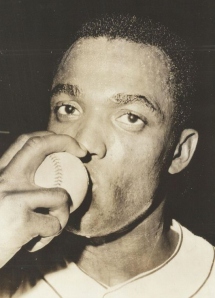 I don’t know if Dr. King and Mr. Wilson ever met. But I do know that they each chose their path, and when the events of their lives swept them to places they never dreamed they would be, they answered, they stood up and they persevered; striving to be what they “ought to be.”

May this day bring each of us the pursuit of what we “ought to be.”

And so it is on this day in Fenway Park history,

Hello and welcome, my name is Raymond Sinibaldi. An educator for more than two decades, a baseball fan for nearly 60 years, I have authored four books about baseball and her glorious history; with a fifth on the way in late spring of 2015; the first, The Babe in Red Stockings which was co-authored with Kerry Keene and David Hickey. It is a chronicle of Babe's days with the Red Sox. We also penned a screenplay about Babe's Red Sox days so if any of you are Hollywood inclined or would like to represent us in forwarding that effort feel free to contact me through my email. In 2012 we three amigos published Images of Fenway Park in honor of the 100th birthday of Fenway Park. That led to the creation of this blog. The following year, 2013 came my first solo venture, Spring Training in Bradenton and Sarasota. This is a pictorial history of spring training in those two Florida cities. The spring of 2014 brought forth the 1967 Red Sox, The Impossible Dream Season. The title speaks for itself and it also is a pictorial history. Many of the photos in this book were never published before. The spring of 2015 will bring 1975 Red Sox, American League Champions. Another pictorial effort, this will be about the Red Sox championship season of 1975 and the World Series that restored baseball in America. I was fortunate enough to consult with sculptor Franc Talarico on the “Jimmy Fund” statue of Ted Williams which stands outside both Fenway Park and Jet Blue Park Fenway South, in Fort Myers Florida. That story is contained in the near 300 posts which are contained herein. This blog has been dormant for awhile but 2015 will bring it back to life so jump on board, pass the word and feel free to contact me about anything you read or ideas you may have for a topic. Thanks for stopping by, poke around and enjoy. Autographed copies of all my books are available here, simply click on Raymond Sinibaldi and email me.
View all posts by fenwaypark100 →
This entry was posted in Fenway Park Baseball, Fenway Park Other and tagged "Pumpsie" Green, Earl Wilson, Fenway Park, Martin Luther King, Red Sox. Bookmark the permalink.

2 Responses to “The man who has found nothing worth dieing for, is not fit to live.” Martin Luther King