There were eight reserves on Fenway Park’s 1912 Red Sox squad and two of them were actually born in Eurpoe.

Martin John Krug was born in Koblenz Germany on September 10, 1888.  Drafted by the Red Sox in 1911 he made his debut the following May 29th in a 21-8 Red Sox over Washington at Fenway Park.  He played a total of 20 games for the Red Sox in Fenway’s inaugural summer, 11 at short, four at second and five as a pinch-hitter. He did not make an appearance in the historic 1912 World Series and the following year he was back in the minor leagues where he played until 1922 returning for a full big league season with the Chicago Cubs. He was back in the minors the following year and in 1927, he retired.

Marty worked as a scout for the Detroit Tigers and Philadelphia Phillies between 1931 and 1948. After scouting a high school player at Hoover High School in San Diego in the mid 1930s; he spoke with the youngster’s mother offering these words, “he is too skinny and frail to play baseball” and he advised her to “discontinue her son’s playing career out of concern for his safety.” That player was this guy….. 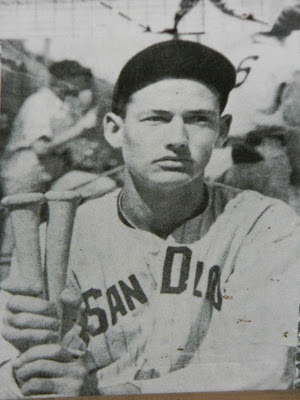 Olaf Henriksen, nicknamed “Swede” by his mates, was born in Kirkerup Denmark and remains, to this day, the only player in major league history to be born in Denmark. Joining the Red Sox in 1911, Olaf immediately became known for a proficient, propensity to get on base. It is this quality would define his career which spanned seven years, 321 games and 598 appearances in the left-handed batters box, all with the Boston Red Sox.

Flourishing and reveling in his role, “Swede” made a notable and historic impact in the early years of Fenway Park.  The most significant coming in the deciding game of the 1912 World Series. It was the bottom of the seventh inning and Red Sox rookie Hugh Bedient and the Giants incomparable one, Christy Mathewson were locked in a duel. With the Giants, leading 1-0, there two outs and the Sox had Jake Stahl at second and Heinie Wagner (you remember them) at first. Manager Stahl called upon “Swede” to pinch hit for Bedient. The slashing lefty rifled a ball off the third base bag for a double, scoring Stahl and tieing the game which the Red Sox would eventually win in 10 innings to capture Fenway’s first World Championship.

Olaf “Swede” Henricksen was part of two more Fenway Park World Championships in 1915 and “16”. He was around when this kid showed up in 1914.

In a spring training intra squad game in March of 1916, Olaf was playing right field when Babe launched one which was heading over the fence. Not deterred, Henriksen literally ran through the wooden fence and caught the baseball. On July 7th of the same year, “Swede” again made history when he pinch-hit for Babe Ruth against the Indians at Fenway Park. He walked, scored the tieing run in a game the Sox won 2-1.

Olaf “Swede” Henriksen retired following the 1917 campaign and for a couple of years in the early twenties, he coached at Boston College. He settled in Norwood Massachusetts where he was laid to rest in 1962.

Hello and welcome, my name is Raymond Sinibaldi. An educator for more than two decades, a baseball fan for nearly 60 years, I have authored four books about baseball and her glorious history; with a fifth on the way in late spring of 2015; the first, The Babe in Red Stockings which was co-authored with Kerry Keene and David Hickey. It is a chronicle of Babe's days with the Red Sox. We also penned a screenplay about Babe's Red Sox days so if any of you are Hollywood inclined or would like to represent us in forwarding that effort feel free to contact me through my email. In 2012 we three amigos published Images of Fenway Park in honor of the 100th birthday of Fenway Park. That led to the creation of this blog. The following year, 2013 came my first solo venture, Spring Training in Bradenton and Sarasota. This is a pictorial history of spring training in those two Florida cities. The spring of 2014 brought forth the 1967 Red Sox, The Impossible Dream Season. The title speaks for itself and it also is a pictorial history. Many of the photos in this book were never published before. The spring of 2015 will bring 1975 Red Sox, American League Champions. Another pictorial effort, this will be about the Red Sox championship season of 1975 and the World Series that restored baseball in America. I was fortunate enough to consult with sculptor Franc Talarico on the “Jimmy Fund” statue of Ted Williams which stands outside both Fenway Park and Jet Blue Park Fenway South, in Fort Myers Florida. That story is contained in the near 300 posts which are contained herein. This blog has been dormant for awhile but 2015 will bring it back to life so jump on board, pass the word and feel free to contact me about anything you read or ideas you may have for a topic. Thanks for stopping by, poke around and enjoy. Autographed copies of all my books are available here, simply click on Raymond Sinibaldi and email me.
View all posts by fenwaypark100 →
This entry was posted in Fenway Park Baseball and tagged 1912, 1912 World Series, Babe Ruth, Christy Mathewson, Fenway Park, Heinie Wagner, Hugh Bedient, Jake Stahl, Marty Krug, Olaf Henriksen, Red Sox, Ted Williams. Bookmark the permalink.

1 Response to Attention Please Ladies and Gentlemen Boys and Girls, Now Batting for your 1912 Boston Red Sox, the Europeans…..