The 1946 baseball season was filled with hope, renewal, promise and celebration! World War II had come to an end and the players were returning. For the Red Sox this meant the return of Ted Williams, Johnny Pesky, Bobby Doerr, Dom DiMaggio and company. Fenway Park was buzzing with the anticipation of the baseball season and the possibility that the Red Sox could FINALLY return to the World Series.

The Red Sox broke out of the gate winning 21 of their first 24 games including a club record of 15 straight wins, which still stands. Two weeks later they reeled of 13 more straight wins and after the first 50 games of the year, they had an astounding record of 41-9, was good enough for a 5 1/2 game lead over the second place Yankees, the largest Red Sox lead in 28 years. 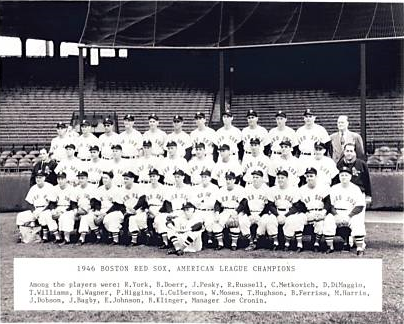 Spurred by the returning veterans, it was Ted Williams who led the way with a .342 batting average while hitting 38 home runs and knocking in 123 teammates. The “Splendid Splinter” won his first MVP award as the Red Sox won 104 games; clinching the pennant on September 10th. 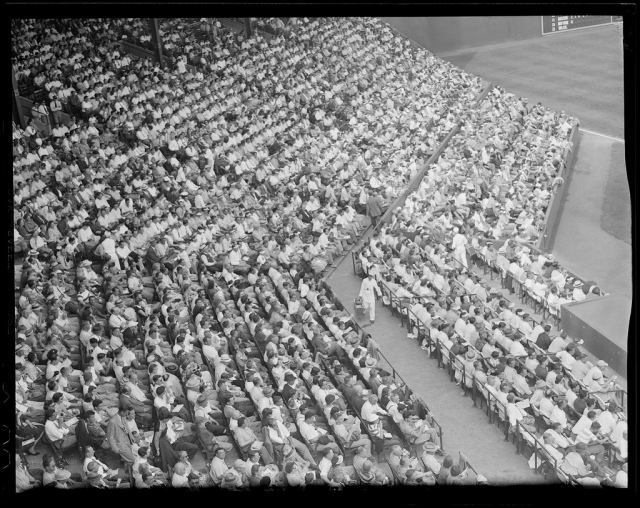 The Fenway Faithful responded in ways they had never done before as 1, 416, 944 fans watched the Red Sox at Fenway Park, the first time a Red Sox team ever drew over a million fans.

While the Red Sox wrapped things up in early September, in the National League, the Dodgers and Cardinals finished in a dead heat. This forced the first ever playoff situation to decide a league champion and the Cardinals prevailed winning the first two games of a best of three series.

As the Cardinals and Dodgers battled , the Red Sox played an exhibition against an American League all-star squad. During the game Ted Williams was hit on the elbow. An incident which had dire consequences. But more on that in a minute. 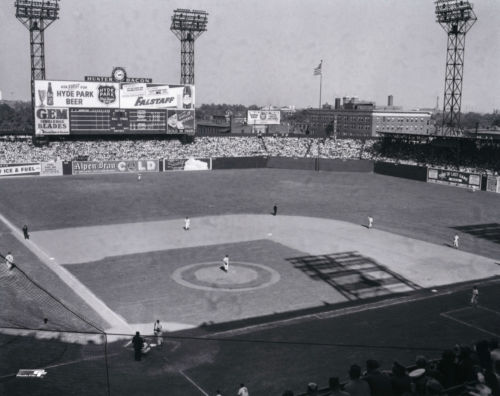 The oddsmakers installed the Red Sox as better than two to one favorites to win the Series and when the they won the sixth game to take a three games to two lead; it appeared as if they were correct and the Red Sox would hoist yet another World Championship banner at Fenway Park. Remember, they had never lost a World Series.

The teams returned to St. Louis for games six and seven and a date with destiny. St.Louis won the sixth game sending the Series to a winner take all match the following day. 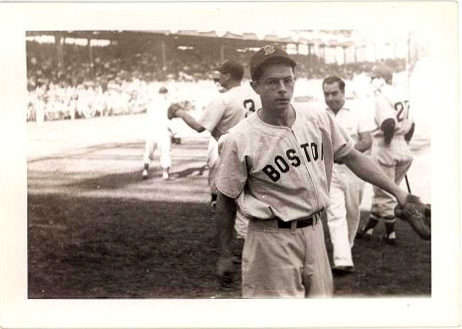 Trailing 3-1 in the top of the eighth inning, the Red Sox tied the game on a two out, two run double setting up one of the most famous plays in World Series history. 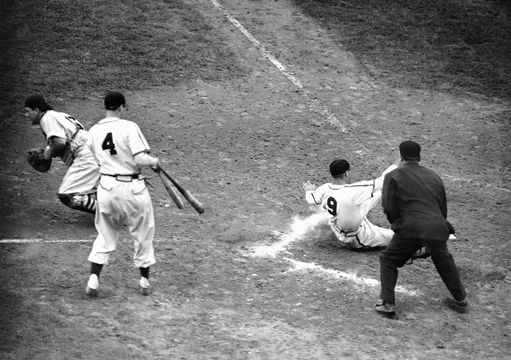 Slaughter led off the bottom of the eighth with a single and he was still on first with two outs when Harry “the Hat” Walker stepped to the plate. He lined what appeared to be a single to left center field and Slaughter never stopped, scoring all the way from first; putting $3,742.34 cents into the pockets of his mates while the Red Sox had to settle for the losers share of $2,140.89. Fighting off his elbow injury Ted Williams struggled throughout the Series going 5-25 with only one RBI. To his eternal credit, he never once used his elbow injury as an excuse for his less than stellar performance.

In 1997 my twelve-year-old son and I got to meet Hall of Famer Enos “Country” Slaughter. It was at the Hall of Fame and as we approached him, I told him how much a part of Fenway Park and Red Sox lore was the story of his mad dash. The 81 year old legend looked at me with a smile and a twinkle in his eye and he said, “October 15, 1946, Sportsman’s Park, 4:09 PM”. I smiled back and thought to myself how, in this lifetime, we can literally be defined by a moment.

And so it was at this time in Fenway Park history, World Series time, 1946.

Hello and welcome, my name is Raymond Sinibaldi. An educator for more than two decades, a baseball fan for nearly 60 years, I have authored four books about baseball and her glorious history; with a fifth on the way in late spring of 2015; the first, The Babe in Red Stockings which was co-authored with Kerry Keene and David Hickey. It is a chronicle of Babe's days with the Red Sox. We also penned a screenplay about Babe's Red Sox days so if any of you are Hollywood inclined or would like to represent us in forwarding that effort feel free to contact me through my email. In 2012 we three amigos published Images of Fenway Park in honor of the 100th birthday of Fenway Park. That led to the creation of this blog. The following year, 2013 came my first solo venture, Spring Training in Bradenton and Sarasota. This is a pictorial history of spring training in those two Florida cities. The spring of 2014 brought forth the 1967 Red Sox, The Impossible Dream Season. The title speaks for itself and it also is a pictorial history. Many of the photos in this book were never published before. The spring of 2015 will bring 1975 Red Sox, American League Champions. Another pictorial effort, this will be about the Red Sox championship season of 1975 and the World Series that restored baseball in America. I was fortunate enough to consult with sculptor Franc Talarico on the “Jimmy Fund” statue of Ted Williams which stands outside both Fenway Park and Jet Blue Park Fenway South, in Fort Myers Florida. That story is contained in the near 300 posts which are contained herein. This blog has been dormant for awhile but 2015 will bring it back to life so jump on board, pass the word and feel free to contact me about anything you read or ideas you may have for a topic. Thanks for stopping by, poke around and enjoy. Autographed copies of all my books are available here, simply click on Raymond Sinibaldi and email me.
View all posts by fenwaypark100 →
This entry was posted in Fenway Park Baseball and tagged 1946 World Series, Bobby Doerr, Dom DiMaggio, Enos "Country" Slaughter, Fenway Park, Johnny Pesky, Red Sox, Ted Williams. Bookmark the permalink.