After the Red Sox won the 1918 World Series, the Fenway Faithful waited 28 years before hoisting another American League pennant. After the 1946 AL Champs raised their flag it was another 21 years before they got to do it again. They came close in 1972, collapsed in 1974 but in the midst of that collapse, these two kids arrived from Pawtucket. 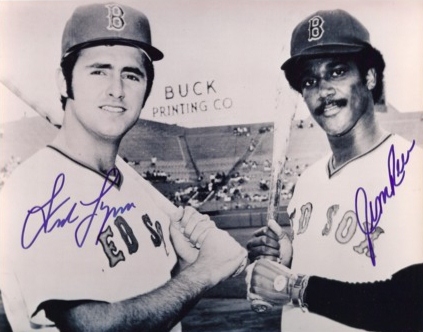 Fred Lynn hit .419 in just 22 September games and Jim Rice showed power that despite the disappointment of the collapse, had the Fenway Faithful excited as they couldn’t “wait till next year.” Spring training 1975 brought with it, hope!

These two rookies joined a team which included, Carlton Fisk behind the plate, Rick Burleson “the Rooster” at short, Rico Petrocelli, the 1967 shortstop, had moved over to third, the ageless wonder “Yaz” had moved to first base, a 23-year-old Dwight Evans was in right and Denny Doyle who was acquired from the Angels in June, took over at second base. The “Goldust Twins” of Lynn and Rice were in center and left respectively and they comprised a rookie tandem, the likes of which Fenway Park had never seen. 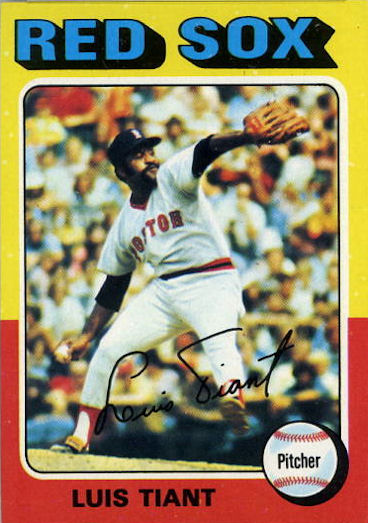 The pitching staff was anchored by Luis Tiant who just two years earlier had been written off but was a 20 game winner in 1973 and 74. The rotation included Bill Lee, Rick Wise and Reggie Cleveland with Dick Pole and Rogilio Moret splitting duties as the fifth starter. 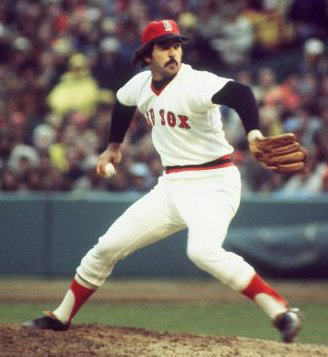 The closer was Dick Drago who had eight saves the last month of the seasons and saved two of the three wins in the AL Championship series.

On June 29th the Red Sox beat the Yankees and Jim “Catfish” Hunter in a come from behind 3-2 win that put them in first place by a half game. They never again trailed and when they reeled off 10 straight wins in early July, they stretched the lead to 6 1/2 games.

They clinched the AL East with four games to go and then swept the three-time defending champion Oakland A’s in the ALCS setting the stage for what still is often referred to as the greatest World Series in baseball history, the Boston Red Sox versus Cincinnati’s Big Red Machine.

The 1975 World Series for the ages opened up at Fenway Park. It was a 0-0 game in the bottom half of the seventh inning with Luis Tiant and Don Gullett locked in the scoreless duel. Tiant and Boston prevailed 6-0 with Luis not only hurling the shutout but singling and scoring the games first run. 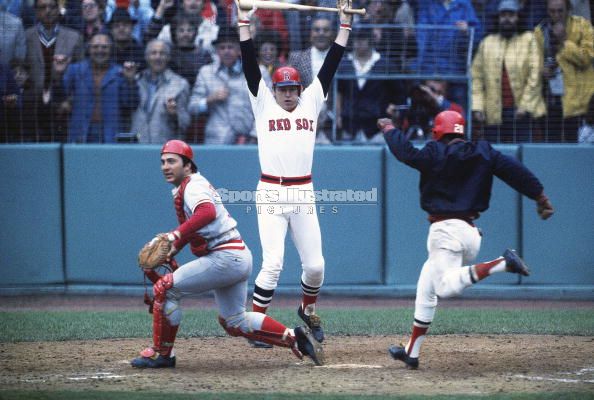 The next three games were decided by one run and when the Reds took game five 6-2 at Riverfront Stadium the Red Sox were on the brink of elimination. The Series shifted to Fenway Park for what Red Sox fans now simply refer to as Game Six! 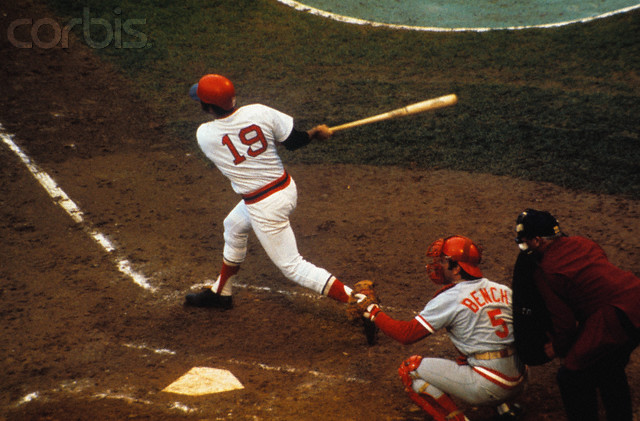 It opened with a three run homer by Fred Lynn in the first inning. 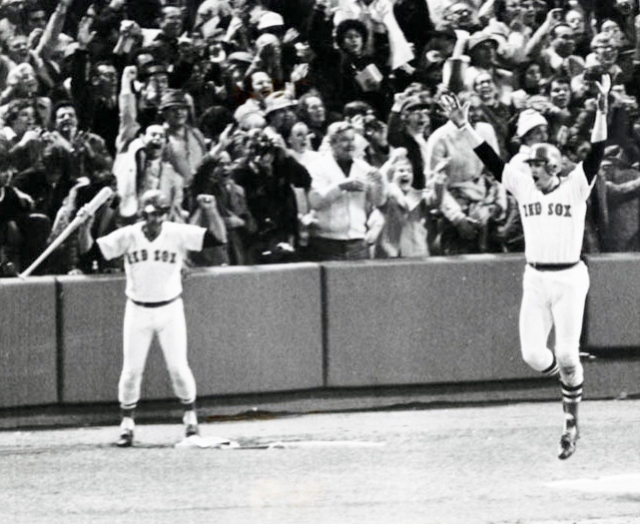 It ended with Carlton Fisk hitting the foul pole to win it in the bottom of the twelfth, 7-6 and tie the Series.

And in between there was, 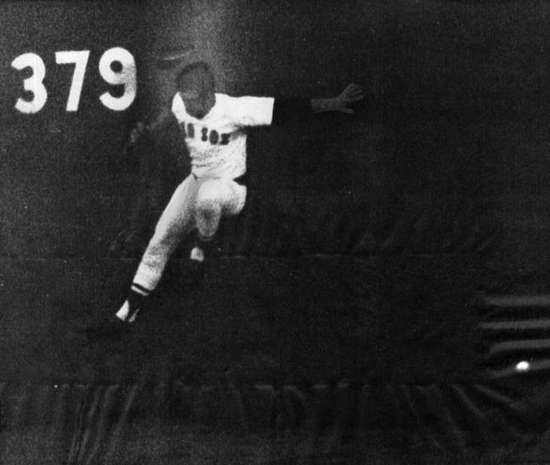 Fred Lynn in a heap at the base of the wall in the fifth inning following his attempt to catch Ken Griffey’s (Daddy) triple. It was this near disaster which led to padding on the outfield wall. 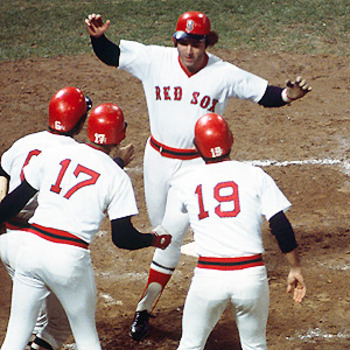 Bernie Carbo’s pinch hit three run homer with two outs in the bottom of the eighth to tie the game 6-6. 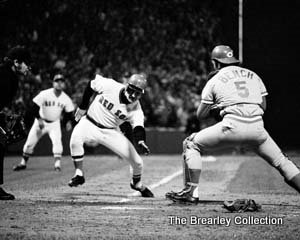 Denny Doyle being thrown out at home by George Foster in the bottom of the tenth with what would have been the winning run. 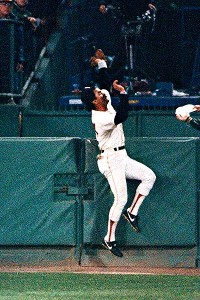 Dwight Evans catch robbing Joe Morgan of a home run in the top of the eleventh inning and then….. 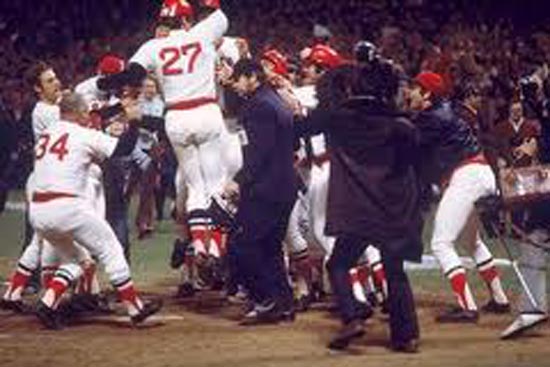 The Reds won the following night and were crowned World Champs. Five of the seven games in the Series were decided by one run and the 1975 World Series restored baseball to its rightful position as America’s Pastime. The winner’s share was $19,060.45 while the Red Sox pocketed $13,325.86 each. Last year the MLB Network called Game Six the Greatest Game Ever Played, take five minutes and tip toe back thirty-seven years and have fun!              http://www.youtube.com/watch?v=QmRC3RwZNmU

A month later, Fred Lynn became the first player in major league history to be named Rookie of the Year and MVP in the same season.

And so it was at this time in Fenway Park history, 1975, World Series time.

Hello and welcome, my name is Raymond Sinibaldi. An educator for more than two decades, a baseball fan for nearly 60 years, I have authored four books about baseball and her glorious history; with a fifth on the way in late spring of 2015; the first, The Babe in Red Stockings which was co-authored with Kerry Keene and David Hickey. It is a chronicle of Babe's days with the Red Sox. We also penned a screenplay about Babe's Red Sox days so if any of you are Hollywood inclined or would like to represent us in forwarding that effort feel free to contact me through my email. In 2012 we three amigos published Images of Fenway Park in honor of the 100th birthday of Fenway Park. That led to the creation of this blog. The following year, 2013 came my first solo venture, Spring Training in Bradenton and Sarasota. This is a pictorial history of spring training in those two Florida cities. The spring of 2014 brought forth the 1967 Red Sox, The Impossible Dream Season. The title speaks for itself and it also is a pictorial history. Many of the photos in this book were never published before. The spring of 2015 will bring 1975 Red Sox, American League Champions. Another pictorial effort, this will be about the Red Sox championship season of 1975 and the World Series that restored baseball in America. I was fortunate enough to consult with sculptor Franc Talarico on the “Jimmy Fund” statue of Ted Williams which stands outside both Fenway Park and Jet Blue Park Fenway South, in Fort Myers Florida. That story is contained in the near 300 posts which are contained herein. This blog has been dormant for awhile but 2015 will bring it back to life so jump on board, pass the word and feel free to contact me about anything you read or ideas you may have for a topic. Thanks for stopping by, poke around and enjoy. Autographed copies of all my books are available here, simply click on Raymond Sinibaldi and email me.
View all posts by fenwaypark100 →
This entry was posted in Fenway Park Baseball and tagged 1975 World Series, Bernie Carbo, Carlton Fisk, Denny Doyle, Dick Drago, Dwight Evans, Fenway Park, Fred Lynn, Game Six, Goldust Twins, Jim Rice, Luis Tiant, Red Sox. Bookmark the permalink.