“A ground ball, stabbed by Foulke…..He underhands to first and the Red Sox are the World Champions. For the first time in 86 years the Red Sox have won baseball’s world championship. Can you believe it”? Joe Castiglione

A slight disagreement between ARod and Jason Varitek turns into… 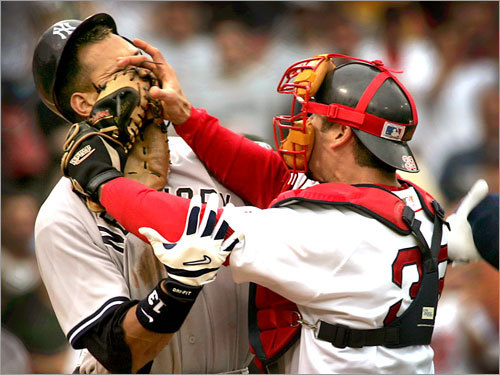 A leather sandwich for the Yankee third baseman and ignites a spark that turns around the Red Sox season.

On Saturday October 16, 2004 the New York Yankees defeated the Boston Red Sox 19-8 at Fenway Park to take a three games to nothing lead in the ALCS and turn Fenway into a morgue.

The next night they were ahead 4-3 in the bottom of the ninth and Mariano Rivera entered the game needing just three outs to win the game, sweep the series and send the Fenway Faithful home to ponder once again when, if ever, will the Red Sox win another World Series. 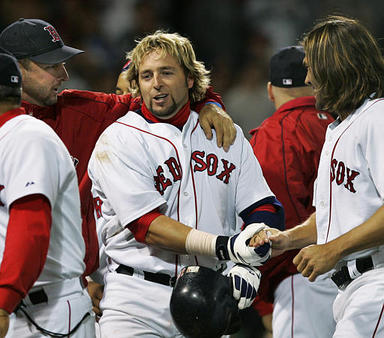 Kevin Millar led off with a walk and Dave Roberts ran for him, 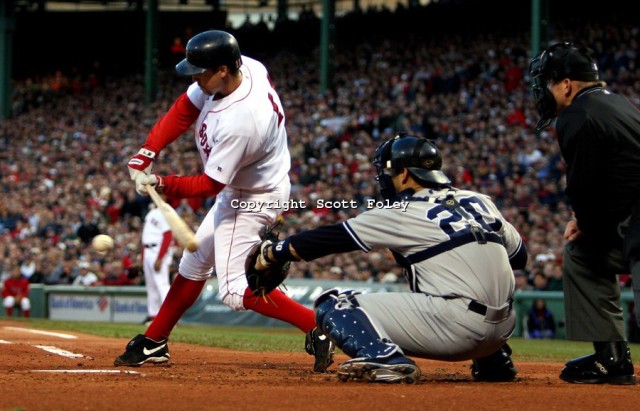 on a single by Bill Mueller to tie the score and set up the 12th inning heroics of, this man,

The following night, with the Red Sox losing 4-2 in the bottom of the eighth inning and once again on the brink of elimination, Ortiz led off with a home run and when Jason Varitek hit a sacrifice fly with two outs, the game was tied. Setting up yet more heroics for the man they call, Big Papi! 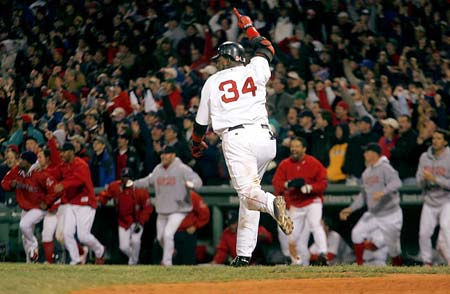 “Papi” singled in Manny Ramirez in the bottom of the 14th sending the Fenway Faithful into a frenzy, keeping the Red Sox alive and sending the ALCS back to Yankee Stadium for yet another Game Six!

Before the game, Curt Schilling underwent a procedure in the clubhouse in which his popping ankle tendon was stapled and sutured. He limped to the mound at Yankee Stadium and pitched his way into Fenway Folklore and baseball history with seven innings of courage and guile; surrendering but one run before turning the ball and game over to Bronson Arroyo with the Red Sox leading 4-1. The Red Sox prevailed 4-2 and in so doing they made baseball history becoming the first team ever to be trailing in a post season series three games to none and come back to win three straight. The following night they sought to make history once again.

In the first inning it was Big Papi who set the tone with a two run homer staking the Red Sox to a 2-0 lead. 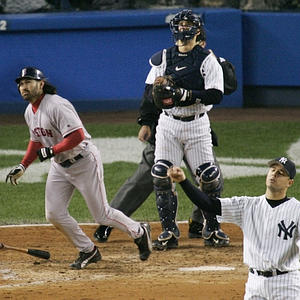 And then Johnny Damon took over hitting a grand slam home run in the second inning and a two run homer in the fourth.

Derek Lowe took over from Damon, leaving after six innings with an 8-1 lead and propelling the Red Sox into history!

And on October 20, 2004 the Red Sox celebrated their trek into baseball history on the grass at Yankee Stadium.

And in the very first inning, David Ortiz stepped in with two men on, nobody out and….. 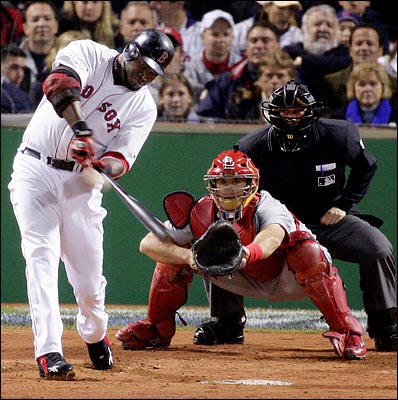 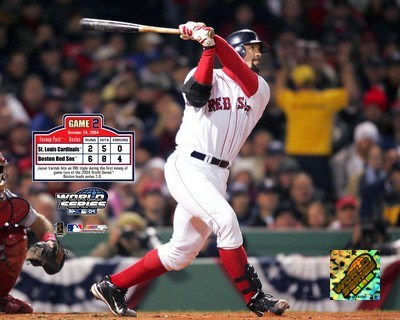 Behind the bat of Jason Varitek and the arm of Curt Schilling, they won game two, 6-2.

In what was Pedro’s last game pitched for the Red Sox, he won 4-1 in game three of the Series. And…..

On October 27, 2004 at 11:40 PM in St. Louis Missouri, the Boston Red Sox won the World Series. It was their first World Series Championship since Babe Ruth wore a Red Sox uniform in 1918. Each member of the Red Sox received $223,619.79, and the undying love, admiration and gratitude of the Royal Rooters, the Fenway Faithful, Red Sox Nation! 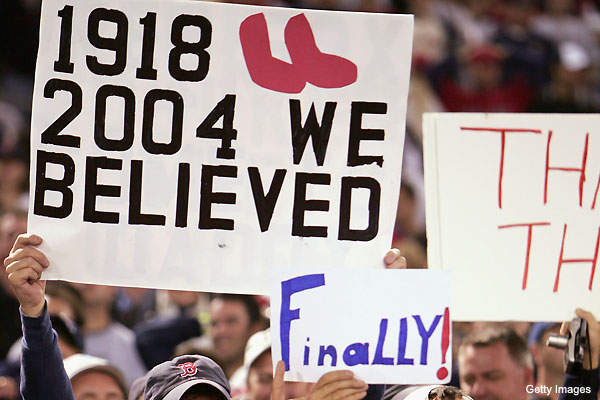 Hello and welcome, my name is Raymond Sinibaldi. An educator for more than two decades, a baseball fan for nearly 60 years, I have authored four books about baseball and her glorious history; with a fifth on the way in late spring of 2015; the first, The Babe in Red Stockings which was co-authored with Kerry Keene and David Hickey. It is a chronicle of Babe's days with the Red Sox. We also penned a screenplay about Babe's Red Sox days so if any of you are Hollywood inclined or would like to represent us in forwarding that effort feel free to contact me through my email. In 2012 we three amigos published Images of Fenway Park in honor of the 100th birthday of Fenway Park. That led to the creation of this blog. The following year, 2013 came my first solo venture, Spring Training in Bradenton and Sarasota. This is a pictorial history of spring training in those two Florida cities. The spring of 2014 brought forth the 1967 Red Sox, The Impossible Dream Season. The title speaks for itself and it also is a pictorial history. Many of the photos in this book were never published before. The spring of 2015 will bring 1975 Red Sox, American League Champions. Another pictorial effort, this will be about the Red Sox championship season of 1975 and the World Series that restored baseball in America. I was fortunate enough to consult with sculptor Franc Talarico on the “Jimmy Fund” statue of Ted Williams which stands outside both Fenway Park and Jet Blue Park Fenway South, in Fort Myers Florida. That story is contained in the near 300 posts which are contained herein. This blog has been dormant for awhile but 2015 will bring it back to life so jump on board, pass the word and feel free to contact me about anything you read or ideas you may have for a topic. Thanks for stopping by, poke around and enjoy. Autographed copies of all my books are available here, simply click on Raymond Sinibaldi and email me.
View all posts by fenwaypark100 →
This entry was posted in Fenway Park Baseball and tagged 2004 World Series, Babe Ruth, Big Papi, Bill Mueller, Curt Schilling, Dave Roberts, David Ortiz, Derek Lowe, Fenway Faithful, Fenway Park, Jason Varitek, Johnny Damon, Kevin Millar, Pedro Martinez, Red Sox. Bookmark the permalink.