The 2012 Plantation Community Foundation Celebrity Golf Classic, Where the Green Meets the Green.

I am a man of many blessings and one for which I am and will always be grateful evermore is an ability to view the world through the eyes and heart of the ten-year old boy who still lives in me. There is nothing which brings him out more than my yearly privilege to handle the responsibilities of emcee at the Otto Graham Memorial Putting Contest for the Plantation Foundation Celebrity Classic every February.

The tournament is in its third decade and since the inception of the foundation, over $2,000,000 has been raised.

The putting green is laid out in a nine-hole challenge where celebrity pairs competed to best the score shot by Plantation’s Director of Golf Operations Keith Struble and Head Pro Mike Domalski. Yesterday they shot 17. 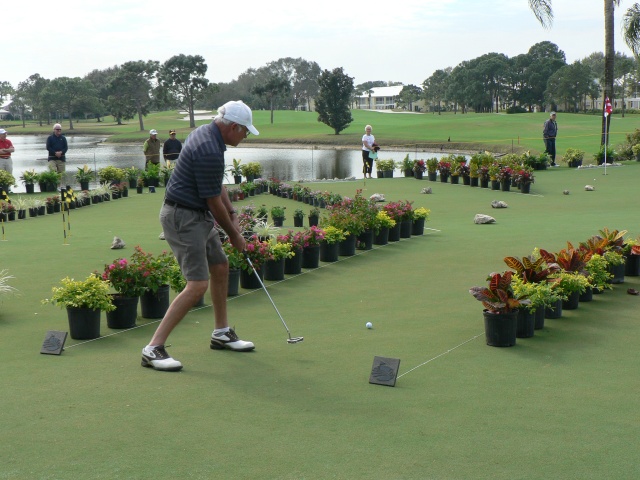 The Voice of the Red Sox, Joe Castiglione, hits his putt on the first hole of the challenge.

Castiglione is entering his 29th year as the radio voice of the Red Sox. An astute student of the history of baseball, Joe has collected an extensive library on the games history. He recently donated over 400 books about baseball to the Boston Public Library.

The team of Rookies of the Year, finish up their ninth hole of the challenge. Gary Peters (left) and Don Schwall paired up for this event.

Rico joined the Red Sox in 1963 and played through the 1976 season. A member of the 1965 all-star team he hit 40 home runs in 1969 becoming the first American League shortstop to crack the 40 home run barrier. A long time Fenway favorite, Rico hit 210 career home runs. 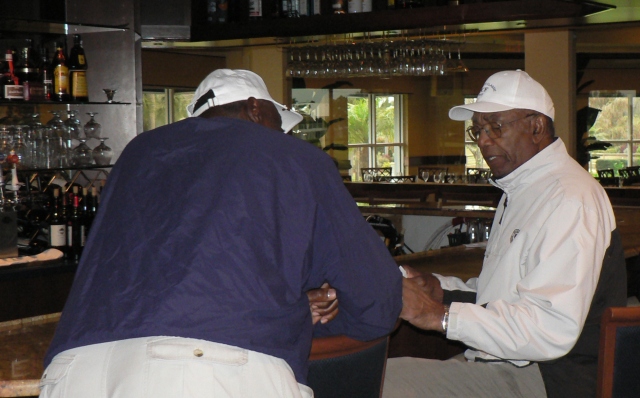 Sam Jones (right) confers with his partner Cazzie Russell before the contest begins.

Sam played for the Boston Celtics for 12 seasons from 1957-1969. He won ten World Championship rings with the Celtics including eight in a row from 1959-1966. In 1984 he was inducted into the Basketball Hall of Fame and in 1996 he was named one of the 50 greatest players in the history of the NBA. Cazzie was one of the greatest college basketball players of all time and the overall number one pick of the New York Knicks in 1966. He played 12 seasons in the NBA and was a member of the 1970 World Champion New York Knicks.

Jim broke in with the St. Louis Browns in 1952 and was traded to the White Sox the following year. He played 10 seasons in the big leagues and was a member of the 1959 “Go Go” White Sox American League champs.

Votto played in the event for the first time this year. The 2010 National League MVP is a two-time all star and he has led the national league in on base percentage the last two seasons.

Keith summed up the events of the day best when he said the real winner of the day was the Plantation Foundation and the countless charities they serve. Oh, and I forgot to tell you about what happened when 1967 met 2012. Tomorrow…..

Hello and welcome, my name is Raymond Sinibaldi. An educator for more than two decades, a baseball fan for nearly 60 years, I have authored four books about baseball and her glorious history; with a fifth on the way in late spring of 2015; the first, The Babe in Red Stockings which was co-authored with Kerry Keene and David Hickey. It is a chronicle of Babe's days with the Red Sox. We also penned a screenplay about Babe's Red Sox days so if any of you are Hollywood inclined or would like to represent us in forwarding that effort feel free to contact me through my email. In 2012 we three amigos published Images of Fenway Park in honor of the 100th birthday of Fenway Park. That led to the creation of this blog. The following year, 2013 came my first solo venture, Spring Training in Bradenton and Sarasota. This is a pictorial history of spring training in those two Florida cities. The spring of 2014 brought forth the 1967 Red Sox, The Impossible Dream Season. The title speaks for itself and it also is a pictorial history. Many of the photos in this book were never published before. The spring of 2015 will bring 1975 Red Sox, American League Champions. Another pictorial effort, this will be about the Red Sox championship season of 1975 and the World Series that restored baseball in America. I was fortunate enough to consult with sculptor Franc Talarico on the “Jimmy Fund” statue of Ted Williams which stands outside both Fenway Park and Jet Blue Park Fenway South, in Fort Myers Florida. That story is contained in the near 300 posts which are contained herein. This blog has been dormant for awhile but 2015 will bring it back to life so jump on board, pass the word and feel free to contact me about anything you read or ideas you may have for a topic. Thanks for stopping by, poke around and enjoy. Autographed copies of all my books are available here, simply click on Raymond Sinibaldi and email me.
View all posts by fenwaypark100 →
This entry was posted in Fenway Park Baseball, Fenway Park Other and tagged "Jungle Jim" Rivera, 1967, Boston Celtics, Cazzie Russell, Celebrity Golf Classic, Don Schwall, Fenway Park, Gary Peters, Joe Castiglione, Joey Votto, Keith Struble, Plantation Community Foundation, Plantation Golf and Country Club, Red Sox, Rico Petrocelli, Ron Noble, Sam Jones. Bookmark the permalink.