“Any other gentleman on this club that hits .390 will not have to wear a necktie either.” Joe McCarthy

Thirty days have September, April, June and November, all the rest have 31 except February which has 28. Except of course for leap year when it has 29! What? I learned that “poem” if can call it that, from Mrs. Kane, my second grade teacher at the James Humphrey School in Weymouth Massachusetts.

It has proved to be a worthwhile tool as I often recite it when figuring out which months have the requisite 30 or 31 days. Except of course February. Well, did you ever wonder why we do this every four years? Well here you go. There are 365 days in a year right? And, of course, the year is measured by the amount of time it takes us here on earth to orbit around the sun. Well, sort of, it actually takes 365 days and six hours to orbit one time around the sun. Now stay with me here, 6 hours times four, is 24! Twenty-four, hmmmm that’s how many hours in a day right? Hence we’ve just added a day soooo every fourth year we add a day and voila, here we are, the added day! I suppose the calendar folks chose February because it was so shortchanged.

Now here’s the kicker, it actually takes 365 days, 5 hours, 49 minutes, and 16 seconds for earth to orbit the sun. So I was thinking, that’s 10 minutes and 44 seconds short of 365 days and six hours, so what do we do when that differentiation adds up to another day? Whew, that’s way above my pay grade but I’m sure the smart folks who govern such things have it under control! 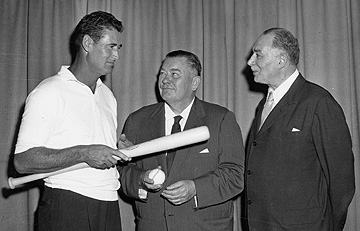 Well, by now you’re asking yourself what in the hell does this have to do with Fenway Park or the Red Sox? The more astute observers among you may even be asking, what does it have to do with Ted Williams?

You see Ted Williams was known for various and sundry quirks. Among them was he rarely, if ever wore a tie. Even at his Hall of Fame induction in 1966 he was tieless.

Even when he was present  at the Hall of fame inductions as an old-timer, he never wore a tie. It became a bit of a problem in 1948 when the new Red Sox skipper Joe McCarthy laid down the “rule” that all players would wear a jacket and tie when in public.

The Boston writers knowing this would be fodder for their writing mill, jumped on McCarthy and asked him about Williams. Joe said that this would not apply to Ted. In true Boston sportswriter fashion, they pressed him about the double standard. McCarthy paused, took a deep breath and said, “I want to be fair about this, any other gentleman on this club that hits .390 will not have to wear a necktie either.” Case closed!

Later that day, McCarthy appeared in the lobby of the Sarasota Florida hotel, sans necktie. Oh, the date, February 29, 1948.

Hello and welcome, my name is Raymond Sinibaldi. An educator for more than two decades, a baseball fan for nearly 60 years, I have authored four books about baseball and her glorious history; with a fifth on the way in late spring of 2015; the first, The Babe in Red Stockings which was co-authored with Kerry Keene and David Hickey. It is a chronicle of Babe's days with the Red Sox. We also penned a screenplay about Babe's Red Sox days so if any of you are Hollywood inclined or would like to represent us in forwarding that effort feel free to contact me through my email. In 2012 we three amigos published Images of Fenway Park in honor of the 100th birthday of Fenway Park. That led to the creation of this blog. The following year, 2013 came my first solo venture, Spring Training in Bradenton and Sarasota. This is a pictorial history of spring training in those two Florida cities. The spring of 2014 brought forth the 1967 Red Sox, The Impossible Dream Season. The title speaks for itself and it also is a pictorial history. Many of the photos in this book were never published before. The spring of 2015 will bring 1975 Red Sox, American League Champions. Another pictorial effort, this will be about the Red Sox championship season of 1975 and the World Series that restored baseball in America. I was fortunate enough to consult with sculptor Franc Talarico on the “Jimmy Fund” statue of Ted Williams which stands outside both Fenway Park and Jet Blue Park Fenway South, in Fort Myers Florida. That story is contained in the near 300 posts which are contained herein. This blog has been dormant for awhile but 2015 will bring it back to life so jump on board, pass the word and feel free to contact me about anything you read or ideas you may have for a topic. Thanks for stopping by, poke around and enjoy. Autographed copies of all my books are available here, simply click on Raymond Sinibaldi and email me.
View all posts by fenwaypark100 →
This entry was posted in Fenway Park Baseball and tagged Fenway Park, Joe McCarthy, Leap Year, Red Sox, Ted Williams. Bookmark the permalink.