The game of baseball produces buckets full of oddities and Fenway Park has witnessed more than her share in her first century of existence. Today’s first installment of Fenway’s foibles involves none other than Mickey Mantle. 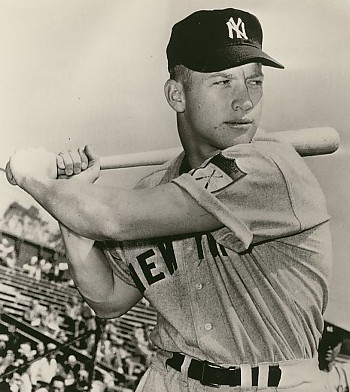 Mickey Charles Mantle made his debut on April 17, 1951 against the Red Sox at Yankee Stadium.

Wearing the number six, he played right field and was inserted in the third spot in the order by manager Casey Stengal. His first at bat was a right-handed one and came against this man, 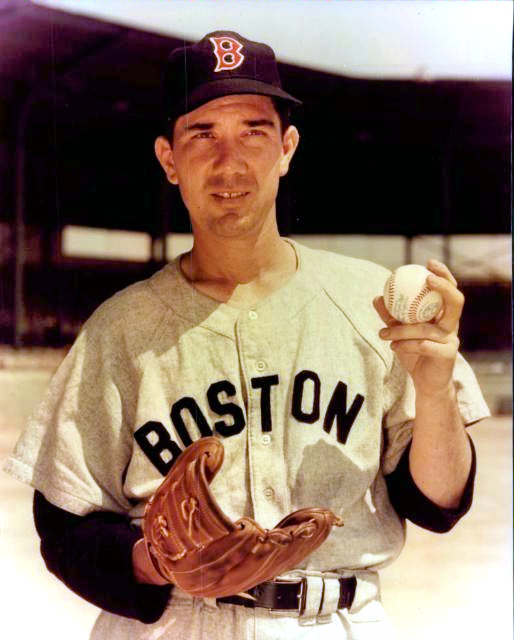 He grounded out to second base to end the first inning. His first hit, also produced his first RBI in the sixth inning when, still facing Wight, he singled in Jackie Jensen giving the Yankees a 3-0 lead. He scored his first run two batters later when Yogi Berra singled him in stretching the lead to 4-0 in a game the Yankees eventually won five zip. 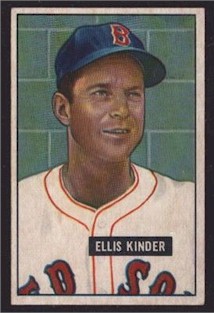 Mantle’s Fenway debut would come nine days later when he pinch hit for third baseman Billy Johnson in the ninth inning of a game the Red Sox won 13-7. Red Sox port-sider Ellis Kinder struck him out.

The next day, Mick was in right field and leading off and the Red Sox completed a sweep of the short two game set winning 4-3. Mantle went 0-4 with a walk. When he and the Yankees returned to Fenway it was May 28th and he was playing right field but was now batting sixth. He went 0-4 and when the teams gathered for a Memorial Day doubleheader two days later, he was in the seventh spot.

The Red Sox starter in the first game was, 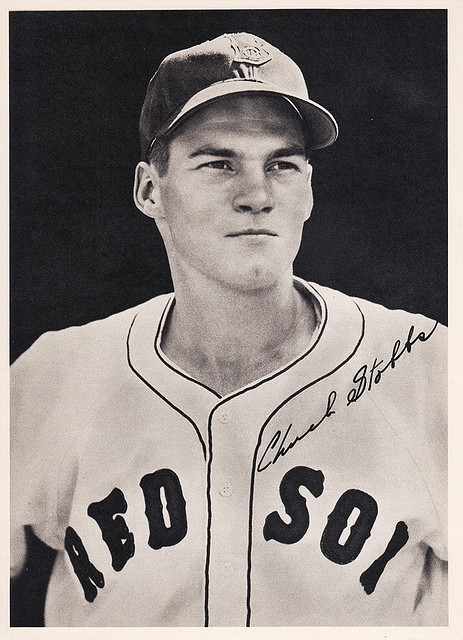 Stobbs had made his debut as a 17-year-old in 1947 and was in the fifth year of a 15 year career which would see him go 107-130 with four teams. On this day the Red Sox lefty was to face Mickey Mantle three times. The first came in the top of the second inning; New York had two runners on and one out when Mick stepped in, Stobbs struck him out. The second time was with Mantle leading off the fifth, he struck him out. Mantle came up again in the sixth inning with two outs and Joe DiMaggio on second and Stobbs got him on strikes for the third time in a row. In the seventh inning, Casey Stengal pinch hit for Mantle with Jackie Jensen who hit a two run homer to give the Yankees the lead. 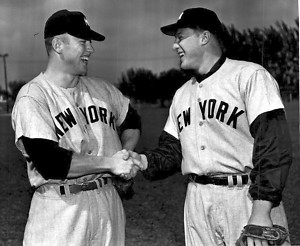 Both Stobbs and Mantle were in the clubhouse when the first game finally came to an end in the bottom of the 15th on a home run by Red Sox shortstop Vern Stephens giving the Red Sox an 11-10 win. 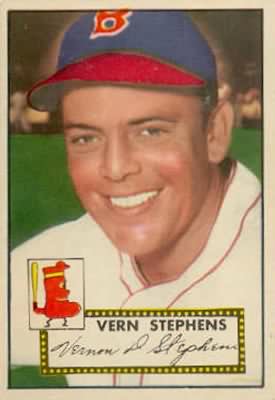 When Stengal handed the home plate umpire the lineup for the second game, Mantle’s name was penciled in, leading off and playing right field. On the Fenway mound for the Sox was Mick’s old friend Bill Wight, another southpaw.

Leading off the game, Mantle went down on strikes and did so again in the third inning. He was scheduled to lead off the top of the sixth but when the Yankees took the field in the fifth Cliff Mapes was in right field. 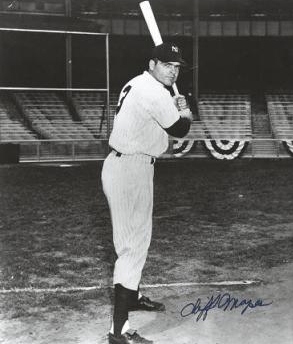 And rookie Mickey Mantle’s day of futility was over. He had batted five times and punched out five times! The 19-year-old Mantle was sent to the minor leagues before the end of the 1951 season only to return in ’52’ wearing the number seven and setting a course that would make him the greatest switch-hitter in baseball history.

The names of Mantle and Stobbs became forever linked when Stobbs delivered the pitch that Mick hit clear out of Griffith Stadium in Washington DC. 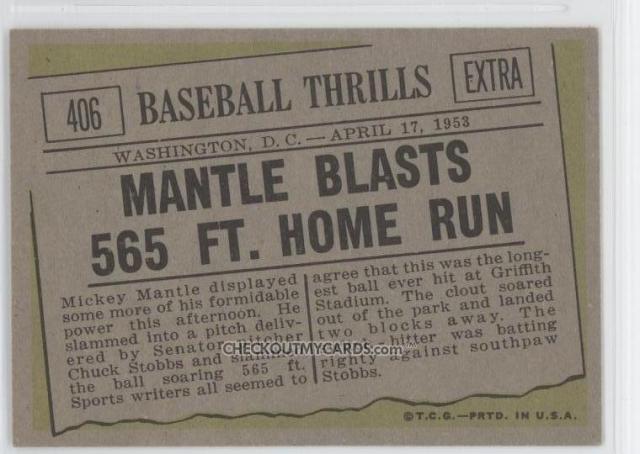 Jackie Jensen would go on to win an MVP Award as the Red Sox right fielder in 1958. 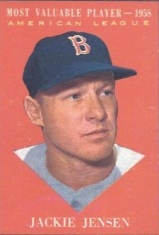 And Cliff Mapes has the distinct honor as the last Yankee to wear the number 3, before it was officially retired in 1948! 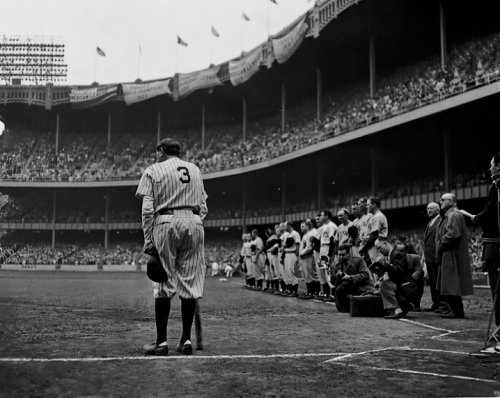 Mantle enjoyed enormous success at Fenway Park. In fact it was, except for Tiger Stadium, his favorite place to visit. And why not? He hit .311 with 38 home runs and 105 RBI in the 152 games he played there. He said goodbye to baseball from Fenway Park on September 28, 1968. 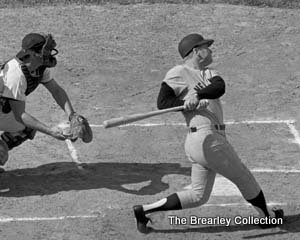 Popping out to short in the first inning…. 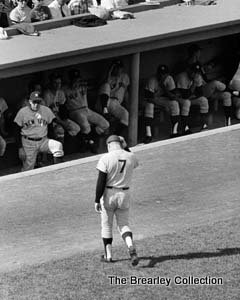 And making his way through the dugout, and into history!

Mickey Mantle was one of the greatest players to ever play at Fenway Park, or any park for that matter. However, on that one day in May of 1951, Red Sox pitchers Chuck Stobbs and Bill Wright struck him out five times in a row, creating a story for their grandkids to be told, and retold and then, told again!

Hello and welcome, my name is Raymond Sinibaldi. An educator for more than two decades, a baseball fan for nearly 60 years, I have authored four books about baseball and her glorious history; with a fifth on the way in late spring of 2015; the first, The Babe in Red Stockings which was co-authored with Kerry Keene and David Hickey. It is a chronicle of Babe's days with the Red Sox. We also penned a screenplay about Babe's Red Sox days so if any of you are Hollywood inclined or would like to represent us in forwarding that effort feel free to contact me through my email. In 2012 we three amigos published Images of Fenway Park in honor of the 100th birthday of Fenway Park. That led to the creation of this blog. The following year, 2013 came my first solo venture, Spring Training in Bradenton and Sarasota. This is a pictorial history of spring training in those two Florida cities. The spring of 2014 brought forth the 1967 Red Sox, The Impossible Dream Season. The title speaks for itself and it also is a pictorial history. Many of the photos in this book were never published before. The spring of 2015 will bring 1975 Red Sox, American League Champions. Another pictorial effort, this will be about the Red Sox championship season of 1975 and the World Series that restored baseball in America. I was fortunate enough to consult with sculptor Franc Talarico on the “Jimmy Fund” statue of Ted Williams which stands outside both Fenway Park and Jet Blue Park Fenway South, in Fort Myers Florida. That story is contained in the near 300 posts which are contained herein. This blog has been dormant for awhile but 2015 will bring it back to life so jump on board, pass the word and feel free to contact me about anything you read or ideas you may have for a topic. Thanks for stopping by, poke around and enjoy. Autographed copies of all my books are available here, simply click on Raymond Sinibaldi and email me.
View all posts by fenwaypark100 →
This entry was posted in Fenway Park Baseball and tagged 1958 MVP, 565 foot home run Griffith Stadium, Babe Ruth, Bill Wight, Casey Stengal, Chusk Stobbs, Cliff Mapes, Ellis Kinder, Fenway Park, Jackie Jensen, Mickey Mantle, Red Sox, Vern Stephens. Bookmark the permalink.