From 1933-1941 he hurled an opening day toss every year except 1939 and his record was .500 as the Senators won four and lost four. He also became the first president to throw out the first pitch at a major league baseball all-star game when the game was played at Griffith Stadium in 1937. 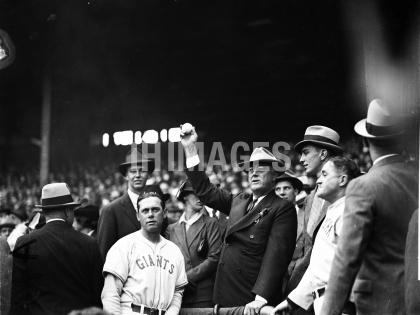 The New Deal architect added two World Series games on his pitching resume. In 1933 he opened the third game of the Series with a pitch in Washington’s Griffith Stadium as the Senators won their only game in that Series, 4-0 over the Giants. The World Series has not been played in the Nation’s Capital since that year! He traveled to the Polo Grounds in 1936 for game two of that subway series and after flipping the first pitch, he watched the Yankees annihilate the Giants 18-4 on their way to a World Series triumph that would turn out to be their first of four straight World Championships.

The Red Sox were twice the opponents of the Senators during FDR’s reign as First Pitcher, and they twice shut out Washington extending their Presidential record to 5-2. As for the hometown Senators, they were 16-9 in Presidential Opening Days  following FDR’s tenure.

Harry S Truman attended 16 games while he was President, all in Washington and seven of them to throw out the first pitch of the season which he did in every year of his Presidency 1946-1952.

HST was the first Presidential southpaw and in fact in 1950 he threw out two first pitches, one lefty and one righty. Truman was a bit streaky as the opening day First Hurler, losing his first three, winning his next three before losing his seventh and final contest leaving him as the first President with a losing mark of 3-4. When he turned the duties over to Dwight Eisenhower, the Senators opening day Presidential record was at 19-13.

Twice during the Truman Administration, the Red Sox were present for opening day and twice they emerged victorious. They were there in ’46’ for Truman’s first, a 6-3 win and his last in ’52’, a 3-0 shutout by Mel Parnell. The Red Sox liked presidential attention as they were now 7-2 in first pitch games by the Chief Executive.

President Truman was a frequent visitor to Griffith Stadium and he was the first president to see a night game, the first to attend a game on July 4th and he made his way there in 1947 to pay tribute to Walter Johnson whose monument was unveiled that evening. 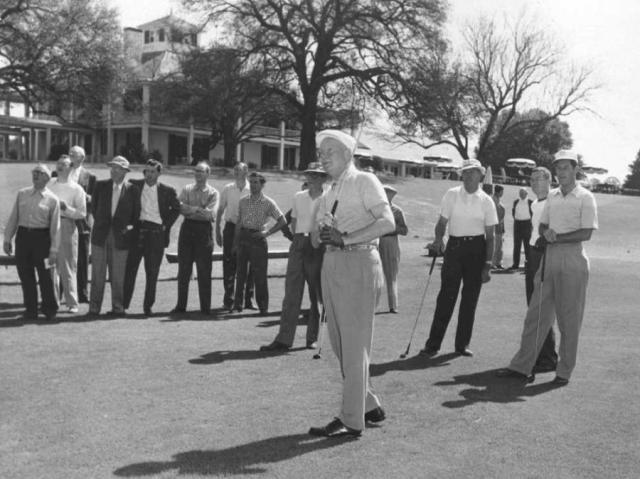 President Eisenhower on the first tee at Augusta National.

When “Ike” took up residence in the Oval Office in 1953, his passion for another sport nearly brought the presidential opening day pitch streak to a halt at seven games. With opening day set in Washington for April 15, 1953, the President opted for a round of golf at Augusta National instead of tending to the presidential duty of hurling the first pitch at Griffith Stadium. Vice-President Richard Nixon was scheduled to pinch-pitch however DC rains postponed the game and the President was able to play his round and hurl the first pitch the following day in Washington.

Under Eisenhower, the presidential opening day first pitch streak reached 13 games as he was present at every opening game except for 1959. In his seven games opening the Senators season with a presidential pitch the home team was 4-3 which is quite an accomplishment as the Senators had established themselves as perennial league doormats. They were now 23-16 following a President’s first pitch.

Twice the Red Sox were opponents under Eisenhower’s Senators and twice they lost, 5-2 in 1958 and 10-1 in 1960. Their record in Presidential First Pitch games was now at 7-4.

When John F Kennedy assumed the Presidency in 1961 he continued the American tradition of opening the season in Washington with a presidential first pitch. It was a historic time for the country and for baseball. JFK was the first president born in the 20th century and for the first time since 1900, major league baseball expanded, adding two teams to the American League. This had a direct effect on Washington. 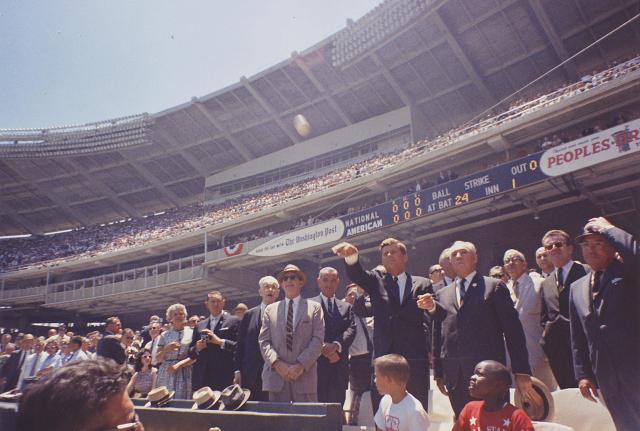 JFK became the second President to open the All Star game with a first pitch at DC Stadium in 1962, The National League prevailed 3-1.

So in 1962, the new Senators got a new stadium which they called appropriately enough DC Stadium. In Kennedy’s three first pitches the Senators, old and new, were 1-2 bringing the Washingtonians 52 year presidential first pitch record to 24-18. The Red Sox were not in Washington during JFK’s presidency so they remained 7-4 when performing in front of the Commander-in-Chief.

And so it was at this time in Fenway Park history, first pitch time.

Hello and welcome, my name is Raymond Sinibaldi. An educator for more than two decades, a baseball fan for nearly 60 years, I have authored four books about baseball and her glorious history; with a fifth on the way in late spring of 2015; the first, The Babe in Red Stockings which was co-authored with Kerry Keene and David Hickey. It is a chronicle of Babe's days with the Red Sox. We also penned a screenplay about Babe's Red Sox days so if any of you are Hollywood inclined or would like to represent us in forwarding that effort feel free to contact me through my email. In 2012 we three amigos published Images of Fenway Park in honor of the 100th birthday of Fenway Park. That led to the creation of this blog. The following year, 2013 came my first solo venture, Spring Training in Bradenton and Sarasota. This is a pictorial history of spring training in those two Florida cities. The spring of 2014 brought forth the 1967 Red Sox, The Impossible Dream Season. The title speaks for itself and it also is a pictorial history. Many of the photos in this book were never published before. The spring of 2015 will bring 1975 Red Sox, American League Champions. Another pictorial effort, this will be about the Red Sox championship season of 1975 and the World Series that restored baseball in America. I was fortunate enough to consult with sculptor Franc Talarico on the “Jimmy Fund” statue of Ted Williams which stands outside both Fenway Park and Jet Blue Park Fenway South, in Fort Myers Florida. That story is contained in the near 300 posts which are contained herein. This blog has been dormant for awhile but 2015 will bring it back to life so jump on board, pass the word and feel free to contact me about anything you read or ideas you may have for a topic. Thanks for stopping by, poke around and enjoy. Autographed copies of all my books are available here, simply click on Raymond Sinibaldi and email me.
View all posts by fenwaypark100 →
This entry was posted in Fenway Park Baseball and tagged Augusta National, DC Stadium, Dwight Eisenhower, FDR, Fenway Park, Griffith Stadium, Harry Truman, JFK, Opening Day First Pitch, Red Sox. Bookmark the permalink.