“There wasn’t many better guys than Moose…A darn good ballplayer too.” Yogi Berra

“Moose” Skowron passed away on April 27th and as always is the case, when one from our youth shuffles off this mortal coil it invokes memories and reflection. 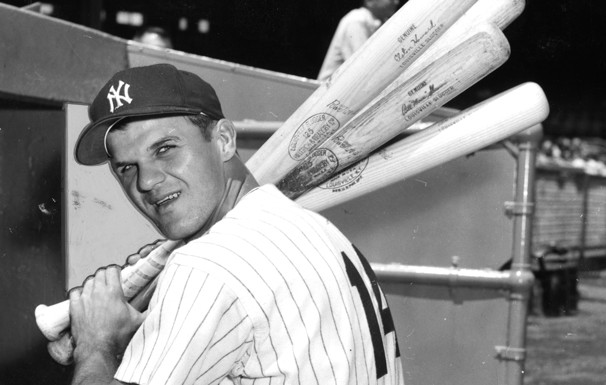 William Joseph Skowron was part of my Fenway story, my baseball story and in ways which today have me smiling. For although “Moose” never played a single game for the Red Sox and on top of that spent the majority of his career with the NY Yankees, he and I are and forever will be connected; connected by the beauty, the joy, the wonder that is baseball!

Skowron made his debut on opening day 1954 at Griffith Stadium in Washington DC.

First let’s take a look at “Moose”, the player. He signed with the Yankees off of the campus of Purdue University where, despite the fact that he threw and batted right-handed, he was a left footed punter on the Boilermakers football team.

Skowron was an All American half back at Purdue.

He played 14 seasons in the big leagues, nine of them with the Yankees, four with the White Sox, one with the Dodgers and he threw in a couple of whistle stops in Washington and California.

In nine years in New York, the Yankees won seven pennants and the big first baseman was part of five World Champion Yankee squads. Then for good measure, he won another ring with the 1963 World Champion Dodgers. He hit .282 throughout his career with 211 home runs. A six-time all-star, he particularly liked playing in October for in 133 World Series at bats, he hit .293 with eight home runs and 29 RBI. Not bad eh? In today’s game he’s a $10,000,000 a year player.

His favorite team was the 1961 Yankees, and it was that Championship ring he chose to always wear and it his the 1961 season in which my connection to him begins. It was Tuesday May 30, 1961, Memorial Day and I was at Fenway Park for the holiday game between the Red Sox and Yankees. I saw history that day and “Moose” was a big part of it. With New York ahead 4-3, Skowron led off the fourth inning with a rocket line drive into Fenway’s left field screen stretching the lead to 5-3. In the sixth inning, after Yogi Berra homered leading off the frame, “Moose” stepped in and launched another homer. This one deep into the Red Sox bullpen in right center field. That one pretty much put the game out of reach as the New Yorkers won by a 12-3 count.

From left to right, Roger Maris, Yogi Berra, Mickey Mantle and “Moose”. On Memorial Day 1961 at Fenway Park, this quartet made history as they hit seven home runs between them with Maris, Mantle and Skowron hitting two each. At the time it was a record for most homers in a game.

It was 30 plus years later when I “reconnected” with “Moose” and that would take place on a little league baseball diamond in Venice Florida. I was coaching a squad and I had a rather cubby little kid on my team who I dubbed “Moose” and I spent the year regaling him with stories about the great Yankee first baseman of the 50s and 60s named “Moose” Skowron. He came to love “Moose” and he also became a pretty good little player as well. I like to think when he learned of Skowron’s passing he thought to himself, “my little league coach named me after him”.

“Moose” signs for one of his many fans.

In 1997 I had the pleasure of meeting “Moose” Skowron. It was in Cooperstown New York and I had the honor of sharing a “signing” with the Yankee all time great. My compadres David and Kerry were signing copies of our “new” book The Babe in Red Stockings. We were accompanied by the ever gracious grand-daughter of the Babe, Linda Ruth Tossetti. She was kind enough to write the foreword for our tome and we were sharing a great day in a great little town. Also present and signing were Enos “Country” Slaughter and four members of the All American Girls Baseball League.

To be in the presence of “Moose” was to know that his presence and booming voice had the ability to capture a room and this day was no different. I must confess I was a bit taken aback by, shall we say his propensity to think he was always in the clubhouse.This led to, at times, an exchange or two in which his conversation was sprinkled with some “salty” adjectives.

Throughout the event, “Moose” would occasionally yell out to us, “you guys don’t leave without talking to me, I want to tell you something”. I was awash in wonder at what “Moose” Skowron could possibly want with us.

The event finished and he rushed over to us with the exuberance of a boy. “I met Babe” he said “and it was the greatest thrill of my career”. He related how when he was in high school he got to play at an all-star event at Yankee Stadium and as each player was introduced he ran up to home plate and shook the hand of Babe Ruth. It was delightful to listen to this man of 67 years relate a story of his youth with such unbounded passion and joy!

Here was a former major leaguer, a very accomplished major leaguer, with a rather extensive resume including all-star games and World Series success; telling me that meeting Babe Ruth as a high school player was the greatest thrill of his life!

I learned two things that day, one that “Moose” Skowron held the key to life and that was simply to always view the world through the eyes of the little boy within and two, I loved him!

“Moose” Skowron passed away last month, he was 81 years young!