Last Friday, August 3rd, my brother and I took in the Red Sox Hall of Fame Induction luncheon at Fenway Park’s EMC Club.

There were seven members (five of them players) added to the Red Sox Hall of Fame and they spanned the 100 years of the existence of Fenway Park.  Two “non uniformed personnel” joined the elite and then there was the “Memorable Moment.” The selection committee is made up of 16 members of “Red Sox broadcasters and executives, past and present media personnel, and representatives from the Sports Museum of New England and the BoSox Booster Club.

First a bit on how this all gets done. To be eligible for the Red Sox Hall of Fame, a player must have played three years with the Red Sox and be retired from baseball for at least three years. The players must receive a 75% of the 16 votes (12) to be inducted. As for the non uniformed personnel and the Memorable Moment, they must be unanimous selections.

Many descendents of Mr. Taylor were on hand to accept this honor and were delighted to do so. In fact it was John I Taylor’s dad who was the founding publisher of the Boston Globe; another Boston institution.

The next inductee was a contemporary of Mr. Taylor’s and he wore a uniform. His name is Hubert Benjamin Leonard, known simply as “Dutch”. He was a southpaw hurler for the Sox from 1913-1918 and he was a dandy. Going 90-64 in his years in a Red Sox uniform, his best season was 1914 when he was 19-5 with an ERA of 0.96. Catch that? I’ll say it again, 0.96. That is a modern major league baseball record! He did that while pitching 224 and 2/3 innings. He won game three of the 1915 World Series and game four of the ’16’ Fall Classic and his 25 career shutouts is the most of any lefthanded pitcher in Red Sox history. 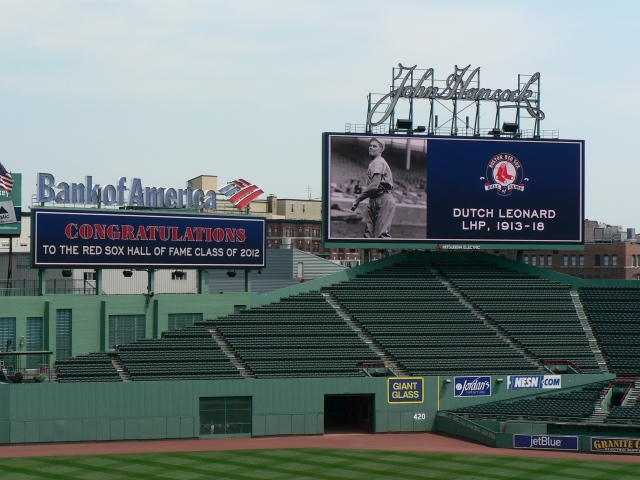 His grandnephew and great grand-nephew were on hand to accept the award and it was grand nephew Steve who spoke on behalf of the family.

The next in line was a pitcher who helped the Sox in their American League pennant winning season of 1946.

Joe Dobson pitched seven season for Boston winning 106 and losing 72 games along the way. He was the complete game winner in game five of the 1946 World Series at Fenway Park against the Cardinals. That win gave the Sox a three games to two lead in the Series which the Cardinals erased in St. Louis in defeating the Red Sox in seven games.

The second of the “non-uniformed” inductees was long time head groundskeeper of Fenway Park, Joe Mooney.

Joe is quite a character and I think a description of a crusty old Irishman fits him to a tee. A legendary defender of the Fenway playing service, I had a first hand experience with his passion for “protecting” the Fenway lawn.

In 1996, David, Kerry and I had received permission from the Red Sox to have our photographs taken inside the park. They were for the inside of the dust jacket for our book The Babe in Red Stockings. It was in November and when we got inside the park it was clear the field was being worked on. There were two dump trucks and a tractor in the outfield. We decided we would like to be on the field, in the first base area, remember this is November. We opened the gate and stepped onto the warning track area by the Red Sox on deck circle. Within seconds, Joe Mooney materialized and he was shouting in no uncertain terms, that we had to, how did he put it, “get the hell off the field”. We took the photos in the stands.

There were three players from more recent days who joined the Fenway Park elite. They were, Marty Barrett

Barrett replaced current Red Sox color man Jerry Remy at second base in 1982 and he held the job for nine seasons. In 1986 he had a post season like few in baseball history have experienced as he knocked out 24 hits, at the time a record, and was the MVP of the 1986 ALCS. One of the “headiest” ball players to ever play the game, he was very adept at the hidden ball trick which was ultimately taken away by a most unlikely source, the umpires. Marty regaled the crowd with how they stopped it and they did so by simply calling time as soon as they could, once the ball returned to the infield and landed in Marty’s glove. They had been embarrassed one time too many by Marty’s talent at fooling opposing baserunners. There have been 18 hidden ball plays in Red Sox history and Marty Barrett and Johnny Pesky have each turned it three times, the only multiple turners of the stunt.

Ellis Burks played six seasons with the Red Sox at the start of his career. In his rookie year of 1987 he became the first Red Sox rookie to hit 20 homers (20) and steal 20 bases (27). His 27 steals that year were the most by a Red Sox rookie since Tris Speaker’s 35 swipes in 1909. Burk’s career came full circle in 2004 when he rejoined the Red Sox in his final season. Although hampered throughout the campaign with injuries, he was a major clubhouse force. So much so that it was Ellis who carried the World Series trophy off the plane when the Champs arrived home from St. Louis. 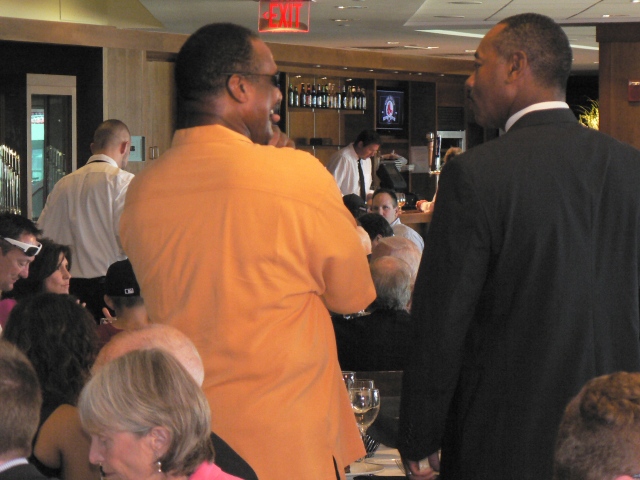 Jim Rice and Ellis Burks share a moment before the festivities begin.

Ellis told a great story of how Jim Rice was his idol as he a kid and the transition that was made between him and Rice; from idol, to teammate to a big brother type and finally to the best of friends.

Jim Rice with members of the Ellis Burks family.

The last player to be introduced was Curt Schilling. And as you can imagine the focus of his story was 2004 and the now famous “Bloody Sock”. It is a story that has been and forevermore will be oft told and it is one that I will never tire of hearing. In case you’ve forgotten, there was the suturing of his detached right ankle tendon which enabled Schilling to pitch, and win, game six of the ALCS against the Yankee and tie the series at three games setting the stage for the miracle’s completion the next night. 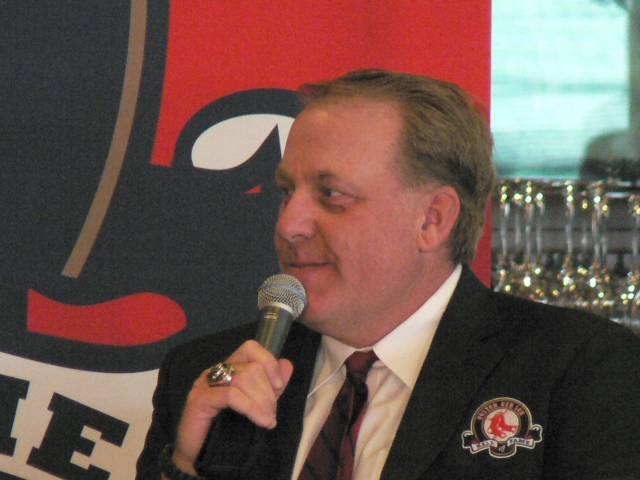 I for one was struck by two things about Schilling. First was his credit and praise for the role Ellis Burks played in the story of 2004 and second how intently he listened to the stories about his fellow inductees. I had read about his passion for baseball history and it was nice to witness that passion first hand.

Schilling played but four seasons with the Red Sox yet you may be hard pressed to find a pitcher, no matter how great, who has had a greater impact upon this franchise. He was 6-1 in eight post season starts with the Red Sox including 2-0 with a 0.79 ERA in two World Series starts. He is truly one of the great clutch pitchers of all time, and come December he will make his first appearance on the National Baseball Hall of Fame ballot. It will be interesting to see how the BBWAA measures his career.

Regardless of their measurement Schilling’s place in Red Sox history and the folklore of Fenway is secure and it was rewarded last Friday.

There was a moment recognized as well. It is a moment that is near and dear to me and will live in my heart for as long as it beats. It is a moment born of a love and a passion which encompasses family, Fenway and me like no other and thus it deserves its own story, which will be next! 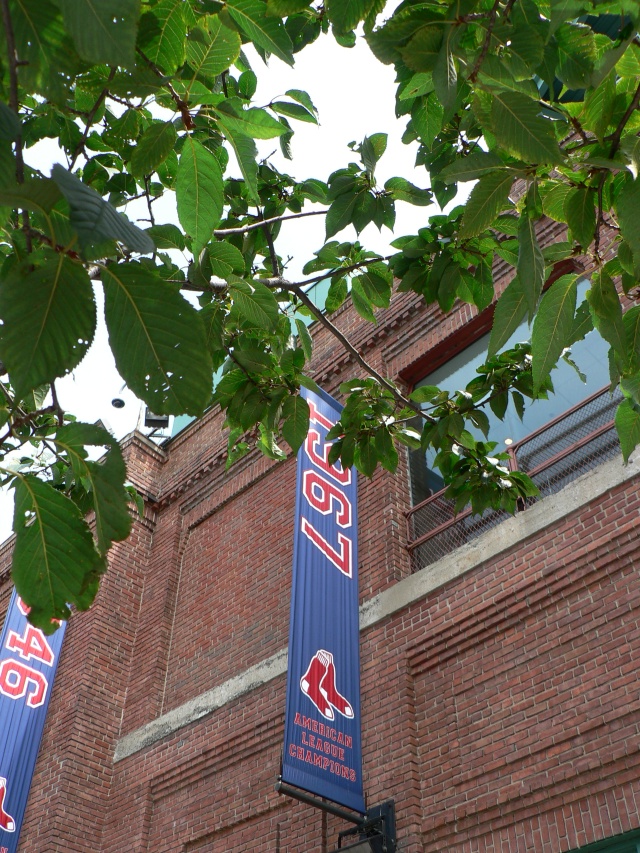 Hello and welcome, my name is Raymond Sinibaldi. An educator for more than two decades, a baseball fan for nearly 60 years, I have authored four books about baseball and her glorious history; with a fifth on the way in late spring of 2015; the first, The Babe in Red Stockings which was co-authored with Kerry Keene and David Hickey. It is a chronicle of Babe's days with the Red Sox. We also penned a screenplay about Babe's Red Sox days so if any of you are Hollywood inclined or would like to represent us in forwarding that effort feel free to contact me through my email. In 2012 we three amigos published Images of Fenway Park in honor of the 100th birthday of Fenway Park. That led to the creation of this blog. The following year, 2013 came my first solo venture, Spring Training in Bradenton and Sarasota. This is a pictorial history of spring training in those two Florida cities. The spring of 2014 brought forth the 1967 Red Sox, The Impossible Dream Season. The title speaks for itself and it also is a pictorial history. Many of the photos in this book were never published before. The spring of 2015 will bring 1975 Red Sox, American League Champions. Another pictorial effort, this will be about the Red Sox championship season of 1975 and the World Series that restored baseball in America. I was fortunate enough to consult with sculptor Franc Talarico on the “Jimmy Fund” statue of Ted Williams which stands outside both Fenway Park and Jet Blue Park Fenway South, in Fort Myers Florida. That story is contained in the near 300 posts which are contained herein. This blog has been dormant for awhile but 2015 will bring it back to life so jump on board, pass the word and feel free to contact me about anything you read or ideas you may have for a topic. Thanks for stopping by, poke around and enjoy. Autographed copies of all my books are available here, simply click on Raymond Sinibaldi and email me.
View all posts by fenwaypark100 →
This entry was posted in Fenway Park Baseball and tagged 2004 ALCS, 2004 World Series, Bloody Sock, Curt Schilling, Dutch Leonard, Ellis Burks, Fenway Park, Jim Rice, Joe Dobson, Joe Mooney, John I Taylor, Johnny Pesky, Marty Barrett, Red Sox, Red Sox Hall of Fame. Bookmark the permalink.