Roger the Dodger, oops, I mean Red Sox, no wait Blue Jay, noooooo, Yankee or is it Astro?…No it’s DODGER!!!!!

In a week which saw Johnny Pesky laid to rest, the Red Sox and their fans bid him adieu in a poignant Fenway Park moment, Roger Clemens made his way back on to the baseball stage. Talk about a study in contrasts.

Roger Clemens announces he will return to baseball and pitch with the Sugarland Skeeters an independent minor league team in the Atlantic League.

You remember him right? Well in case you’ve forgotten…..

It was almost 30 years ago today, when the Rocket taught the band to play…..

He’s been going in and out of style…..

But he’s guaranteed to raise a smile…. 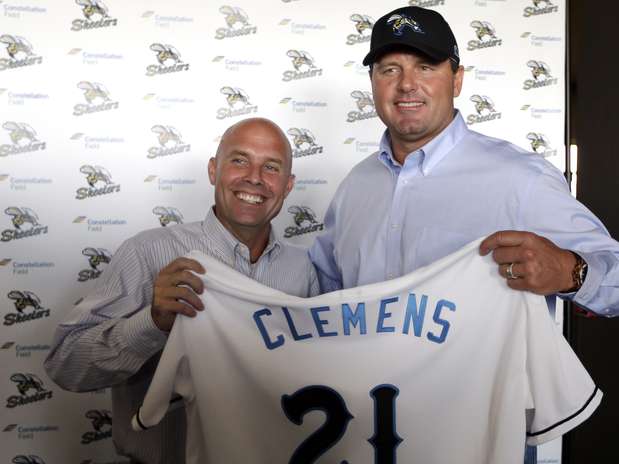 So let me introduce to you…..The One and Only…..

Well there is one thing that is motivating this step in the career of One and Only. One thing and one thing only!

In December, One and Onlys’ name will appear, for the first time, on the ballot for consideration for induction into the National Baseball Hall of Fame come next July. For purposes of clarification, this is how it works. First a player must play for a minimum of ten seasons in the major leagues. After he is retired for five seasons his name makes its first appearance on the Hall of Fame ballot. He will remain on that ballot for a maximum of 15 years, as long as he receives at least 5% of the vote. If he fails to make 5% of the vote, his name is removed from consideration; if 75% of the voting members of the BBWAA ( Baseball Writers Association of America) put an “X” next to a player’s name, he’s in!

Now here’s the deal, there are 45 names on the ballot which will be cast in December, 32 of which appear for the first time. Of those 32 first timers between 20-25 will not receive the 5% required for future consideration. However, this years first time ballot is historic because the following names appear, Barry Bonds, Sammy Sosa and of course the aforementioned One and Only. Each of these players have the numbers to be “first time inductees” which would have made the July 2013 induction one of the most historic of all time. However these three former players have another thing in common.

Their propensity to stick or have somebody else stick, needles in their tushy, loaded with things that will help them perform better has left an unagreeable taste in the mouths of the BBWAA and thus none of them will be inducted come next July. Oh they’ll stay on the ballot but this mess will just continue to linger as the BBWAA simply bides and buys time.

You may or may not be aware that ole One and Only retired from the Houston Astros.

One and Only won 354 games in the major leagues, (ninth all time), seven Cy Young Awards and on his numbers is a stone cold lock for Hall of Fame induction his first time on the ballot.

He is also under a personal services contract with those same Astros. The Astros just fired their manager and the owner said that something has to be done to get more tushys in the seats at Minute Maid Park. Hmmmmmm can you smell what ole One and Only and the Astros have cooking? I’m sure you can!

First, guess what happens if One and Only appears in one game this year, just one game? That’s right, his name comes off the Hall of Fame ballot and will not appear again until at least December of 2017! Time mends, things change and so will the attitude of the BBWAA as more and more new members become a part of this elite corps of baseball journalists. So time is and will be on the side of those players tainted with their brush with needles.

As you can imagine, One and Only was asked about this comeback in relation to his eligibility for the Hall of Fame and if it factored into his decision. One and Only was quick to respond, “not one bit”!

Although I did not see this first hand there are reports that this took place almost immediately after he uttered the phrase “not one bit”.

As all of this unfolded, two men came to my mind. The first was Dad. I remember watching one of One and Only’s first press conferences in Boston back in 1984. Dad said, “they (Red Sox) should never let this kid speak without somebody standing right next to him, he’s either a fraud or he’s not very smart, I’m not sure which”.

The next was the late Boston Globe columnist Will McDonough who had his own nickname for the kid from the Lone Star state…..

And the singer’s gonna sing a song, and he wants you all to sing along, so let me introduce to you, the One and Only…..

The flag at Fenway Park flys at half mast honoring Johnny Pesky.

Hello and welcome, my name is Raymond Sinibaldi. An educator for more than two decades, a baseball fan for nearly 60 years, I have authored four books about baseball and her glorious history; with a fifth on the way in late spring of 2015; the first, The Babe in Red Stockings which was co-authored with Kerry Keene and David Hickey. It is a chronicle of Babe's days with the Red Sox. We also penned a screenplay about Babe's Red Sox days so if any of you are Hollywood inclined or would like to represent us in forwarding that effort feel free to contact me through my email. In 2012 we three amigos published Images of Fenway Park in honor of the 100th birthday of Fenway Park. That led to the creation of this blog. The following year, 2013 came my first solo venture, Spring Training in Bradenton and Sarasota. This is a pictorial history of spring training in those two Florida cities. The spring of 2014 brought forth the 1967 Red Sox, The Impossible Dream Season. The title speaks for itself and it also is a pictorial history. Many of the photos in this book were never published before. The spring of 2015 will bring 1975 Red Sox, American League Champions. Another pictorial effort, this will be about the Red Sox championship season of 1975 and the World Series that restored baseball in America. I was fortunate enough to consult with sculptor Franc Talarico on the “Jimmy Fund” statue of Ted Williams which stands outside both Fenway Park and Jet Blue Park Fenway South, in Fort Myers Florida. That story is contained in the near 300 posts which are contained herein. This blog has been dormant for awhile but 2015 will bring it back to life so jump on board, pass the word and feel free to contact me about anything you read or ideas you may have for a topic. Thanks for stopping by, poke around and enjoy. Autographed copies of all my books are available here, simply click on Raymond Sinibaldi and email me.
View all posts by fenwaypark100 →
This entry was posted in Fenway Park Baseball and tagged Barry Bonds, Fenway Park, Johnny Pesky, National Baseball Hall of Fame, Red Sox, Roger Clemens, Roger Clemens Hall of Fame Ballot, Sammy Sosa, Steroids, Sugarland Skeeters. Bookmark the permalink.