The Dodger left fielder is chirping about how these days,

these days and left him longing for,

In an interview with CBSSports.com, Crawford had this to say about his, not so happy days in Boston, “That smile turned upside down quick….I think they want to see that in Boston. They love it when you’re miserable…Burying people in the media, they think that makes a person play better.” He wrapped it up in a nut shell when he said, “that media was the worst thing I’ve experienced in my life.”

In all fairness to him, there are real elements of truth in what he said. There are members of the Boston media who absolutely revel in negativity with talk show host John Dennis and Globe sportswriter Dan Shaughnessy coming to the top of my mind.

Last year WEEI morning host John Dennis was complaining after Josh Beckett pitched eight innings of five hit ball in a 12-2 win against David Price and the Rays. His complaint? He only had one strikeout.

As for Shaughnessy, I’m not sure he’s gotten over the Red Sox winning two World Series. After all they rendered the curse moot and pretty much put his book on the back burner. Don’t believe me? Check how many references he made to the Curse of the Bambino in his columns before 2004. Frankly, there are times when I wonder why any athlete in Boston would ever even talk to this guy or at least punch him in the mouth first. I don’t think he’s ever worn a jock strap.

That said, let’s get back to Crawford! First between the lines.

And he could field!

Living in the Tampa Bay Area I got a good look at Carl Crawford for a lot of years with the Rays. His athleticism is sick and he was a joy to watch on the baseball field. He four times led the league in stolen bases and triples and in fact he’s a triples machine leading all active players with 114 career three baggers, the rarest hit in baseball.

He was a great clubhouse guy, loved and appreciated by his teammates, he accommodated the Tampa Bay media and their fans and he was loved by one and all. And in 2008 when the Rays became a force in the American League, he stepped up his play; especially in the ALCS against the Red Sox, getting 10 hits, hitting .345 and knocking in four runs. He added two home runs in the World Series against the Phillies and established himself as one of the game’s elite players!

All of this set up his gargantuan payday which he garnered from Theo Epstein and the Red Sox. 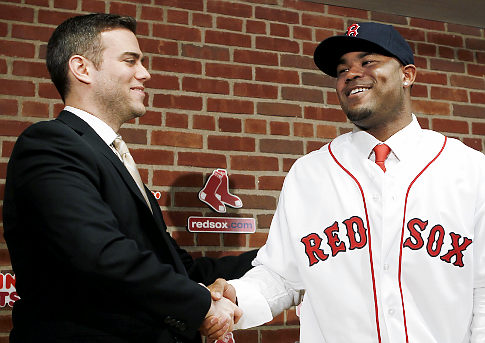 To say that he flopped in Boston would be an understatement of significant proportions. But just for the helluva it, let’s look at some numbers. In Tampa he played nine seasons average .296 with 35 stolen bases a year and 11 triples. Spending a good deal of his time in the leadoff spot, he averaged 66 RBI and 85 runs scored. He was a four-time all-star, won a Gold Glove and a Silver Slugger Award and was the MVP in the 2009 All Star game. Not really a power guy, he averaged 11 home runs a year and he played an average of 155 games a year!

All of this was good enough to earn him a contract worth 20 million of these per year for seven years from Tampa’s Eastern Division rival Red Sox.

Carl’s numbers in Boston were, shall we say, significantly diminished from his days as a Ray. He averaged .260, his triples fell to five a year and his stolen bases went from 35 to 12! He scored 88 runs during his entire Boston tenure and injuries plagued him to where he averaged 80 games a year.

I questioned his ability to deal with this,

Well he couldn’t! A fast start for him the first year was the key. Had he produced right away he would have been a darling but it was not to be. The reality is the guy simply couldn’t handle,

I have never met Carl Crawford, don’t know him, but I know folks who do and they say what a great guy he is. I don’t doubt that one bit. However in this instance he has fallen into the trap that has, unfortunately become America these days. When it all goes bad point the finger someplace else!

The reality is, from this perspective, he chased the dollars and who could blame him who among us would not. He did not go to the Red Sox blind. He knew Boston, he’d been a part of it from the third base dugout. He knew what he was getting himself into and when he

fell and landed on his head, he attacked. Too bad, I would have preferred something like this, ” I didn’t play well, I didn’t fulfill the expectations my previous play indicated but now I’m looking forward to getting myself healthy and showing the Dodgers I can still play”. I would have even liked something like, “Boston’s a tough town if you don’t deliver”. or how about, “I thought I knew what it was like but you really can’t until you live it.”

But wait, that would have involved taking some measure of personal responsibility! God forbid. Well for my money, if you don’t want to do that Carl then do me a favor will ya? Just shaaaaadup!

Hello and welcome, my name is Raymond Sinibaldi. An educator for more than two decades, a baseball fan for nearly 60 years, I have authored four books about baseball and her glorious history; with a fifth on the way in late spring of 2015; the first, The Babe in Red Stockings which was co-authored with Kerry Keene and David Hickey. It is a chronicle of Babe's days with the Red Sox. We also penned a screenplay about Babe's Red Sox days so if any of you are Hollywood inclined or would like to represent us in forwarding that effort feel free to contact me through my email. In 2012 we three amigos published Images of Fenway Park in honor of the 100th birthday of Fenway Park. That led to the creation of this blog. The following year, 2013 came my first solo venture, Spring Training in Bradenton and Sarasota. This is a pictorial history of spring training in those two Florida cities. The spring of 2014 brought forth the 1967 Red Sox, The Impossible Dream Season. The title speaks for itself and it also is a pictorial history. Many of the photos in this book were never published before. The spring of 2015 will bring 1975 Red Sox, American League Champions. Another pictorial effort, this will be about the Red Sox championship season of 1975 and the World Series that restored baseball in America. I was fortunate enough to consult with sculptor Franc Talarico on the “Jimmy Fund” statue of Ted Williams which stands outside both Fenway Park and Jet Blue Park Fenway South, in Fort Myers Florida. That story is contained in the near 300 posts which are contained herein. This blog has been dormant for awhile but 2015 will bring it back to life so jump on board, pass the word and feel free to contact me about anything you read or ideas you may have for a topic. Thanks for stopping by, poke around and enjoy. Autographed copies of all my books are available here, simply click on Raymond Sinibaldi and email me.
View all posts by fenwaypark100 →
This entry was posted in Fenway Park Baseball, Fenway Park Other and tagged baseball, Boston Media, Boston Red Sox, Carl Crawford, cbssports, Dan Shaughnessy, Fenway Park, Free Agent, John Dennis, Tampa Bay Rays, Theo Epstein. Bookmark the permalink.

2 Responses to Just Shaaaaadup Will Ya…..