“There Comes a Time When All the Cosmic Tumblers Click and the Universe Opens Up To Show You What’s Possible”…..Terrance Mann

It was an unusual day in Boston 46 years ago today. A chilly day in early spring in which the low temperature was 45 and although the thermometer would not get past the 52 degree mark, a brief thunderstorm appeared.

There were 18,041 patrons who made their way to Fenway Park on this Sunday afternoon, to watch the four and four Red Sox take on the New York Yankees. It was the ninth game of the young season and it was the sixth time the Sox and Yankees squared off against each other.

Darrell “Bucky” Brandon was on the mound for the Sox while knuckleballer and soon to be best-selling author Jim Bouton got the call for the New Yorkers.

Bouton  violated the sanctity of the clubhouse with the first ever “tell all” book about the inner workings of a pro baseball team. Revealed in his 1970 book, among other things was  Mickey Mantle’s propensity to consume large amounts of alcohol on a consistent basis; a well-known fact within baseball’s inner circle which had protected Mickey throughout his career. The book led to Bouton being blackballed from baseball.

The day before, the Red Sox had come from behind to take a 5-4 win sparked by a three run fifth which saw Carl Yastrzemski single with the bases loaded to plate two runs and then steal second base. Yaz had homered in the first inning, his first of the season. 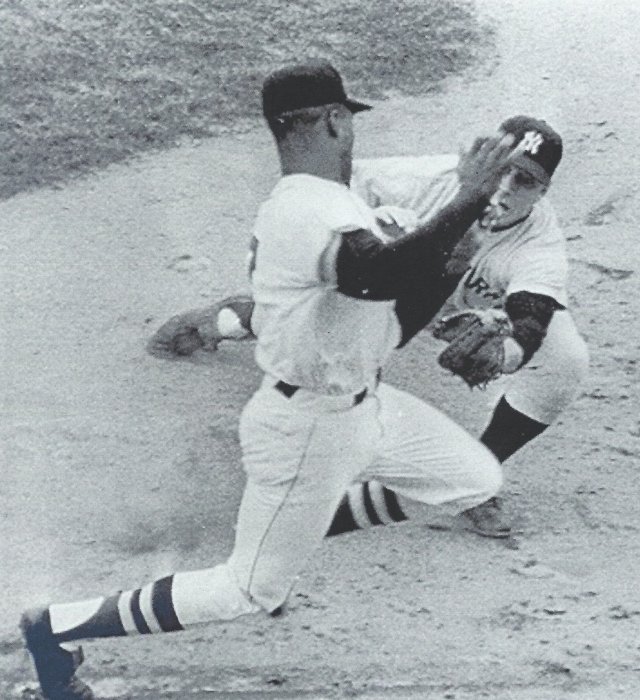 The aged Mickey Mantle made a great play at first on Reggie Smith tagging him out on the first Sox play of the game.

It was Yaz who got em going on this day when he staked the home town team to a 2-0 lead with his second, first inning homer in as many days.

A George Thomas single, scored first baseman Tony Horton and after the first inning the Sox had a 3-0 lead. Bouton did not get out of the second inning and an RBI single by Mantle in the third made the score 3-1.

Russ Gibson countered with a clutch two out, two run double in the bottom of the third giving Brandon and the Red Sox a comfortable 5-1 lead.

Brandon could not get out of the fifth.

It all unraveled in the fifth inning and the chief “unraveler” was veteran Yankee catcher and 1963 MVP Elston Howard. For on this day he would complete his own personal troika of dagger wounds inflicted on the Red Sox in their young 1967 season.

His first had come on the aforementioned debut of Gibson and Rohr at Yankee Stadium; for it was Howard who had singled with two outs in the bottom of the ninth spoiling Rohr’s no-hitter. The second came exactly a week later at Fenway Park when Howard again singled, this time in the eighth inning knocking in the only Yankee run of the day and ruining Rohr’s bid for his second shutout in as many big league starts. On this day he was called upon to pinch hit for shortstop John Kennedy. There were two outs, two on in the top of the fifth and the Yankees were trailing 5-4. Howard delivered with a double giving the Yanks a lead they would never relinquish on their way to a 7-5 win.

Howard would turn things around in August when he donned a Red Sox uniform and played a crucial role on their march to their Impossible Dream pennant. 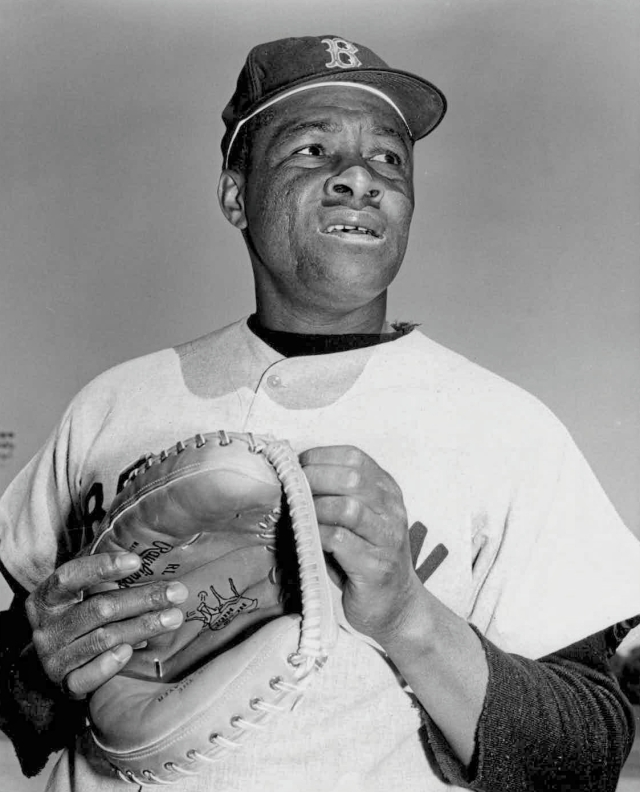 The Red Sox acquired Howard on August 4, 1967. A key acquisition for the stretch drive. As Red Sox announcer Ken Coleman stated, “the man who had broken our hearts in April, made them soar in September.”

In the Red Sox half of the fifth, Carl Yastrzemski was in the box. He took a called strike which Manager Dick Williams didn’t particularly agree with and the young Skipper let plate ump Red Flaherty know about it. In fact he let him know about it so vociferously  that Flaherty decided to give Williams the rest of the day off. When Flaherty called a second strike on Yaz that he did not particularly agree with, he too found his way to the clubhouse courtesy of the home plate umpire. There were the first ejections of the 1967 season and only Yaz’s second in his then seven-year career.

Those who play and understand this great game know that there are good losses and bad losses. On the surface this one looks like a bad loss. A 5-1 lead blown, the manager and star ejected for losing their cool after the lead melted away. However, how much of this game, indeed life, plays out beneath the surface? On this day this team showed a fire that had been absent from the Back Bay for a long, long time.

The day began with the oddity of thunder clouds in the midst of only 50 degree weather, the cosmic tumblers of the universe clicking in to show what’s possible? Signaling the arrival of an energy force never before seen in the city?

Are the cosmic tumblers which set that energy force in motion so long ago clicking once again? Opening up to show the possibilities?

The cosmos clicks, and will reveal itself to those who dare, those who believe, those who open themselves to it. So on this April 23rd I look to the heavens, I look to Fenway…..For I’ve seen the miracle and I know what’s possible…..

Hello and welcome, my name is Raymond Sinibaldi. An educator for more than two decades, a baseball fan for nearly 60 years, I have authored four books about baseball and her glorious history; with a fifth on the way in late spring of 2015; the first, The Babe in Red Stockings which was co-authored with Kerry Keene and David Hickey. It is a chronicle of Babe's days with the Red Sox. We also penned a screenplay about Babe's Red Sox days so if any of you are Hollywood inclined or would like to represent us in forwarding that effort feel free to contact me through my email. In 2012 we three amigos published Images of Fenway Park in honor of the 100th birthday of Fenway Park. That led to the creation of this blog. The following year, 2013 came my first solo venture, Spring Training in Bradenton and Sarasota. This is a pictorial history of spring training in those two Florida cities. The spring of 2014 brought forth the 1967 Red Sox, The Impossible Dream Season. The title speaks for itself and it also is a pictorial history. Many of the photos in this book were never published before. The spring of 2015 will bring 1975 Red Sox, American League Champions. Another pictorial effort, this will be about the Red Sox championship season of 1975 and the World Series that restored baseball in America. I was fortunate enough to consult with sculptor Franc Talarico on the “Jimmy Fund” statue of Ted Williams which stands outside both Fenway Park and Jet Blue Park Fenway South, in Fort Myers Florida. That story is contained in the near 300 posts which are contained herein. This blog has been dormant for awhile but 2015 will bring it back to life so jump on board, pass the word and feel free to contact me about anything you read or ideas you may have for a topic. Thanks for stopping by, poke around and enjoy. Autographed copies of all my books are available here, simply click on Raymond Sinibaldi and email me.
View all posts by fenwaypark100 →
This entry was posted in Fenway Park Baseball and tagged Ball Four, Billy Rohr, Bucky Brandon, Carl Yastrzemski, Dick Williams, Elston Howard, Jim Bouton, Mickey Mantle, Russ Gibson, Terrance Mann, The Impossible Dream, Yaz. Bookmark the permalink.

2 Responses to “There Comes a Time When All the Cosmic Tumblers Click and the Universe Opens Up To Show You What’s Possible”…..Terrance Mann