The Anatomy of a Rivalry, The Sixth Stanza….It Comes to Fruition…..REVISITED

The Anatomy of a Rivalry, The Sixth Stanza….It Comes to Fruition…..

Well we’ve been through a few stanzas of the Red Sox/Yankee rivalry song. The last verse was the Joe D/Teddy Ballgame wonder of the summer of ’41’. Therein the stage was set for the rivalry that would blossom at the end of that decade.

On Tuesday April 23, 1946, the Red Sox lost an 11 inning game to Washington which dropped their record to 6-2 and in a tie for first place. The next day they were beaten by the Yankees and dropped into second place by a full game.

They would not lose again until May 11th and after 15 straight wins (a team record) they held a 4 1/2 game lead which would be their smallest lead for the remainder of the season. They ran away with their first pennant in 28 years finishing 12 games ahead of the Tigers and 17 games ahead of the third place Yankees.

Joe Cronin, in his 12th season as Red Sox manager finally led them to the promised land in 1946. They dropped the World series to the Cardinals in seven games.

The 1947 season found a return to bridesmaid status for the Fenway Park nine. They were actually in first place on the 19th of June but at the end of the month they dropped six in a row and eight of 10 falling to eight games back and they were out of the race eventually finishing in third, 14 games behind, guess who? Oh, and the Guess Whos beat the Dodgers in the World Series. 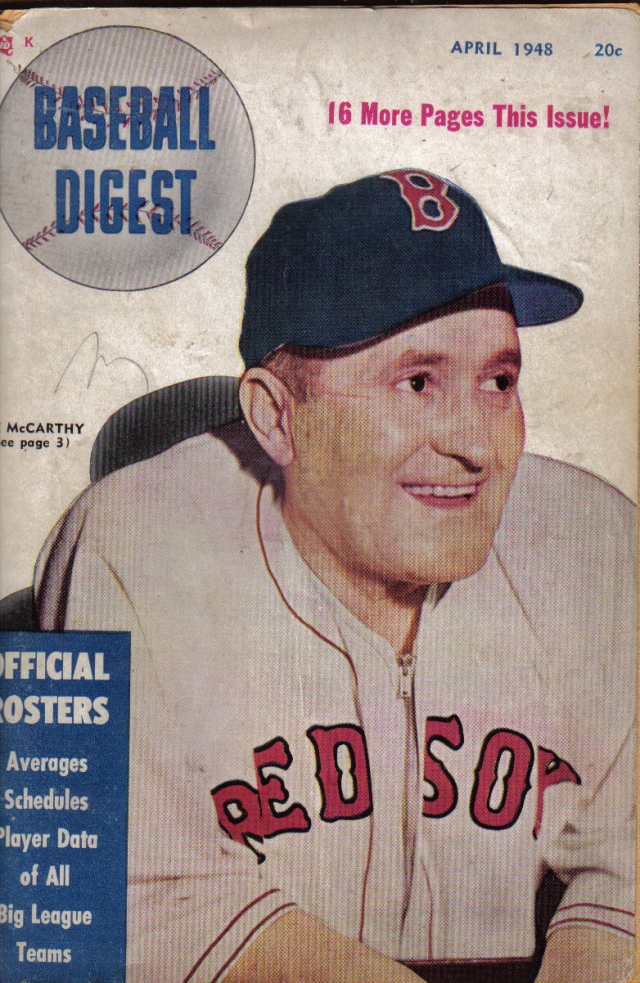 Joe McCarthy managed the Yankees from 1931-1946 and was at the helm for seven World Series Championships.

The 1948 season ended with the Red Sox losing a one game playoff to the Cleveland Indians at Fenway Park. However, it is within that season that the birth of a true rivalry between the Red Sox and the Yankees took place.

Perhaps their new manager had something to do with it as the Red Sox hired former Yankee manager Joe McCarthy. Perhaps Mr. Yawkey was looking for a little of that World Series magic to rub off on his boys. The magic did not appear in spring for sure as the Red Sox stumbled out of the gate with five losses in their first six games and then embarked on a journey of streaks! Win four, lose five, win four, lose three and then they dropped 12 of 15 games to end the month of May 11 1/2 games out of first!  McCarthy righted the ship and a 13 game winning streak, begun in mid-July, had the Red Sox in first place by the end of that month and from then on it was a three team race between the Red Sox, Indians and the Yankees.

The Last weekend of the season arrived and on Saturday morning October 2nd, the standings had the Cleveland Indians in first place with a record of 95-57, the Red Sox and Yankees were tied for second, a game back at 94-58. The Yankees were at Fenway, the Tigers were in Cleveland.

In Cleveland the Indians beat the Tigers clinching a first place tie. In Boston, Ted Williams hit a two run first inning homer sparking the Red Sox to a 5-1 win eliminating the Yankees and keeping their hopes alive for a tie.

Playing the unusual position of spoiler, the Yankees battled the Sox in that final game however, the Red Sox overwhelmed them with a 15 hit attack in a 10-5 win. The Tigers helped the cause with a 7-1 win over the Indians who were now on their way to Fenway for a one game winner take all match. 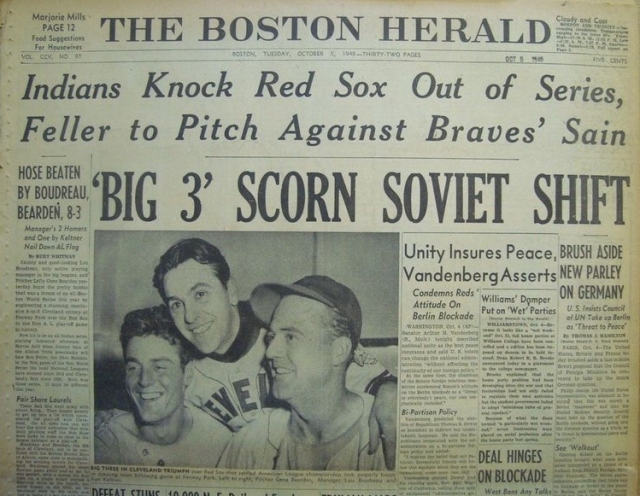 To tears as the Indians wrestled the pennant away from Red Sox pitcher Denny Galehouse, 8-3. Making them bridesmaids, once again!

However, in the first true head to head matchup for a pennant against the Yankees, since the inception of the American League, the Red Sox had prevailed, it was little consolation. However, the Fenway Faithful couldn’t, “Wait till next year”! A cry they would come to embrace more than they ever wanted to.

The season of 1949 was part of what I have come to call the “Litany of Futility” which was imparted to me by my dad. He talked of the 1948 playoff game but nothing hurt as much as 1949.

The season was almost a carbon copy of 1948, start slow, streaky, 12 games out in July and a strong August/ September surge got them back in the hunt. Three straight wins against the Yankees had them a one game lead in first place with five games to go. They beat the Senators two of three and then headed to Yankee Stadium for the final two games of the season. The Red Sox needed one win and they would be World Series bound!

On Saturday October 1st, the Sox jumped to a 4-0 lead after three but the Yanks tied it with two in the fourth and two in fifth. It remained that way until the bottom of the eighth, when up stepped the immortal John Lindell. Who? That’s what I said as Dad related the story, “I never heard of him… he’s a journeyman nobody who killed us”. Oh, I thought, not quite sure what that meant at the time.

John Lindell, made the Yankee team in the early forties. He was relatively successful as a  war replacement player but by the end of the decade he was a backup outfielder and in ’49’ he played in 78 games, none bigger than the next to last game of the season.

With one out in the eighth, he deposited a Joe Dobson pitch into the seats giving New York a 5-4 win and life.

Vic Raschi squared off. The Yankees scored a run in the first and that was all the scoring until the Yankees added four in the bottom of the eighth. The Sox did not go quietly as they came back with three in the top of the ninth but it was too little, too late and they once again wore the bridemaids slippers to the post season dance! And added another link in what was fast becoming a chain of futility. But not to worry, for the Fenway Faithful knew they were on the verge of cracking them, they were right there, a new decade awaited and they couldn’t “wait till next year”!

And so it was at this time in Fenway Park history, the late 40s, the “Birth of a Rivalry” time.

Hello and welcome, my name is Raymond Sinibaldi. An educator for more than two decades, a baseball fan for nearly 60 years, I have authored four books about baseball and her glorious history; with a fifth on the way in late spring of 2015; the first, The Babe in Red Stockings which was co-authored with Kerry Keene and David Hickey. It is a chronicle of Babe's days with the Red Sox. We also penned a screenplay about Babe's Red Sox days so if any of you are Hollywood inclined or would like to represent us in forwarding that effort feel free to contact me through my email. In 2012 we three amigos published Images of Fenway Park in honor of the 100th birthday of Fenway Park. That led to the creation of this blog. The following year, 2013 came my first solo venture, Spring Training in Bradenton and Sarasota. This is a pictorial history of spring training in those two Florida cities. The spring of 2014 brought forth the 1967 Red Sox, The Impossible Dream Season. The title speaks for itself and it also is a pictorial history. Many of the photos in this book were never published before. The spring of 2015 will bring 1975 Red Sox, American League Champions. Another pictorial effort, this will be about the Red Sox championship season of 1975 and the World Series that restored baseball in America. I was fortunate enough to consult with sculptor Franc Talarico on the “Jimmy Fund” statue of Ted Williams which stands outside both Fenway Park and Jet Blue Park Fenway South, in Fort Myers Florida. That story is contained in the near 300 posts which are contained herein. This blog has been dormant for awhile but 2015 will bring it back to life so jump on board, pass the word and feel free to contact me about anything you read or ideas you may have for a topic. Thanks for stopping by, poke around and enjoy. Autographed copies of all my books are available here, simply click on Raymond Sinibaldi and email me.
View all posts by fenwaypark100 →
This entry was posted in Fenway Park Baseball and tagged 1948 playoff game, 1949, Dom DiMaggio, Ellis Kinder, Fenway Park, Joe Cronin, Joe McCarthy, Johnny Lindell, Johnny Pesky, Red Sox, Red Sox/Yankee Rivalry, Ted Williams, Vic Raschi. Bookmark the permalink.