Yesterday’s 533 mile ride on the road less traveled brought us down Interstate 26 west through a beautiful mountain drive through here.

In all of my sojourns north and south, I had never driven this road and although it was cloudy with showers, there is something quite inspiring in watching the clouds spoon with mountain tops right outside your window.

Caught a glimpse of this fair city on a drive through. I had never seen it. Planned to once but life intervened and you know how that works.

We arrived in Baltimore and made our way to Oriole Park at Camden Yards. 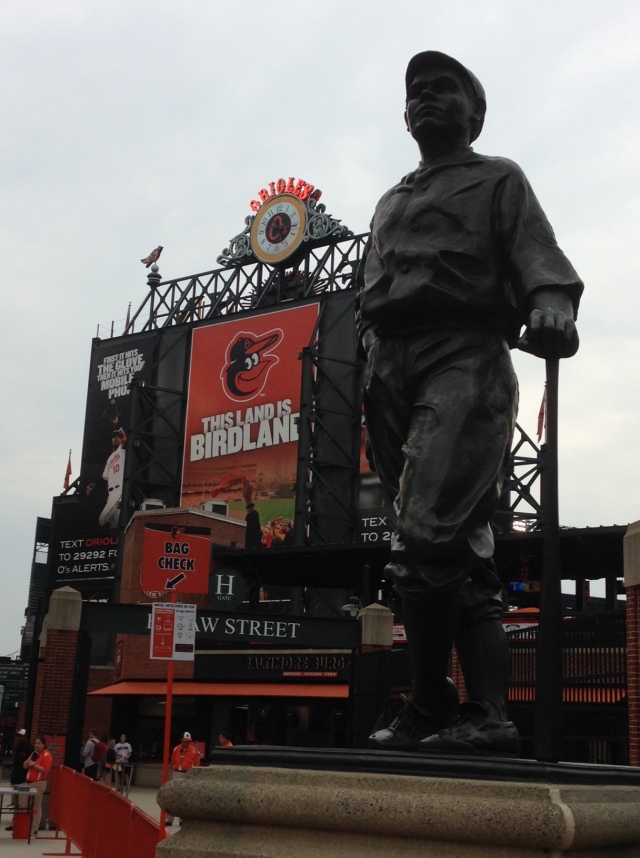 George Herman Ruth greets you at the main gate. George was a Baltimorean and in fact his Dad’s saloon was once located approximately where centerfield is located today. His first pro team was th minor league Baltimore Orioles from were he was purchased by the Boston Red Sox.

Josh fell in love with the place and who wouldn’t? 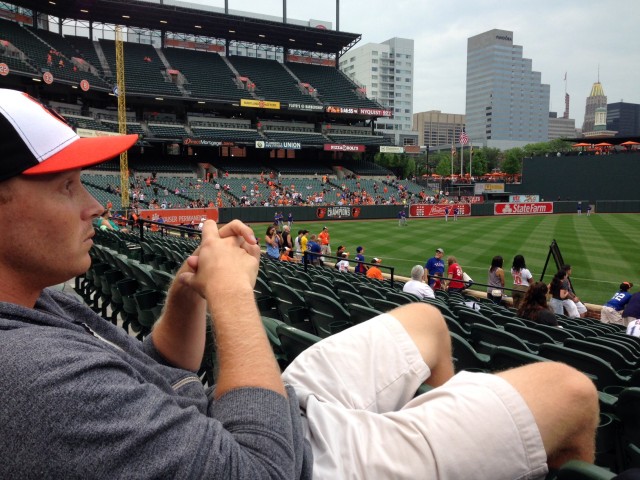 Josh taking in the park and the Rangers taking BP. 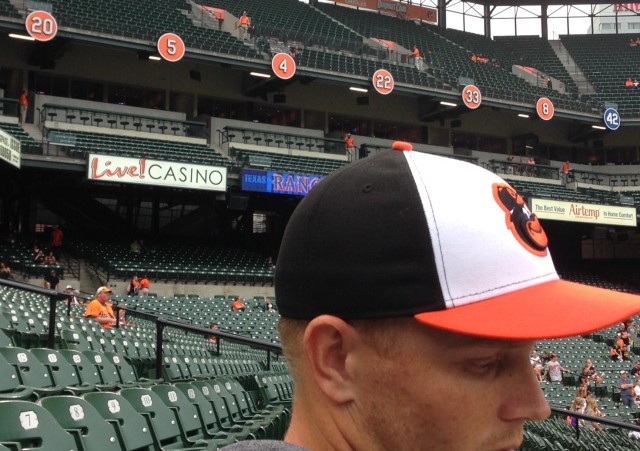 The Orioles retired numbers looking down on Josh, sporting his new Bird’s cap.

The Orioles retired numbers are Hall of Famers, Frank Robinson #20, Brooks Robinson #5, Earl Weaver #4, Jim Palmer #22, Eddie Murray #33 and Cal Ripken #8. And of course Jackie #42. Their spots on the façade indicate the order in which they were retired.

I attempted to coerce him to getting his picture snapped with the Oriole’s mascot but he wouldn’t bite.

He did however pose with one of Dad’s all time favorite players. 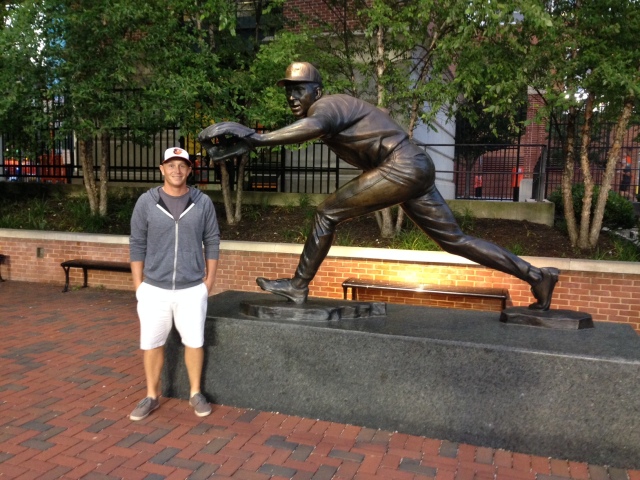 We saw a very well pitched game which is baseball at it’s best and I learned a little technology as well. Josh taught me how to take a panoramic picture with my phone. Yikes! Who knew? I thought you needed a panoramic lens for that kind of stuff.

The “panoramic view” from our seats.

The “panoramic view” from right field.

It was wonderful to watch my boy, whose passion and love for the game oozes from him, enjoy one of the games great venues. It was the bottom of the seventh and we were at the end of a looooong day. It was nothing to nothing oops, excuse me Fran, zero to zero. Josh looked at me and said “Do you want to go?’ I said “Are you sure?” “Dad we didn’t come here to see who won.”

So we strolled the half mile back to the hotel and couldn’t find the game on TV. As I was drifting off Josh said, Texas scored in the top of the ninth and as I write this in Friday’s pre dawn, I don’t know who won.

What I do know is that the game of baseball has a sweet perfection to it that is best played out in a contest in which few runs are scored. We saw no runs scored and in that sweet perfection I found serenity. Baseball has always brought to me serenity even through life’s most trying times. And last night she did it again!

In a few moments it will be off to Boston and if I may paraphrase Paul Simon, to “New England, where my heart lies.”

Tonight at midnight, I will join my good friend Jordan Rich on WBZ Radio 1030. 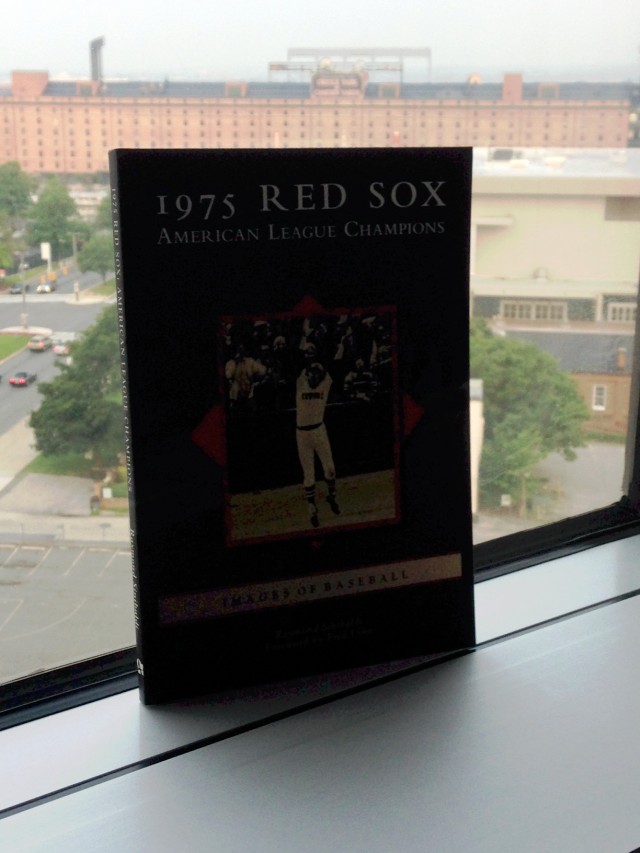 Sooooo, if you are having trouble sleeping or if you’ve just come in from a night out or if you just want to hear some reminiscings about that great year, tune here, hear and give us a call.

And if you happen to be in a lovely little hamlet in upstate New York on July 15th. Stop by and say hello.

Hello and welcome, my name is Raymond Sinibaldi. An educator for more than two decades, a baseball fan for nearly 60 years, I have authored four books about baseball and her glorious history; with a fifth on the way in late spring of 2015; the first, The Babe in Red Stockings which was co-authored with Kerry Keene and David Hickey. It is a chronicle of Babe's days with the Red Sox. We also penned a screenplay about Babe's Red Sox days so if any of you are Hollywood inclined or would like to represent us in forwarding that effort feel free to contact me through my email. In 2012 we three amigos published Images of Fenway Park in honor of the 100th birthday of Fenway Park. That led to the creation of this blog. The following year, 2013 came my first solo venture, Spring Training in Bradenton and Sarasota. This is a pictorial history of spring training in those two Florida cities. The spring of 2014 brought forth the 1967 Red Sox, The Impossible Dream Season. The title speaks for itself and it also is a pictorial history. Many of the photos in this book were never published before. The spring of 2015 will bring 1975 Red Sox, American League Champions. Another pictorial effort, this will be about the Red Sox championship season of 1975 and the World Series that restored baseball in America. I was fortunate enough to consult with sculptor Franc Talarico on the “Jimmy Fund” statue of Ted Williams which stands outside both Fenway Park and Jet Blue Park Fenway South, in Fort Myers Florida. That story is contained in the near 300 posts which are contained herein. This blog has been dormant for awhile but 2015 will bring it back to life so jump on board, pass the word and feel free to contact me about anything you read or ideas you may have for a topic. Thanks for stopping by, poke around and enjoy. Autographed copies of all my books are available here, simply click on Raymond Sinibaldi and email me.
View all posts by fenwaypark100 →
This entry was posted in Fenway Park Baseball, Fenway Park Other and tagged 1975 American League Champions, Ashville North Carolina, Brooks Robinson, Cal Ripken, Cherokee National Forest, Earl Weaver, Eddie Murray, Frank Robinson, Jim Palmer, Jordan Rich, Oriole Park at Camden Yards, Road Trip. Bookmark the permalink.