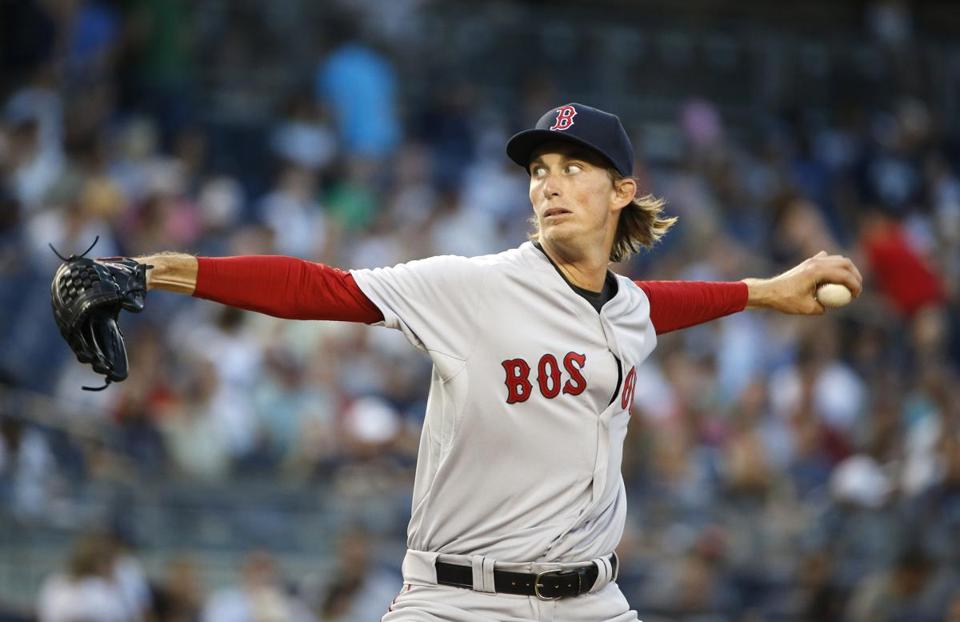 He finally arrived last night making his debut in Yankee Stadium and overall it was a fairly impressive beginning for the 6’6″ southpaw. Physically sporting a tad of resemblance to Randy Johnson (mullet noted); the kid overcame a tough first inning; showed flashes of brilliance and ultimately took the loss.

Obviously a bit over amped in the first inning, Owens had trouble finding the plate and threw 34 pitches. After striking out Jacoby Ellsbury (remember him?), a single, a walk and a single put him behind 1-0. A visit from pitching coach Carl Willis was followed by a Brian McCann line out to center and a Carlos Beltran pop foul and the kid had his first big league inning under his belt.

Chase Headley led off the second with a single following which Owens became a big leaguer. The next 12 Yankees went down and in the fifth his mates grabbed two runs to give him the lead.

He threw 34 pitches in the first, 17 in the second and then threw a combined total of 37 in the third, fourth and fifth.

Jackie Bradley Jr. had a great at bat in the fifth, battling back from a 0-2 count to get to 3-2 and hitting a sacrifice fly giving Owens and the Sox a 2-1 lead in the fifth.

Coming out for the sixth, Owens faltered hanging a slider to Chris Young who lined a single to left and then leaving a pitch up to Alex Rodriquez who doubled putting men on second and third. By the way, a great defensive play by Bradley kept Young from scoring.

Sox manager John Farrell comes with the hook for Owens in the sixth.

So Henry Owens’ long awaited arrival came and went last night in Yankee Stadium. His line, not really all that impressive; 5 innings pitched, 3 earned runs, 5 hits, a walk and 5 strikeouts. His ERA this morning is 5.40.

Within that line however was 12 straight Yankees going down and going down in an impressive manner on a mixture of Owens’ arsenal of fastball, curve, slider and change.

Conversely, I’m tired of a few things as well.

I am tired of David Ortiz never running beyond a home run trot. Has he not figured out that it only works when you hit a home run? Not on a ground ball to the right side. Oh and did you notice last night? He was doubled off of first base on a line drive, back to the pitcher and the best part; he was NOT BEING HELD ON!!!! Yikes.

I am tired of the fragility that is Clay Buchholz.

I am tired of the performance, or lack there of, of the bullpen. And for that matter what do you think of the idea put forth in the spring that all the starters could be aces? Really?

The Red Sox are 47-60 on pace to equal last years stellar record of 71-91. That will mean for three of the last four years they will have cracked the 90+ loss barrier. Do you know how far back you have to go to the last time that happened? All the way back to 1964, ’65’ and ’66’! That’s right, the days of :Arnold Early , Ed Connolly, Dick Stuart, Lou Clinton, Jim Gosger, Bob Duliba, Don Demeter, Dick Stigman and Pete Magrini. The days when Mike Higgins sat in the GM’s chair and Billy Herman skippered on the field.

Not that anyone has asked but this is what I want to see the rest of the summer. Put Johnson and Owens in the rotation with Rodriquez. Keep Wright there and of course Porcello. Maybe he’ll find some semblance of himself.

Take Joe Kelly and say, “look kid, let’s try you in the bullpen.” See if he can be turned into a one inning guy! I don’t care which inning but good Lord it seems worth the effort. Maybe just having to focus it all to get three outs could be helpful to the kid! Maybe try the same with Masterson. Could it be worse?

Could Joe Kelly be a future closer? Worth a try!!!

I want Jackie Bradley Jr. to get the rest of the year as the centerfielder. I want to see if in fact he can become a .250-.270 big league hitter! The fact is that they set him back by rushing him to fill Ellsbury’s slot; he’s worked his kiesta off to get back and I think they owe him a shot, a real shot! What’s to lose? 92 games? When Mookie comes back put him at second!

I’m not a big, big fan of Castillo but he’s paid so let’s see what he can do. Truth is, I’ve seen high school hitters with a better approach than him.

I’d also like to see Hanley play some first base. Oh, but he doesn’t want to. UGH!!!!

And I would love to see, love to see David Ortiz RUN!!!!!! Play the game the way it should be played David! You’re better than that!

That’s all for now….. But please, please, please….Give us a glimpse of the future!!! PLEASE!!! The present is just too damned ugly!

Hello and welcome, my name is Raymond Sinibaldi. An educator for more than two decades, a baseball fan for nearly 60 years, I have authored four books about baseball and her glorious history; with a fifth on the way in late spring of 2015; the first, The Babe in Red Stockings which was co-authored with Kerry Keene and David Hickey. It is a chronicle of Babe's days with the Red Sox. We also penned a screenplay about Babe's Red Sox days so if any of you are Hollywood inclined or would like to represent us in forwarding that effort feel free to contact me through my email. In 2012 we three amigos published Images of Fenway Park in honor of the 100th birthday of Fenway Park. That led to the creation of this blog. The following year, 2013 came my first solo venture, Spring Training in Bradenton and Sarasota. This is a pictorial history of spring training in those two Florida cities. The spring of 2014 brought forth the 1967 Red Sox, The Impossible Dream Season. The title speaks for itself and it also is a pictorial history. Many of the photos in this book were never published before. The spring of 2015 will bring 1975 Red Sox, American League Champions. Another pictorial effort, this will be about the Red Sox championship season of 1975 and the World Series that restored baseball in America. I was fortunate enough to consult with sculptor Franc Talarico on the “Jimmy Fund” statue of Ted Williams which stands outside both Fenway Park and Jet Blue Park Fenway South, in Fort Myers Florida. That story is contained in the near 300 posts which are contained herein. This blog has been dormant for awhile but 2015 will bring it back to life so jump on board, pass the word and feel free to contact me about anything you read or ideas you may have for a topic. Thanks for stopping by, poke around and enjoy. Autographed copies of all my books are available here, simply click on Raymond Sinibaldi and email me.
View all posts by fenwaypark100 →
This entry was posted in Fenway, Fenway Park Baseball and tagged Brian Johnson, Clay Buchholz, David Ortiz, Eduardo Rodriquez, Hanley Ramirez, Henry Owens, Jackie Bradley JR., Joe Kelly, Rick Porcello, Yankee Stadium. Bookmark the permalink.