“This field, this game: it’s a part of our past, Ray. It reminds us of all that once was good and it could be again.” Terrence Mann

I have been a teacher for a quarter century now and I have often said that one of the most rewarding aspects of teaching is that it encompasses the past, the present and the future. I interact with kids every day and each day is spent cultivating those relationships. Drawing on past experience in every walk of my life, I work daily with kids who are navigating their way through the daily, often turbulent, waters of childhood and adolescence. And in so doing, hopefully, in some way, I help to prepare them for the future, their future and in a small way the future of this nation.

I am a passionate historian! This blog was born on the 100th birthday of Fenway Park. There have been some in my life who have suggested I spend too much time in the past. I suppose that is a matter of personal opinion, however this I know, that often the past can be paralyzing. Events, decisions and experiences which remain unresolved will influence us, our choices, our behavior and our self worth.

There are times in life when the patchwork quilts of past and present meet. Times when an event, an experience revisit us. There is nowhere where this is more prevalent than in the game of baseball and it is within that greatest of games where often events of my past have been brought home to me.

The Collegiate tour is a product of the Florida Burn; (http://www.floridaburn.com/burn-store.html) a travel ball organization in Florida founded and run by these two guys,

It is a tour that is filled with great moments as a group of high school baseball players who aspire to take their game to the next level. These young men get an incredible opportunity to see 25 or more colleges and get to hear first hand the rigors of that endeavor.

Some of the moments…

First day, stop, two was at the University of Florida in Gainesville where two former Collegiate Diamond Tour participants play a big role in the Gators success.

Coach Faulkner “interviews” Gator shortstop Dalton Guthrie who gives the boys an idea of what it takes to compete in college.

At the University of North Carolina in Chapel Hill, we ran into two other former Diamond Tour participants. Austin Bergner (L) and Brandon Elmy are introduced to the boys at UNC. Elmy is entering his junior year at Furman University in South Carolina and Bergner is entering his freshman year at UNC. Austin was drafted in June by the Red Sox.

Duke University is always a favorite stop with the visit to the legendary Cameron Indoor Stadium a highlight and it provides a surprising link to baseball.

Dick Groat’s number 10 was the first Blue Devil basketball number retired in 1952. He was the third overall pick in the draft by the Fort Wayne (Detroit) Pistons and he played with them a year. An All-American baseball and basketball player at Duke, Groat was a five time all star, the 1960 MVP for the World Champion Pirates and the 1960 NL Batting Champ. Groat played 14 years in the big leagues and won a ring with the Cardinals in 1964 as well.

A stop was made to pay respects to “Shoeless” Joe Jackson in Greenville South Carolina. The baseball sitting atop the O in Jackson, was signed by all the boys on the tour.

Charleston Southern University head coach Adam Ward, (second from left) addresses the boys at the school’s baseball field. It was here where real life intersected with the great game of baseball.

The most poignant moments of the trip came when we visited the campus of Charleston Southern University.  It was Fathers Day, two days from the day when one year ago, an evil monster attended a bible study at the Emanuel African Methodist Episcopal Church. An hour into the session, he rose and opened fire into the class killing nine of them. One of them was Sharonda Coleman-Singleton, the mother of Charleston Southern’s right fielder, Chris Singleton.

Chris Singleton held a press conference on the Charleston Buccaneer baseball field. And in it he set the tone for how the community chose to respond to hate. An invaluable lesson for the boys on the tour, for the men on the tour…For the nation.

The visit to Eastern Carolina provided an intersection of lives all brought about by three decades of baseball.

Tyler’s dad Bob played against Coach Faulkner in the minor leagues. They faced each other in the NY Penn League in 1987, the Carolina League in 1988 and both the Eastern and International Leagues in 1989.

On September 7, 1991, Bob Zupcic made his big league debut when he pinch ran for Mo Vaughn. He would bat 25 times that month and he launched his first home run into Fenway’s old left field screen as well. His official rookie season would take place the following year.

This is where I step in.

It was Tuesday night June 30, 1992 and I made my way into Fenway Park to watch the Sox take on the Tigers. My daughter Beth was with me, she was eight years old. The Sox lineup that night included Jody Reed, Jack Clark, Phil Plantier, Luis Rivera, Tom Brunansky, Mo Vaughn, Tony Pena, Wade Boggs, who was coming to an end of his time in Boston and in centerfield the rookie, Bob Zupcic.

After two innings the Tigers led 5-3. It would stay that way until the Red Sox added one in the eighth narrowing the lead to 5-4 going to the ninth. With men on second and third with one out, Tiger manager Sparky Anderson, ordered a walk to Jody Reed, loading the bases and bringing up Bob Zupcic. On a 3-1 pitch the kid launched a fast ball over the screen at Fenway sending the Faithful into delirium. 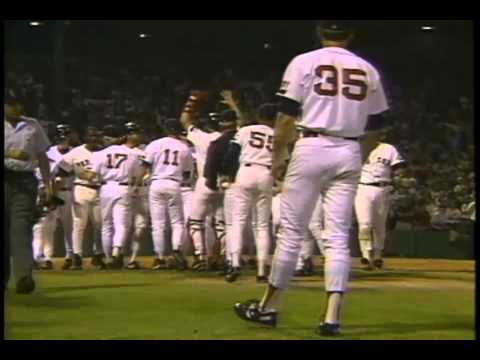 The next day I took the troops to one of our favorite places. The baseball card store in South Weymouth Mass. We loaded up on Bob Zupcic rookie cards.

The baseball thread of decades past wove its way through the campus of Eastern Carolina University last week.  I related this story to Tyler which brought a smile. “My dad will be happy to hear that story” he told me and he was pleased to learn from Coach Faulkner that “your dad was one of the nicest men I met in all my years playing.”

Tyler played at Appalachian State and spent a year playing in the Frontier League with the River City Rascals.

Tyler had just turned a year old the night Beth and I watched his dad launch a bomb into the Fenway night. But a quarter century later the baseball thread that is Craig Faulkner, Raymond Sinibaldi and Bob Zupcic found its way to Greenville North Carolina and the campus of Eastern Carolina University where Tyler will play his part in taking that program to Omaha… And probably sooner than later.

And along the way hearing how his dad brought smiles to his fans, and commanded the respect of the men against whom he competed.

As Terrance Mann sat in the bleachers at the Field of Dreams he turned to Ray Kinsella and said, “This field, this game: it’s a part of our past, Ray. It reminds us of all that once was good and it could be again.”

On Fathers Day, I was reminded of all in the game that was good and as I met the men who guide the likes of Chris Singleton and our boys on the bus, I was mindful of just how good it can be again.

Hello and welcome, my name is Raymond Sinibaldi. An educator for more than two decades, a baseball fan for nearly 60 years, I have authored four books about baseball and her glorious history; with a fifth on the way in late spring of 2015; the first, The Babe in Red Stockings which was co-authored with Kerry Keene and David Hickey. It is a chronicle of Babe's days with the Red Sox. We also penned a screenplay about Babe's Red Sox days so if any of you are Hollywood inclined or would like to represent us in forwarding that effort feel free to contact me through my email. In 2012 we three amigos published Images of Fenway Park in honor of the 100th birthday of Fenway Park. That led to the creation of this blog. The following year, 2013 came my first solo venture, Spring Training in Bradenton and Sarasota. This is a pictorial history of spring training in those two Florida cities. The spring of 2014 brought forth the 1967 Red Sox, The Impossible Dream Season. The title speaks for itself and it also is a pictorial history. Many of the photos in this book were never published before. The spring of 2015 will bring 1975 Red Sox, American League Champions. Another pictorial effort, this will be about the Red Sox championship season of 1975 and the World Series that restored baseball in America. I was fortunate enough to consult with sculptor Franc Talarico on the “Jimmy Fund” statue of Ted Williams which stands outside both Fenway Park and Jet Blue Park Fenway South, in Fort Myers Florida. That story is contained in the near 300 posts which are contained herein. This blog has been dormant for awhile but 2015 will bring it back to life so jump on board, pass the word and feel free to contact me about anything you read or ideas you may have for a topic. Thanks for stopping by, poke around and enjoy. Autographed copies of all my books are available here, simply click on Raymond Sinibaldi and email me.
View all posts by fenwaypark100 →
This entry was posted in Baseball and Life, Fenway Park Baseball, Fenway Park Other and tagged Adam Ward, Austin Bergner, Bob Zupcic, Brandon Elmy, Cameron Indoor Stadium, Charleston South Carolina Shooting, Charleston Southern University, Chris Singleton, Collegiate Diamond Tour, Craig Faulkner, Dalton Guthrie, Dick Groat, Duke University, Eastern Carolina University, Florida Burn, Love is Stronger, Mark Guthrie, Mike Rivera, Tyler Zupcic, UNC Chapel Hill. Bookmark the permalink.

2 Responses to “This field, this game: it’s a part of our past, Ray. It reminds us of all that once was good and it could be again.” Terrence Mann