Ted was ready to go!

His first stop was here, 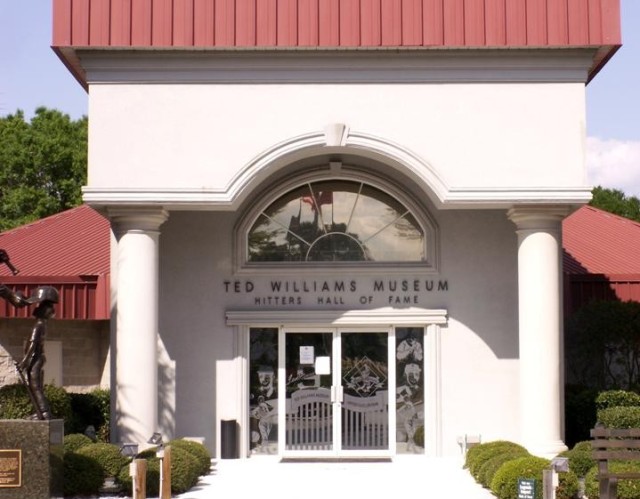 At the Ted Williams Museum and Hitters Hall of fame, in Hernando Florida.

The museum first opened it’s doors in February of 1994 and this was their purpose:

Located in Hernando, Florida in Citrus County, a few blocks from where Ted Williams himself lived during his later years, the Ted Williams Museum and Hitters Hall of Fame is the first Museum ever dedicated, at the time, to a living athlete. While ranked as the number one tourist attraction in Citrus County, the Museum’s goal is to preserve and build on the rich tradition and heritage of our national pastime — baseball. The Museum’s mission is one of outreach and education. The Museum could never operate but for the enormous assistance of a dedicated corps of volunteers who make all the difference. It is a true “labor of love” for the many who have helped the Museum since it first opened in February of 1994.

What this Museum is all about is best described in Ted’s own words; “Through the Ted Williams Museum and Hitters Hall of Fame, we hope to build a lasting monument, an architectural tribute to what I think is the single most difficult thing in all of sports: hitting a baseball. We hope the Museum will become a place millions of baseball fans will visit and enjoy for generations to come. I hope you’ll join us as we transform our dreams into reality.”

Through the years, the museum expanded and added a category called the Wall of Great Achievement. This was a pitcher’s category. The 2003 ceremonies would include the inductions of: Wade Boggs, Dom DiMaggio, Tony Gwynn, Pete Rose and believe it or not Ted Williams into the Hitters Hall of Fame and the induction upon the Wall of Great Achievement for Luis Tiant and Smokey Joe Wood.

However without question the highlight of this day was to be the dedication of the Ted Williams Statue. Franc asked me to join him and his lovely wife Dottie at the ceremonies.

My reaction? Pinch me!

And so it was at this time in Fenway Park history, autumn, 2003.

Hello and welcome, my name is Raymond Sinibaldi. An educator for more than two decades, a baseball fan for nearly 60 years, I have authored four books about baseball and her glorious history; with a fifth on the way in late spring of 2015; the first, The Babe in Red Stockings which was co-authored with Kerry Keene and David Hickey. It is a chronicle of Babe's days with the Red Sox. We also penned a screenplay about Babe's Red Sox days so if any of you are Hollywood inclined or would like to represent us in forwarding that effort feel free to contact me through my email. In 2012 we three amigos published Images of Fenway Park in honor of the 100th birthday of Fenway Park. That led to the creation of this blog. The following year, 2013 came my first solo venture, Spring Training in Bradenton and Sarasota. This is a pictorial history of spring training in those two Florida cities. The spring of 2014 brought forth the 1967 Red Sox, The Impossible Dream Season. The title speaks for itself and it also is a pictorial history. Many of the photos in this book were never published before. The spring of 2015 will bring 1975 Red Sox, American League Champions. Another pictorial effort, this will be about the Red Sox championship season of 1975 and the World Series that restored baseball in America. I was fortunate enough to consult with sculptor Franc Talarico on the “Jimmy Fund” statue of Ted Williams which stands outside both Fenway Park and Jet Blue Park Fenway South, in Fort Myers Florida. That story is contained in the near 300 posts which are contained herein. This blog has been dormant for awhile but 2015 will bring it back to life so jump on board, pass the word and feel free to contact me about anything you read or ideas you may have for a topic. Thanks for stopping by, poke around and enjoy. Autographed copies of all my books are available here, simply click on Raymond Sinibaldi and email me.
View all posts by fenwaypark100 →
This entry was posted in Fenway Park Baseball, Fenway Park Other and tagged Fenway Park, Franc Talarico, Ted Williams Statue. Bookmark the permalink.