The construction of the  new Fenway Park actually took a break during the holidays of 1911. I thought this might be a good time to introduce the Red Sox of 1912 and get to know them a bit. So drum roll if you please…..Ladies and gentlemen, I give you the 1912 Boston Red Sox as they looked in spring training in Hot Springs Arkansas!

This was their top man. He is Garland “Jake” Stahl and he was the first manager to carry a line up card to home plate at Fenway Park. He also played the bulk of first base as well.

The 33-year-old player manager was the oldest man on the team and he was on his second tenure with the Red Sox, having made his debut with them in 1903. At 6’2″ and 195 lbs, Stahl was one of the early “sluggers” in the American League having led the junior circuit with 10 home runs in 1910. In fact he was so intimidating, he was often thrown at and led the league being plunked, twice. 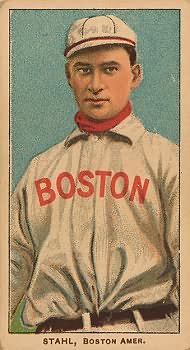 Stahl had eight hits in the 1912 World Series.

He piloted the Red Sox to their best season in history as they won 105 games in their inaugural Fenway season and went on to win their second World Series; starting a stretch of success that baseball had never seen.

A rift opened up between Stahl and owner Jimmy McAleer during the 1913 season which divided the team into factions; with Bill Carrigan, Duffy Lewis and Heinie Wagner siding with McAleer and Tris Speaker, “Smokey” Joe Wood and Larry Gardner in the managers corner.

The owner won this battle, (don’t they always) and Stahl was replaced with Bill Carrigan half way through the 1913 season. Stahl retired and went on to a very successful banking career and served in the air bombing division in France in WW I. Unfortunately a “nervous breakdown”  in 1920 led to hospitalization during which he contracted tuberculosis which took him in 1922.

His place in Fenway Park history is forever insured as the first Red Sox manager to pilot a team in the confines of what has become “America’s Most Beloved Ballpark”.

And so it was at this time in Fenway Park history, winter 1911

Hello and welcome, my name is Raymond Sinibaldi. An educator for more than two decades, a baseball fan for nearly 60 years, I have authored four books about baseball and her glorious history; with a fifth on the way in late spring of 2015; the first, The Babe in Red Stockings which was co-authored with Kerry Keene and David Hickey. It is a chronicle of Babe's days with the Red Sox. We also penned a screenplay about Babe's Red Sox days so if any of you are Hollywood inclined or would like to represent us in forwarding that effort feel free to contact me through my email. In 2012 we three amigos published Images of Fenway Park in honor of the 100th birthday of Fenway Park. That led to the creation of this blog. The following year, 2013 came my first solo venture, Spring Training in Bradenton and Sarasota. This is a pictorial history of spring training in those two Florida cities. The spring of 2014 brought forth the 1967 Red Sox, The Impossible Dream Season. The title speaks for itself and it also is a pictorial history. Many of the photos in this book were never published before. The spring of 2015 will bring 1975 Red Sox, American League Champions. Another pictorial effort, this will be about the Red Sox championship season of 1975 and the World Series that restored baseball in America. I was fortunate enough to consult with sculptor Franc Talarico on the “Jimmy Fund” statue of Ted Williams which stands outside both Fenway Park and Jet Blue Park Fenway South, in Fort Myers Florida. That story is contained in the near 300 posts which are contained herein. This blog has been dormant for awhile but 2015 will bring it back to life so jump on board, pass the word and feel free to contact me about anything you read or ideas you may have for a topic. Thanks for stopping by, poke around and enjoy. Autographed copies of all my books are available here, simply click on Raymond Sinibaldi and email me.
View all posts by fenwaypark100 →
This entry was posted in Fenway Park Baseball and tagged 1912, Fenway Park, Red Sox, Stahl. Bookmark the permalink.