I’m a realist, I believe in miracles.” Wayne Dyer

In snowed in Boston, Monday night April 7, 1975, but that did not keep 34,019 members of the Fenway Faithful from showing up the next afternoon to usher in the 1975 Red Sox season. Tony C’s magical, mystery tour had one more stop! 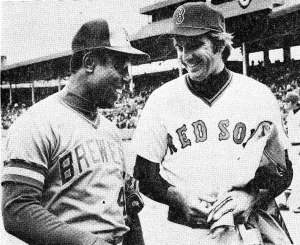 He was back! Having had a terrific spring, he not only made the squad but he was penciled in to DH and bat fourth on opening day at Fenway! History of another sort was also being made as all time home run champ Hank Aaron was making his American League debut as the Milwaukee Brewers DH. The poignancy of this dichotomy was not lost on the Fenway Faithful and they responded in kind with six standing ovations; two for the all time home run king and four for the return of the local kid whose last name ended in a vowel.

Tony C. acknowledges the crowd after his introduction,Yaz is to his right while Hank Aaron looks on.

When Tony C. stepped to the plate in the first inning, Carl Yastrzemski was on first base and the crowd once again rose to its feet and believe it or  not, the sun broke through the gray April sky over Fenway.

Choking back emotion, Conigliaro proceeded to execute a perfect hit and run single to right field. The crowd erupted and for three full minutes stood on their feet cheering. Waiting for Tony at first base was Brewer first baseman and former teammate George “Boomer” Scott. Scott was beaming with his signature wide gold tooth smile and Scott shook his hand, “I knew you could do it, I told these guys in spring you would do it”. Conig and Yaz then executed a double steal to score the Red Sox first run of the season.

Tony Conigliaro went to the plate four times on that chilly, gray April day at Fenway Park. Both Peter Gammons of the Boston Globe and Joe Guilotti of the Boston Herald wrote that the clouds parted each time he stepped to the plate! As if in some harmonic gesture the gods of the diamond allowed Conigliaro, the Fenway Faithful and the baseball world a final glimpse of the light that was Anthony Richard Conigliaro.

Three days later he hit a home run off Mike Cueller of the Orioles, yet it was but a flash. His average was hovering around .200 and fast balls were getting by him with more and more frequency. In May he took a Vida Blue fastball out of the yard at Fenway. It was his 166th career home run and it was his last.

On June 12th, the Red Sox acquired Denny Doyle and needed a roster spot. Tony accepted an option to Pawtucket but by August he called it quits. This time for good. He said simply, “My body is falling apart.”

The Red Sox were on their way to the American League pennant and a World Series with the Cincinnati Reds that would transform baseball.

Tony C., Conig, the local phenom who made it big, was on his way somewhere else. He was not yet sure where, but finally he knew, it was not on the baseball field. What he didn’t know was that the passion play that was his life had yet more tragedy in store.

And so it was, at this time in Fenway Park history, August 1975.

Hello and welcome, my name is Raymond Sinibaldi. An educator for more than two decades, a baseball fan for nearly 60 years, I have authored four books about baseball and her glorious history; with a fifth on the way in late spring of 2015; the first, The Babe in Red Stockings which was co-authored with Kerry Keene and David Hickey. It is a chronicle of Babe's days with the Red Sox. We also penned a screenplay about Babe's Red Sox days so if any of you are Hollywood inclined or would like to represent us in forwarding that effort feel free to contact me through my email. In 2012 we three amigos published Images of Fenway Park in honor of the 100th birthday of Fenway Park. That led to the creation of this blog. The following year, 2013 came my first solo venture, Spring Training in Bradenton and Sarasota. This is a pictorial history of spring training in those two Florida cities. The spring of 2014 brought forth the 1967 Red Sox, The Impossible Dream Season. The title speaks for itself and it also is a pictorial history. Many of the photos in this book were never published before. The spring of 2015 will bring 1975 Red Sox, American League Champions. Another pictorial effort, this will be about the Red Sox championship season of 1975 and the World Series that restored baseball in America. I was fortunate enough to consult with sculptor Franc Talarico on the “Jimmy Fund” statue of Ted Williams which stands outside both Fenway Park and Jet Blue Park Fenway South, in Fort Myers Florida. That story is contained in the near 300 posts which are contained herein. This blog has been dormant for awhile but 2015 will bring it back to life so jump on board, pass the word and feel free to contact me about anything you read or ideas you may have for a topic. Thanks for stopping by, poke around and enjoy. Autographed copies of all my books are available here, simply click on Raymond Sinibaldi and email me.
View all posts by fenwaypark100 →
This entry was posted in Fenway Park Baseball and tagged Conig, Fenway Park, George Scott, Hank Aaron, Red Sox, Tony C, Tony Conigliaro. Bookmark the permalink.