“I started thinking, and you know what happens when a lefthander gets to thinking.” Lefty Grove

When Tom Yawkey purchased the Red Sox in 1933 he embarked on a two-pronged journey. First he began an extensive renovation of the 21-year-old Fenway Park and second he committed to restoring the Red Sox to respectability on the baseball field.

His first move toward respectability on the field was the acquisition of Robert Moses “Lefty” Grove from the Philadelphia Athletics.

Grove was in the midst of seven consecutive 20 win seasons including back to back seasons in 1930 and 31 when he was 28-5 and 31-4! Let that sink in for a minute, a two-year stretch when he was an astounding 59-9! And he had led the league in ERA for four consecutive seasons as well. Oh, and in his 62 starts in those two years, he threw 49 complete games! 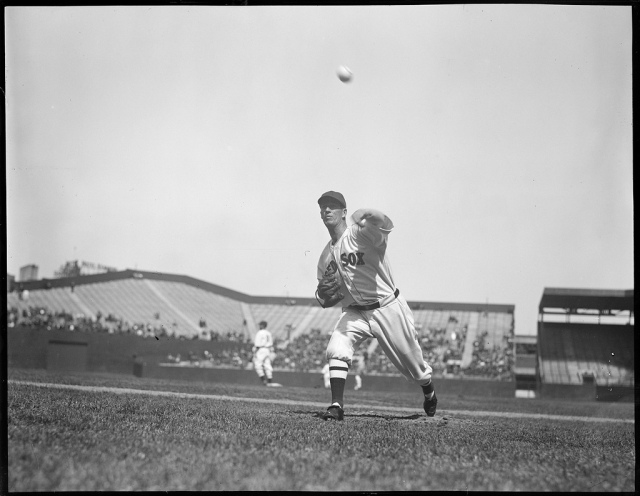 When “Lefty” Grove moved his home address to Fenway Park for the 1934 season, the Red Sox had not had a winning season since they were victorious in the 1918 World Series. Not only that, but in 1932 and 33 they won 43 and 63 games, the worst back to back seasons in their history.  “Lefty” was tabbed as the savior! 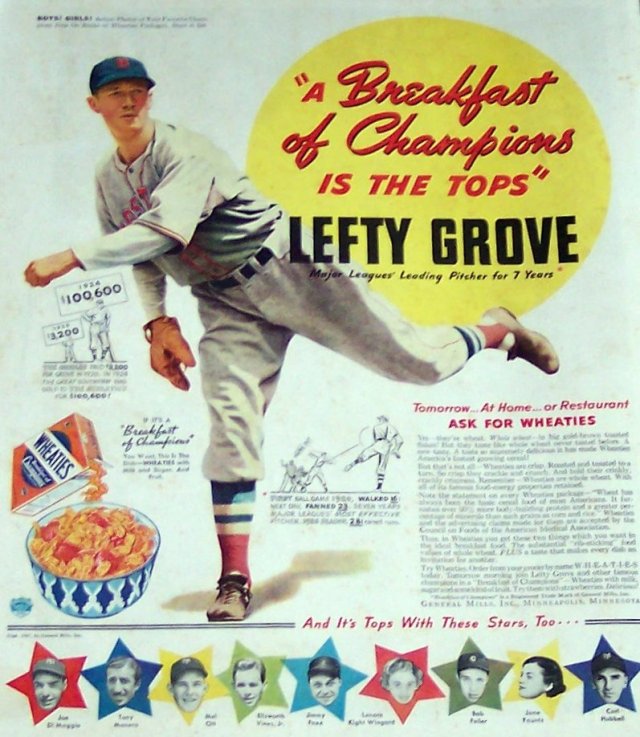 Things didn’t go all that well for “Lefty” as he came up with a sore arm in spring training and it dogged him all year. He went only 8-8 and despite the fact that the Red Sox won 13 more games than the previous year, hit the .500 mark at 76-76 and set a record in Fenway Park attendance, Grove felt the wrath of the Boston media and fans. Undaunted he righted himself and in 1935 he went 20-12, his eighth 20 win campaign.

Although Grove was clearly not the dominant pitcher with the Red Sox that he had been with Philadelphia, he still went 115-52 .689 in eight seasons in Boston and he won four ERA titles as well.

He pitched until the age of 41 and 1941 was his last season. In that last baseball season of innocence before the inception of WW II, Joe DiMaggio hit in 56 consecutive games and Ted Williams hit .406. Somewhat lost in the midst of that drama was Robert Moses “Lefty” Grove’s 300th career win. 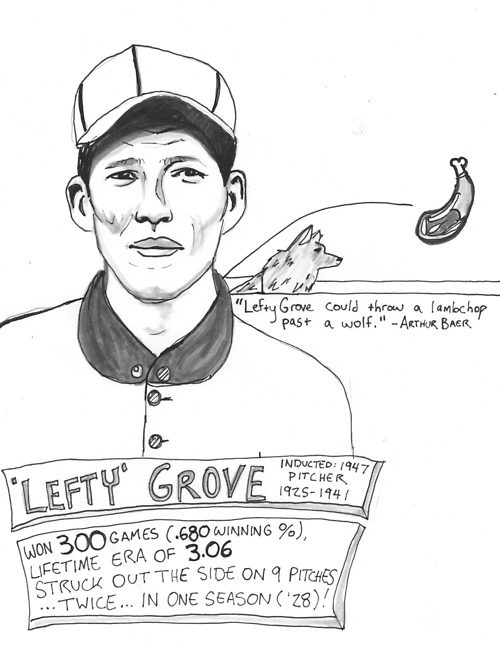 On July 25, 1941 in a game against the Cleveland Indians at Fenway Park, “Lefty” Grove pitched a complete game, 12 hit, 10-6 victory to become baseball’s twelfth 300 game  winner. A dozen  pitchers since have joined that elite group but none of them boast a better winning percentage than Grove.

Baseball pundits today will still place “Lefty” Grove in the discussion of baseball’s most dominant pitchers. His ultimate reward came on January 22, 1947 when, in his first year of eligibility, he was elected to the National Baseball Hall of Fame in Cooperstown!

His place in Fenway Park history is forever preserved as his banner waves in honor on Van Ness Street, a reminder of his role in restoring respectability to the Red Sox in the early years of Tom Yawkey.

Hello and welcome, my name is Raymond Sinibaldi. An educator for more than two decades, a baseball fan for nearly 60 years, I have authored four books about baseball and her glorious history; with a fifth on the way in late spring of 2015; the first, The Babe in Red Stockings which was co-authored with Kerry Keene and David Hickey. It is a chronicle of Babe's days with the Red Sox. We also penned a screenplay about Babe's Red Sox days so if any of you are Hollywood inclined or would like to represent us in forwarding that effort feel free to contact me through my email. In 2012 we three amigos published Images of Fenway Park in honor of the 100th birthday of Fenway Park. That led to the creation of this blog. The following year, 2013 came my first solo venture, Spring Training in Bradenton and Sarasota. This is a pictorial history of spring training in those two Florida cities. The spring of 2014 brought forth the 1967 Red Sox, The Impossible Dream Season. The title speaks for itself and it also is a pictorial history. Many of the photos in this book were never published before. The spring of 2015 will bring 1975 Red Sox, American League Champions. Another pictorial effort, this will be about the Red Sox championship season of 1975 and the World Series that restored baseball in America. I was fortunate enough to consult with sculptor Franc Talarico on the “Jimmy Fund” statue of Ted Williams which stands outside both Fenway Park and Jet Blue Park Fenway South, in Fort Myers Florida. That story is contained in the near 300 posts which are contained herein. This blog has been dormant for awhile but 2015 will bring it back to life so jump on board, pass the word and feel free to contact me about anything you read or ideas you may have for a topic. Thanks for stopping by, poke around and enjoy. Autographed copies of all my books are available here, simply click on Raymond Sinibaldi and email me.
View all posts by fenwaypark100 →
This entry was posted in Fenway Park Baseball and tagged "Lefty" Grove, 300 wins, Fenway Park, Joe DiMaggio, Red Sox, Ted Williams, Tom Yawkey. Bookmark the permalink.

2 Responses to “I started thinking, and you know what happens when a lefthander gets to thinking.” Lefty Grove