Rounding Out the Pitching Staff with the Rest of the Boys…..

In 1912, the Boston Red Sox pitchers pitched a total of 1,362 innings. The five gentlemen we have already met, Wood, Bedient, O’Brien, Collins and Hall pitched 1, 241 of them! However there were six other pitchers who saw action at Fenway Park in 1912 and they accounted for the remaining 121 innings. So let’s meet them in order of innings worked. 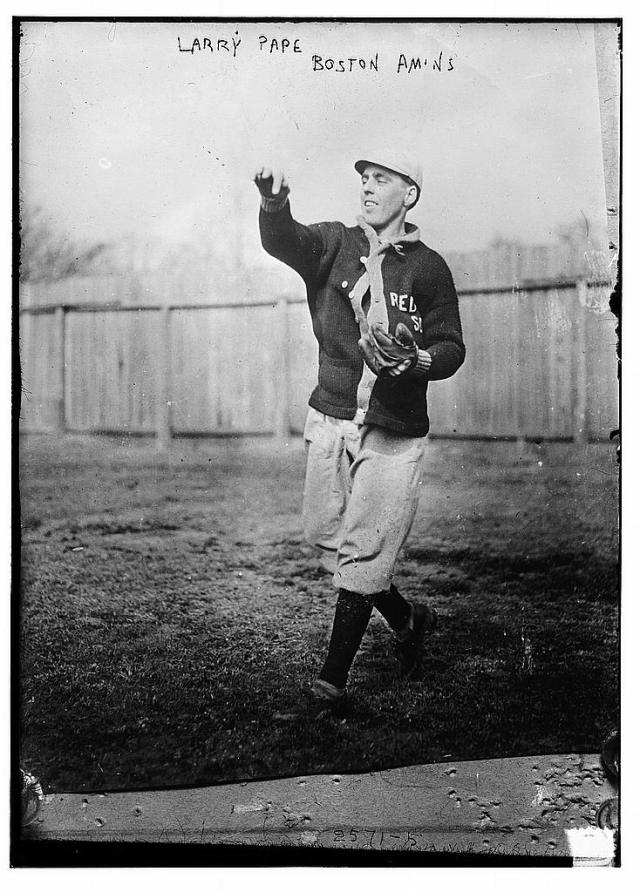 First off is Mr. Larry Pape. Pape appeared in 13 games for the Red Sox in 1912, starting two of them. He was 1-1 and hurled a total of 46 2/3 innings. His major league career lasted three years, all with Boston and ended following the 1912 season. He never pitched in the World Series and he passed away in 1918 on his 33rd birthday, a victim of stomach cancer. 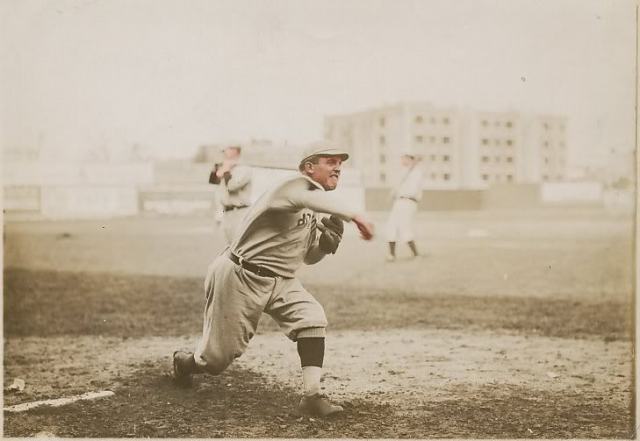 Next is Mr. Eddie Cicotte. Cicotte pitched for the Red Sox from 1908 into 1912. He displayed flashes of brilliance however, he never quite developed the way Red Sox ownership felt he should. He fell into disfavor and after a 1-3 start in 1912 he was sold to the White Sox in July of Fenway’s inaugural season. He earned the moniker “Knuckles” as he was one of the first big league pitchers to master the knuckleball and he also gained infamy during the “Black Sox” scandal of 1919 when he took $10,000 from gamblers to tank the World Series. One of the “eight men out” banned from baseball forever, he lived out his years as a strawberry farmer in Michigan. “I did wrong” he said “and I paid for it for 45 years.” When he died in 1969, his death certificate read, occupation, baseball player. 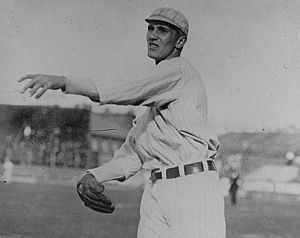 Benjamin Harrison Van Dyke (no relation to Dick of TV and movie fame) pitched in five major league baseball games. Three of them, totaling 14 1/3 innings, for the Boston Red Sox in Fenway Park’s birth year, 1912. He had no career decisions. 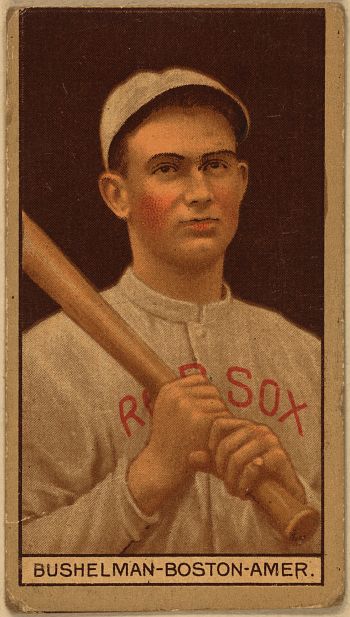 John Francis Bushelman’s career was a bit longer than Benny Van Dyke’s. He pitched three seasons for a total of 26 2/3 innings but history will record that he notched one major league win, coming during Fenway Park’s very first season. Jack toiled for nine seasons in the minor leagues winning 115 games.

Douglass Weldon Smith’s major league baseball career began and ended on July 10, 1912, a three inning stint at Fenway Park against the Detroit Tigers in which he surrendered one run. He was not involved in the decision, a 6-5 Tigers win. He never pitched in the minor leagues. 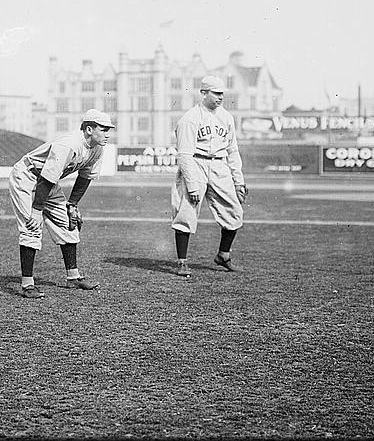 Kurt Moritz “Casey” Hageman, was another with an abbreviated major league baseball career. He pitched in three seasons with the Red Sox, Cardinals and Cubs amassing a 3-7 record in 32 games. His contribution to the 1912 Boston Red Sox totaled one and one third inning pitched. Casey pitched seven seasons of minor league ball and while pitching for the Grand Rapids Stags in the Ohio State League in 1909, he fatally beaned Dayton second baseman Charles “Cupid” Pickney. No doubt a contributing factor to his abbreviated career. 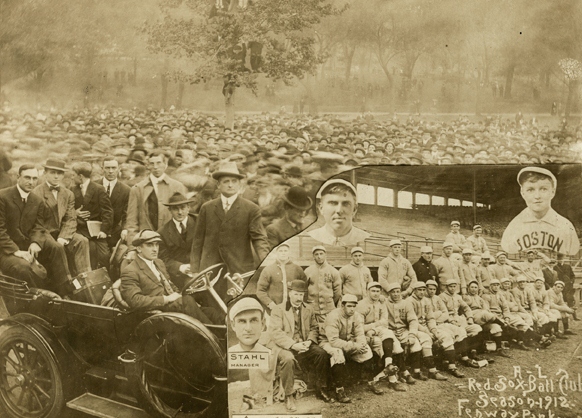 However the names of: Larry Pape, Eddie Cicotte, Ben Van Dyke, Jack Bushelman, Doug Smith and Casey Hageman are forever etched in history as part of Fenway Park’s inaugural season. The season of 1912.

And so it was at this time in Fenway Park history, 1912, her very first year.

Hello and welcome, my name is Raymond Sinibaldi. An educator for more than two decades, a baseball fan for nearly 60 years, I have authored four books about baseball and her glorious history; with a fifth on the way in late spring of 2015; the first, The Babe in Red Stockings which was co-authored with Kerry Keene and David Hickey. It is a chronicle of Babe's days with the Red Sox. We also penned a screenplay about Babe's Red Sox days so if any of you are Hollywood inclined or would like to represent us in forwarding that effort feel free to contact me through my email. In 2012 we three amigos published Images of Fenway Park in honor of the 100th birthday of Fenway Park. That led to the creation of this blog. The following year, 2013 came my first solo venture, Spring Training in Bradenton and Sarasota. This is a pictorial history of spring training in those two Florida cities. The spring of 2014 brought forth the 1967 Red Sox, The Impossible Dream Season. The title speaks for itself and it also is a pictorial history. Many of the photos in this book were never published before. The spring of 2015 will bring 1975 Red Sox, American League Champions. Another pictorial effort, this will be about the Red Sox championship season of 1975 and the World Series that restored baseball in America. I was fortunate enough to consult with sculptor Franc Talarico on the “Jimmy Fund” statue of Ted Williams which stands outside both Fenway Park and Jet Blue Park Fenway South, in Fort Myers Florida. That story is contained in the near 300 posts which are contained herein. This blog has been dormant for awhile but 2015 will bring it back to life so jump on board, pass the word and feel free to contact me about anything you read or ideas you may have for a topic. Thanks for stopping by, poke around and enjoy. Autographed copies of all my books are available here, simply click on Raymond Sinibaldi and email me.
View all posts by fenwaypark100 →
This entry was posted in Fenway Park Baseball and tagged 1912, Ben Van Dyke, Buck O'Brien, Casey Hageman, Charles "Cupid" Pickney, Charley Hall, Doug Smith, Eddie Cicotte, Fenway Park, hot springs arkansas, Hugh Bedient, Jack Bushelman, Larry Pape, Ray Collins, Red Sox, smokey joe wood. Bookmark the permalink.