“The Mystic Chords of Memory”…..Abraham Lincoln

I am an ephemera freak! There I admit it, I said it, it’s out there and I feel better already. Now you won’t find me on an episode of hoarders or anything but there are a few who might contend that I am slightly over the top.

Now for those of you not in the know, ephemera is: a class of collectible items not originally intended to last for more than a short time, such as tickets, posters, postcards, or labels. It also includes things such as letters, and for the memorabilia lovers, things such as programs and yearbooks. 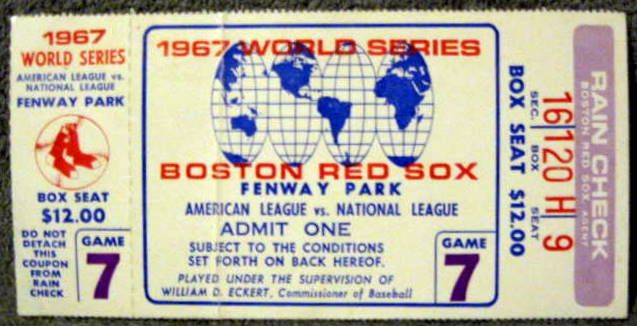 Rain Check for Game 7 of the 1967 World Series at Fenway Park.

I thought it would be a fun and interesting way to end the week by taking a look at programs from the first decade of Fenway Park. 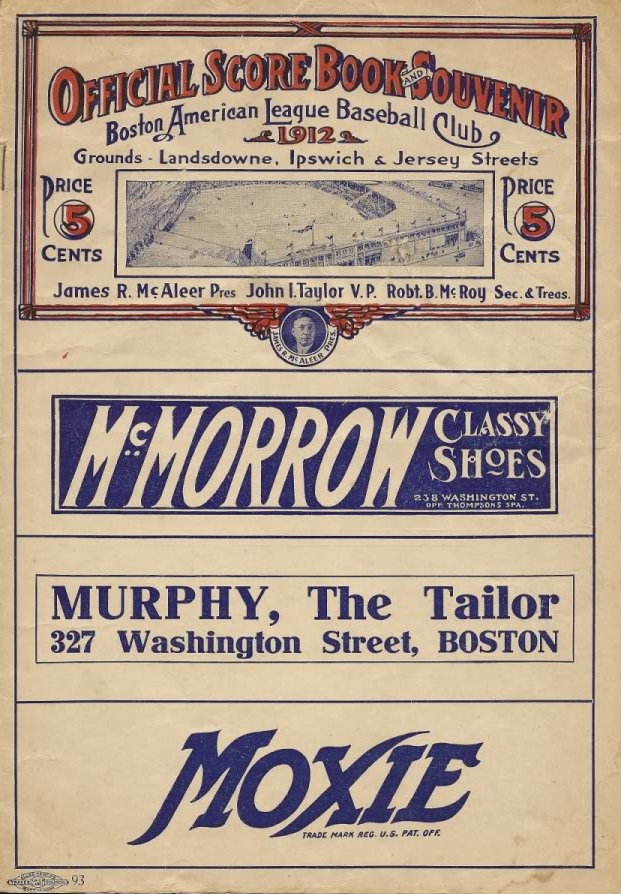 Program from a Fenway Park game in its first year, 1912. 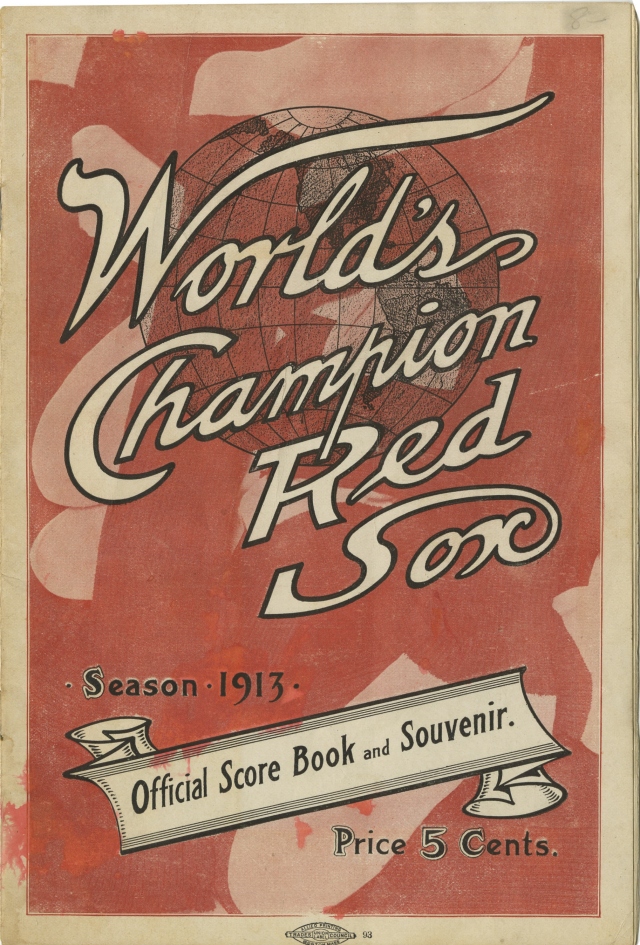 Numbers were not worn on Major League uniforms until the 1920s and the Red Sox did not adopt them until their 1931 season, however as the following photo reveals, numbers were a part of the game and the programs from its inception. 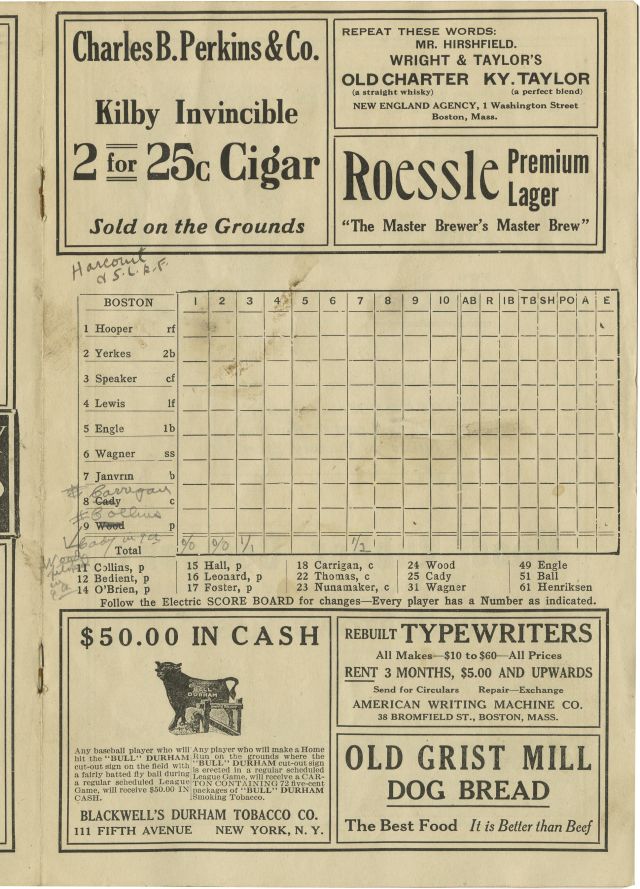 When numbers were first used, they simply reflected the batting order which were printed in the programs.

Babe Ruth became part of the Fenway Park scene in 1914 and this program is from his first game on July 11th. 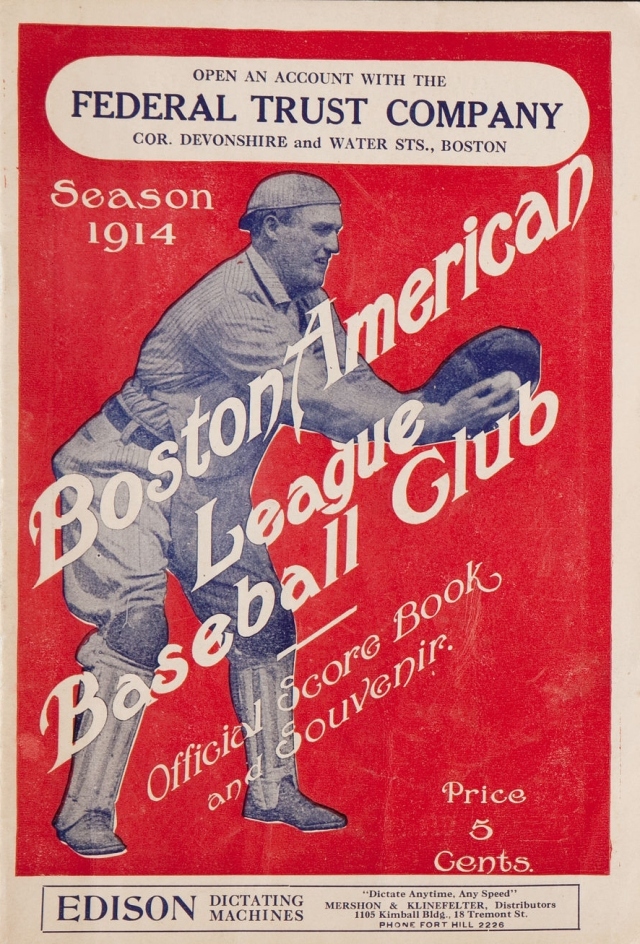 Catcher and Manager Bill Carrigan graced the cover of this 1914 Fenway Park program.

Note Babe’s name written in pencil. He arrived in Boston at about 10:00 AM, was at Fenway by noon and pitched the 3:05 game against the Indians. Oh, and he won!

The 1915 World Series program has an interesting twist to it, note it says Braves Field. The Red Sox played the ’15’ World Series at the brand new, larger venue to accommodate more fans. 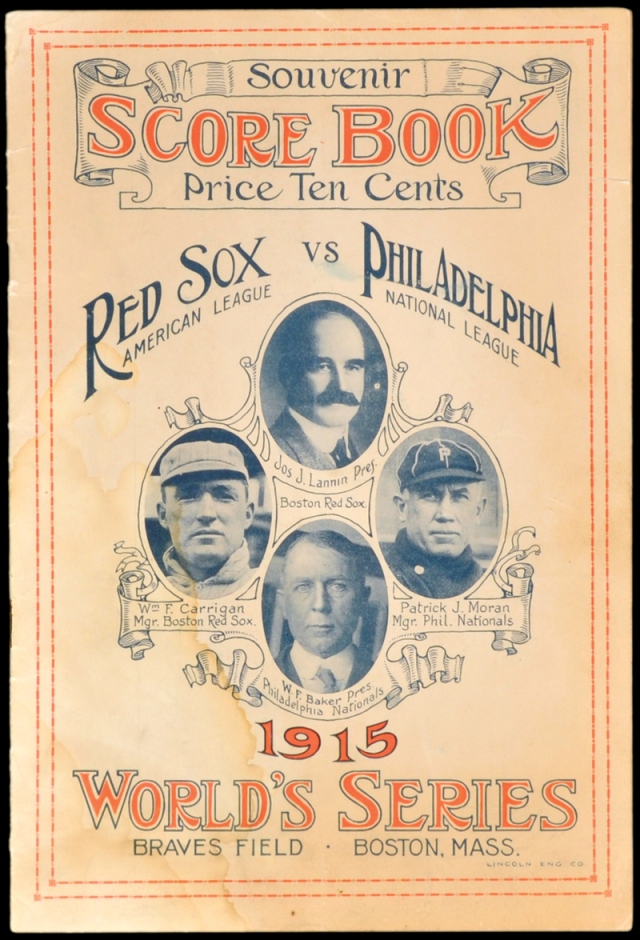 The inside of this program tells the tale of Game 4 of the Series, a complete game 2-1 win by Red Sox pitcher Ernie Shore. 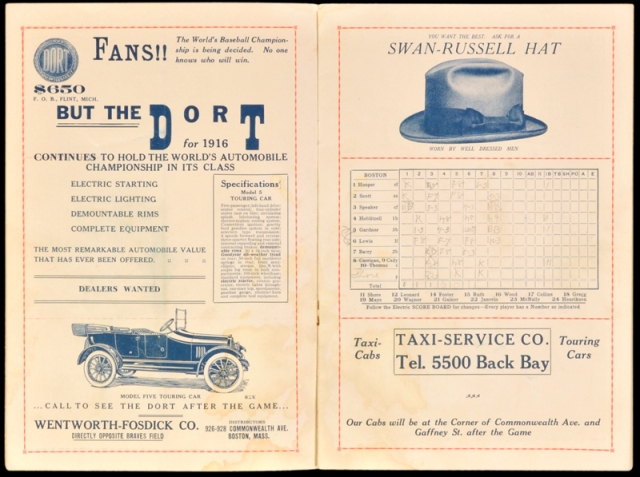 You could have had one of these “Dorts” for only $650 or perhaps become a dealer.

The Red Sox played the 1916 World Series in Braves Field as well, defeating the Dodgers in five games. 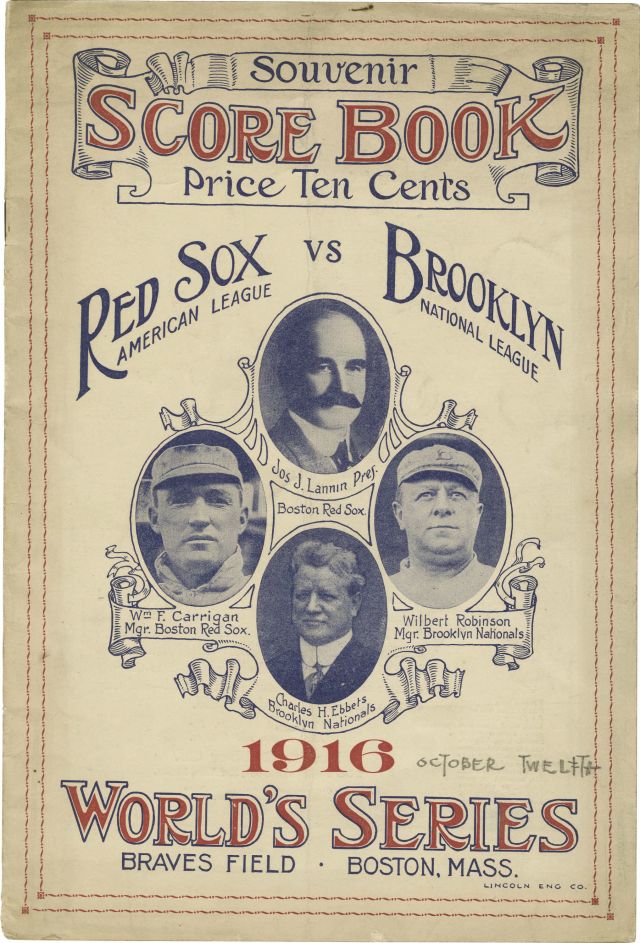 Note the pencil mark indicating the 12th of October. There are some ephemeraphiles (I just made up that word) who prefer their items to be pristine, unused. Not me, I love the fact that a game has been scored, a program has been written in. On a rare occasion, you will get lucky and even snag a ticket stub from the same game! 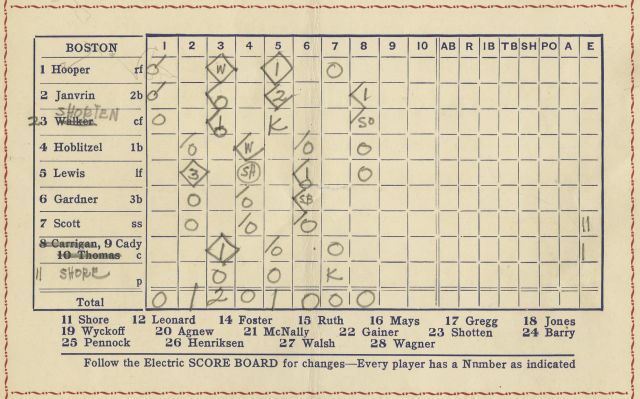 Note the numbers, if the Red Sox had decided to put numbers on their uniforms in 1916, Babe Ruth would have worn the number 15.

This came from Game 5, the clincher which garnered the Red Sox their only back to back World Championships in their history. The 1916 World Series program is among the rarest, with precious few still surviving. This one sold at auction in May of 2007 for $3883.75.

The World Series came back to Fenway Park in 1918 and below is a program from Game 5 of that fabled Series. The Cubs won this game 3-0 extending the Series to a game six in Chicago the following day. 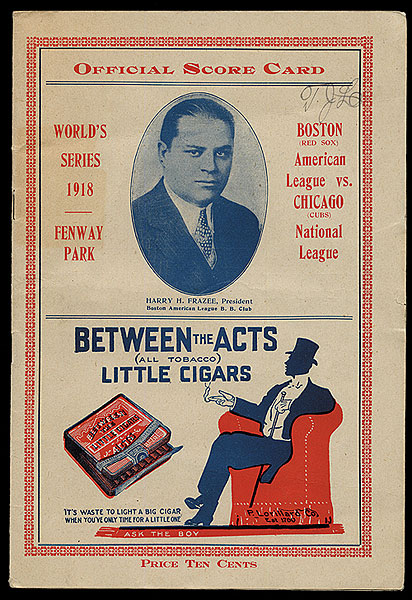 The next World Series game would be played at Fenway Park in 1946.

The historical significance of this particular program adds considerably to its value. It sold at auction last year for, $23,500.00! Wow, that’s almost four “Dorts” worth! 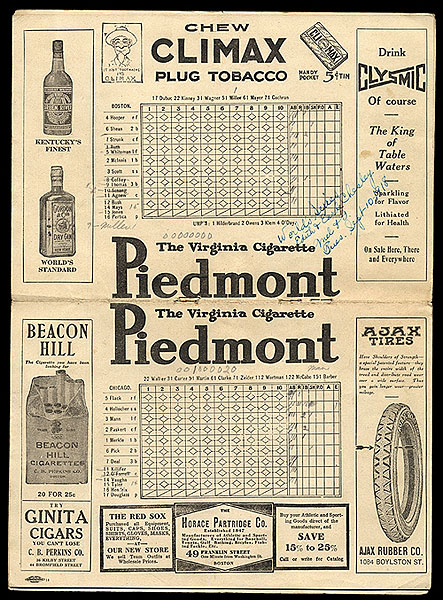 The 1918 World Championship was Boston’s fourth in seven years. Note that Ruth is printed in and crossed out of the fourth spot in the line up, having pitched the day before.

So there you have it, a quick look at the programs of yesteryear, stories nearly a century old told in the paper and pencil remnants of fans whose memories add links in the chain of the “mystic chords of memory” which are such a part of the Red Sox story. The Fenway Park story!

Hello and welcome, my name is Raymond Sinibaldi. An educator for more than two decades, a baseball fan for nearly 60 years, I have authored four books about baseball and her glorious history; with a fifth on the way in late spring of 2015; the first, The Babe in Red Stockings which was co-authored with Kerry Keene and David Hickey. It is a chronicle of Babe's days with the Red Sox. We also penned a screenplay about Babe's Red Sox days so if any of you are Hollywood inclined or would like to represent us in forwarding that effort feel free to contact me through my email. In 2012 we three amigos published Images of Fenway Park in honor of the 100th birthday of Fenway Park. That led to the creation of this blog. The following year, 2013 came my first solo venture, Spring Training in Bradenton and Sarasota. This is a pictorial history of spring training in those two Florida cities. The spring of 2014 brought forth the 1967 Red Sox, The Impossible Dream Season. The title speaks for itself and it also is a pictorial history. Many of the photos in this book were never published before. The spring of 2015 will bring 1975 Red Sox, American League Champions. Another pictorial effort, this will be about the Red Sox championship season of 1975 and the World Series that restored baseball in America. I was fortunate enough to consult with sculptor Franc Talarico on the “Jimmy Fund” statue of Ted Williams which stands outside both Fenway Park and Jet Blue Park Fenway South, in Fort Myers Florida. That story is contained in the near 300 posts which are contained herein. This blog has been dormant for awhile but 2015 will bring it back to life so jump on board, pass the word and feel free to contact me about anything you read or ideas you may have for a topic. Thanks for stopping by, poke around and enjoy. Autographed copies of all my books are available here, simply click on Raymond Sinibaldi and email me.
View all posts by fenwaypark100 →
This entry was posted in Fenway Park Baseball and tagged "Dort", 1912, 1915 World Series, 1916 World Series, 1918 World Series, Ephemera, Fenway Park, Program, Red Sox. Bookmark the permalink.