“An opener is not like any other game. There’s that little extra excitement, a faster beating of the heart. You have that anxiety to get off to a good start, for yourself and for the team. You know that when you win the first one, you can’t lose ’em all.” Early Wynn

You have got to be kidding me! I can’t stand it! It started in the year 2000 so I should be used to it should I not? Then why? Why am I so irritated? Why am I so aggravated? Why does it seem that the more it happens the more it bothers me? I don’t get it! I can’t get it! I don’t ever want to get it! What in the hell are we doing opening the baseball season in Japan? 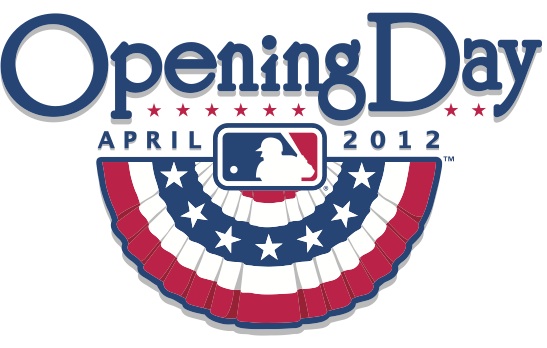 Yesterday while most of us were sleeping, the Seattle Mariners beat the Oakland A’s 3-1 in an 11 inning contest in Tokyo Japan!

Now don’t misunderstand me or get me wrong, I have nothing against the good folks of Tokyo Japan, I’m not a xenophobe, it’s just that I’m an old school kind of guy. Old school kind of guys have a tendency to appreciate and want to honor tradition and there is no sport more steeped in and linked to tradition than our American Pastime!http://www.youtube.com/watch?v=7SB16il97yw

“The one constant through all the years has been baseball” and for 120 years the one constant was Opening Day in Cincinnati! Why Cincinnati you say? Well that’s where it all began, sort of. 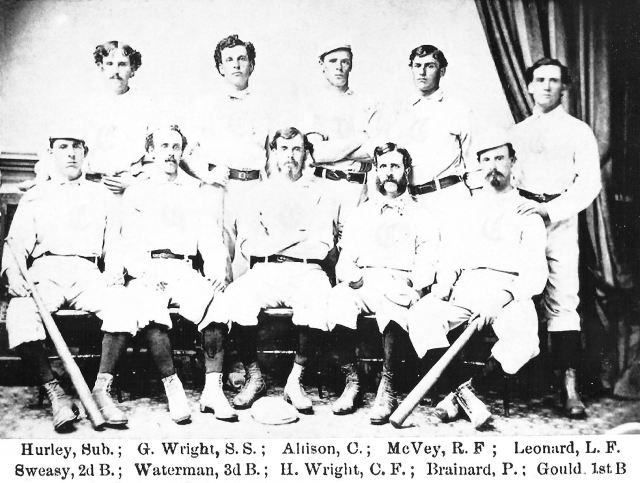 The 1869 version of the Cincinnati Red Stockings were the first ever professional baseball team. In honor of that and, with a few exceptions, from then until 1990, the season always opened there on the day before it opened every place else.

It irritated me in 1990 when that tradition was abandoned but now that irritation is compounded by the fact that we now open the season out of the country and I am left to ponder the whys of all that. 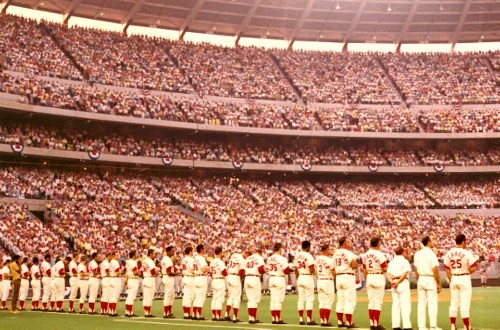 Oh I get that it’s about new markets, broadening and cultivating the international fan base. I get that the primary reason behind it all is

I get all that, but really, really? Can’t all that be done and still open the season right here in good old Cincinnati? In the heart of the land from which this great game was spawned?

The Great American Ballpark has been the home of the Cincinnati Reds since 2003 and it has never hosted the inaugural game of a baseball season.

In May of 2004, in Pittsfield Massachusetts a document, dated in 1791, was revealed which made reference to a bylaw protecting the windows of the towns meeting-house by refusing to allow baseball to be played within 80 yards of the new building.

On October 6, 1845, Alexander Cartwright’s  Knickerbocker Club played an intrasquad game at Elysian Fields in Hoboken New Jersey. It’s significance is that it appears to be the first ever baseball game which was written about in the newspaper.

There is a uniquely American flavor to this the greatest of games. And it is, in fact in this writers opinion, the greatest thing which this great country has ever exported! And I am all about the continued exportation and cultivation of it throughout the world.

Ahhhhhh baseball is upon us! 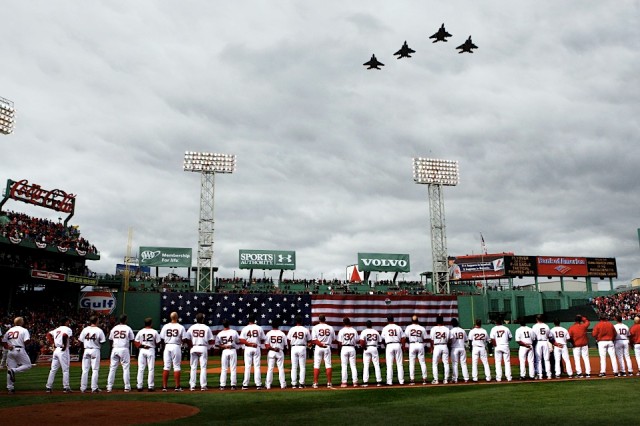 Hello and welcome, my name is Raymond Sinibaldi. An educator for more than two decades, a baseball fan for nearly 60 years, I have authored four books about baseball and her glorious history; with a fifth on the way in late spring of 2015; the first, The Babe in Red Stockings which was co-authored with Kerry Keene and David Hickey. It is a chronicle of Babe's days with the Red Sox. We also penned a screenplay about Babe's Red Sox days so if any of you are Hollywood inclined or would like to represent us in forwarding that effort feel free to contact me through my email. In 2012 we three amigos published Images of Fenway Park in honor of the 100th birthday of Fenway Park. That led to the creation of this blog. The following year, 2013 came my first solo venture, Spring Training in Bradenton and Sarasota. This is a pictorial history of spring training in those two Florida cities. The spring of 2014 brought forth the 1967 Red Sox, The Impossible Dream Season. The title speaks for itself and it also is a pictorial history. Many of the photos in this book were never published before. The spring of 2015 will bring 1975 Red Sox, American League Champions. Another pictorial effort, this will be about the Red Sox championship season of 1975 and the World Series that restored baseball in America. I was fortunate enough to consult with sculptor Franc Talarico on the “Jimmy Fund” statue of Ted Williams which stands outside both Fenway Park and Jet Blue Park Fenway South, in Fort Myers Florida. That story is contained in the near 300 posts which are contained herein. This blog has been dormant for awhile but 2015 will bring it back to life so jump on board, pass the word and feel free to contact me about anything you read or ideas you may have for a topic. Thanks for stopping by, poke around and enjoy. Autographed copies of all my books are available here, simply click on Raymond Sinibaldi and email me.
View all posts by fenwaypark100 →
This entry was posted in Fenway Park Baseball and tagged Alexander Cartwright, Cincinnati Red Stockings, Cincinnati Reds, Crosley Field, Elysian Fields, Fenway Park, Hoboken NJ, Knickerbocker Club, Opening Day, Pittsfield MA, Red Sox, Riverfront Stadium, The Great American Ballpark. Bookmark the permalink.