A Rainy Sunday With a Good Book…..

Fenway Park’s 100th birthday weekend came to an end yesterday in a rain drenched Sunday which mercifully postponed last nights game with the Yankees at Fenway Park. As the Red Sox teeter on the brink of what could become a disastrous season, the painful reality that the they might just be that bad looms and with that the thought that Fenway might just be the only thing to celebrate this historic summer.

And yesterday at the BU Barnes and Noble bookstore, David, Kerry and I gathered to do just that, celebrate Fenway Park.

Some folks gathered and listened to stories about America’s Most Beloved Ballpark.

TD stopped by to regale the gathering with a story of Ted Williams.

TD and Yours Truly.

With a passion that is only his, Kerry delighted the folks with his story of being a 50 year old ball boy at Fenway Park.

Kerry Keene in his element.

We told Fenway tales and signed some books and the dreariness of the weather and the Red Sox start was, for a while, forgotten. The magic of Fenway carried the day.

Kerry introduced Addy to the folks.

And with the help of her mom and her baby sister, she, a bit reluctantly, said hello to all.

And then she signed her first book! 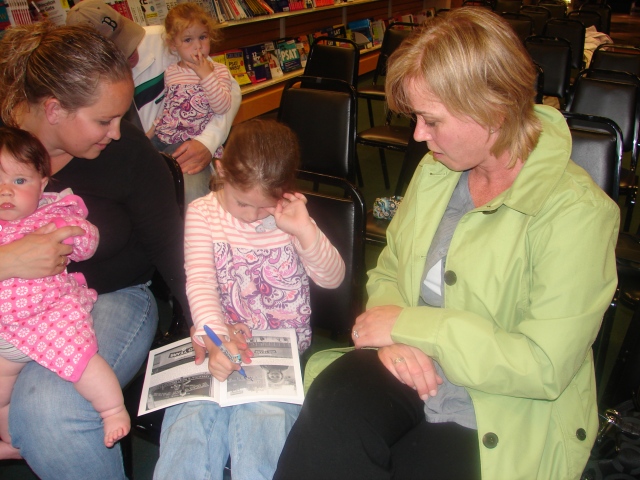 Making her the star of the day!

A heartwarming day shared with Fenway, family and friends and I am once again reminded of how blessed I am. And these two knuckleheads certainly add to those blessings!

Hello and welcome, my name is Raymond Sinibaldi. An educator for more than two decades, a baseball fan for nearly 60 years, I have authored four books about baseball and her glorious history; with a fifth on the way in late spring of 2015; the first, The Babe in Red Stockings which was co-authored with Kerry Keene and David Hickey. It is a chronicle of Babe's days with the Red Sox. We also penned a screenplay about Babe's Red Sox days so if any of you are Hollywood inclined or would like to represent us in forwarding that effort feel free to contact me through my email. In 2012 we three amigos published Images of Fenway Park in honor of the 100th birthday of Fenway Park. That led to the creation of this blog. The following year, 2013 came my first solo venture, Spring Training in Bradenton and Sarasota. This is a pictorial history of spring training in those two Florida cities. The spring of 2014 brought forth the 1967 Red Sox, The Impossible Dream Season. The title speaks for itself and it also is a pictorial history. Many of the photos in this book were never published before. The spring of 2015 will bring 1975 Red Sox, American League Champions. Another pictorial effort, this will be about the Red Sox championship season of 1975 and the World Series that restored baseball in America. I was fortunate enough to consult with sculptor Franc Talarico on the “Jimmy Fund” statue of Ted Williams which stands outside both Fenway Park and Jet Blue Park Fenway South, in Fort Myers Florida. That story is contained in the near 300 posts which are contained herein. This blog has been dormant for awhile but 2015 will bring it back to life so jump on board, pass the word and feel free to contact me about anything you read or ideas you may have for a topic. Thanks for stopping by, poke around and enjoy. Autographed copies of all my books are available here, simply click on Raymond Sinibaldi and email me.
View all posts by fenwaypark100 →
This entry was posted in Fenway Park Baseball, Fenway Park Other and tagged BU Bookstore, Dave Hickey, Fenway Park, Fenway Park 100th Birthday, Images of Fenway Park, Kerry Keene, Red Sox. Bookmark the permalink.

4 Responses to A Rainy Sunday With a Good Book…..