Tragedy struck the Red Sox yesterday when Fenway Park announcer Carl Beane died  after suffering a heart attack while driving his car in Southbridge Massachusetts. He was 59 years old.

Taking his cue from greats Bob Sheppard (Yankee Stadium) and Fenway Park’s own Sherm Feller, Carl’s baritone voice enhanced the Fenway Park experience, it did not become it! He instinctively knew that and why not, for he grew up in Massachusetts, a fan of the Red Sox and spent his youth listening to Sherm Feller announcing games at Fenway.

His philosophy was simple, “just give them the information and get out of the way. They don’t come here to hear the P.A. announcer. They come here to watch the game and enjoy this jewel of a ballpark.” (USA Today)

A radio sports broadcaster since 1972, Beane became the voice of Fenway Park in 2003 and was at the mike during the redemptive campaign of 2004 and again in the World Championship season of 2007. His voice has been heard throughout the baseball world, from the hallowed halls of Cooperstown to the revered nooks and crannies of his beloved Fenway Park, and beyond.

I never met Carl Beane and only know him the way the millions of the Fenway Faithful have come to know him through his work as Fenway’s voice. However his energy touched the lives of so many beyond the confines of Fenway Park and his impact is best told in their words,

‘The only thing bigger than his booming voice at Fenway Park, is his even bigger heart and his desire to make a positive impact on those around him.” Elaine Martel – President, Marlboro Lions Club – May 2007

“Mr. Beane is a homegrown man. He has never forgotten his roots and where he came from. He returns to our local schools each year to talk to students about literacy, achieving their goals and also to share his sports knowledge and memorabilia. Mr. Beane is truly a wonderful tribute to our hometown!” Mrs. Murphy, Phelps School – Agawam, MA 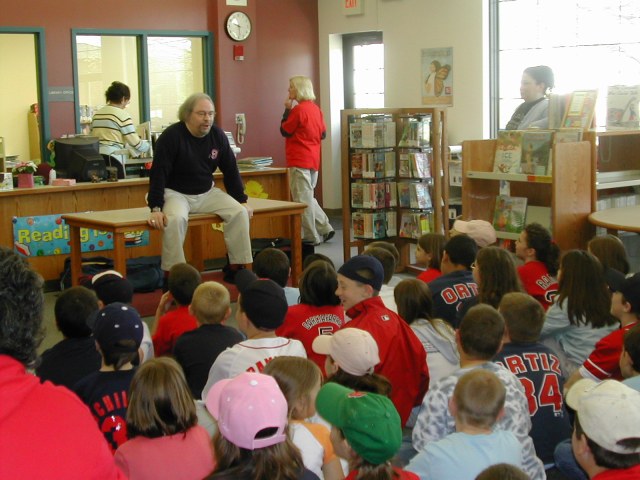 The last time I heard Carl work was April 20, 2012 and he was in his finest form. He welcomed all to the 100th anniversary celebration of Fenway Park and then in true Beane fashion he “got out of the way” as the moments and the day spoke for themselves.

Carl Beane’s voice has been silenced however the impact of his life lives on in the hearts of those who loved him and in the lives of all those he touched from the school kids he regaled to the couples whose weddings he announced.

I never knew Carl Beane but I thank him, for the part he played in always welcoming the little boy in me home.

Hello and welcome, my name is Raymond Sinibaldi. An educator for more than two decades, a baseball fan for nearly 60 years, I have authored four books about baseball and her glorious history; with a fifth on the way in late spring of 2015; the first, The Babe in Red Stockings which was co-authored with Kerry Keene and David Hickey. It is a chronicle of Babe's days with the Red Sox. We also penned a screenplay about Babe's Red Sox days so if any of you are Hollywood inclined or would like to represent us in forwarding that effort feel free to contact me through my email. In 2012 we three amigos published Images of Fenway Park in honor of the 100th birthday of Fenway Park. That led to the creation of this blog. The following year, 2013 came my first solo venture, Spring Training in Bradenton and Sarasota. This is a pictorial history of spring training in those two Florida cities. The spring of 2014 brought forth the 1967 Red Sox, The Impossible Dream Season. The title speaks for itself and it also is a pictorial history. Many of the photos in this book were never published before. The spring of 2015 will bring 1975 Red Sox, American League Champions. Another pictorial effort, this will be about the Red Sox championship season of 1975 and the World Series that restored baseball in America. I was fortunate enough to consult with sculptor Franc Talarico on the “Jimmy Fund” statue of Ted Williams which stands outside both Fenway Park and Jet Blue Park Fenway South, in Fort Myers Florida. That story is contained in the near 300 posts which are contained herein. This blog has been dormant for awhile but 2015 will bring it back to life so jump on board, pass the word and feel free to contact me about anything you read or ideas you may have for a topic. Thanks for stopping by, poke around and enjoy. Autographed copies of all my books are available here, simply click on Raymond Sinibaldi and email me.
View all posts by fenwaypark100 →
This entry was posted in Fenway Park Baseball and tagged Carl Beane, Fenway Park, Red Sox. Bookmark the permalink.