On Monday I wrote about the 1978 Red Sox. Today I give you some “78” memorabilia to bring back that great season.

Here’s a good place to start. Rice was in his fourth full season and had become the most feared hitter in baseball. He led the league in hits, triples, home runs, RBI, slugging percentage, OPS and he became the first American League player to amass 400 total bases since Joe DiMaggio did it in 1936. no American Leaguer has done it since. He was the 1978 MVP.

He also graced the cover of the second edition of the ’78’ Red Sox yearbook.

Carlton Fisk was on the cover of the first edition.

Rick Burleson graced the cover of a Red Sox pocket Schedule for 1978. “The Rooster” was the anchor of the Red Sox infield and the American League all-star shortstop in 1977, ’78’ and ’79’.

The Captain, senior citizen and according to the October issue of Sport Magazine the Red Sox patron saint was Carl Yastrzemski. The 38-year-old “utility man” played 63 games in left field, seven in center, 47 at first base and 25 at the DH spot. He hit .277 with 17 home runs and 81 RBI.

Rice was gracing the covers of sports publications for the entire summer. Here’s a May issue of the Sporting News.

The August 1978 edition to Baseball Digest.

He also found his way to the cover of the WSBK TV 38 pocket schedule.

The Sport Magazine cover of May 1978 featured the Red Sox left fielder who played in all 163 games of the ’78’ season.

There were several versions of Red Sox programs throughout the 1978 season, this is the first edition of that historic season. Featured are top left to right, second baseman Denny Doyle, Yaz and Burleson, middle George Scott, Fisk and third baseman Butch Hobson, with Rice and Lynn on the bottom.

Dennis Eckersley was 20-8 for the ’78’ Sox after being acquired late in spring training in a blockbuster trade with the Indians.

The ticket stub remains a favorite memorabilia piece of fans and has been throughout the ages. This game marks the 69th game at Fenway Park, a game the Sox dropped to Oakland, 4-3.

The playoff game won by the Yankees 5-4. 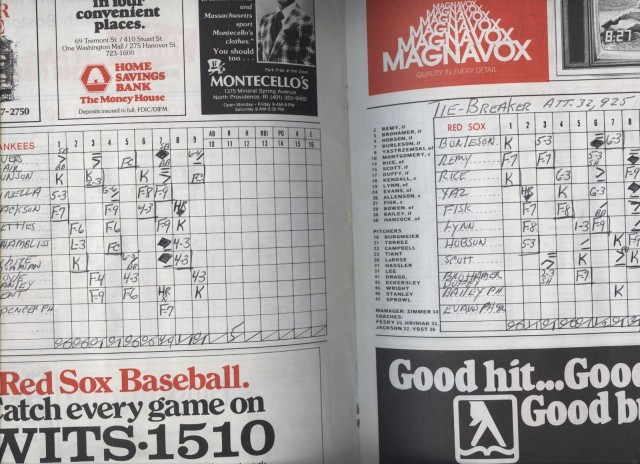 One of my favorite types of baseball memorabilia is the scored program. Here is one from the ’78’ playoff game.

I wrote on Monday that the 1978 Red Sox team did not choke and I will stand by that until my dying day. Did they squander their lead? No doubt. They went from four games up September 7th to three and a half back on September 16th. They sank like a rock, however, and this is a big however, from that point on they went 11-2 the rest of the way to catch the Yankees on the last day! Included in those 11 wins was eight in a row! Eight in a row when one loss would have in all likely ended it all! That, my friends is not the performance of a choking team. To say the Red Sox choked is to take away from the Yankees a tremendous summer where they went 40-16 the months of August and September, that is .714 baseball!

Hello and welcome, my name is Raymond Sinibaldi. An educator for more than two decades, a baseball fan for nearly 60 years, I have authored four books about baseball and her glorious history; with a fifth on the way in late spring of 2015; the first, The Babe in Red Stockings which was co-authored with Kerry Keene and David Hickey. It is a chronicle of Babe's days with the Red Sox. We also penned a screenplay about Babe's Red Sox days so if any of you are Hollywood inclined or would like to represent us in forwarding that effort feel free to contact me through my email. In 2012 we three amigos published Images of Fenway Park in honor of the 100th birthday of Fenway Park. That led to the creation of this blog. The following year, 2013 came my first solo venture, Spring Training in Bradenton and Sarasota. This is a pictorial history of spring training in those two Florida cities. The spring of 2014 brought forth the 1967 Red Sox, The Impossible Dream Season. The title speaks for itself and it also is a pictorial history. Many of the photos in this book were never published before. The spring of 2015 will bring 1975 Red Sox, American League Champions. Another pictorial effort, this will be about the Red Sox championship season of 1975 and the World Series that restored baseball in America. I was fortunate enough to consult with sculptor Franc Talarico on the “Jimmy Fund” statue of Ted Williams which stands outside both Fenway Park and Jet Blue Park Fenway South, in Fort Myers Florida. That story is contained in the near 300 posts which are contained herein. This blog has been dormant for awhile but 2015 will bring it back to life so jump on board, pass the word and feel free to contact me about anything you read or ideas you may have for a topic. Thanks for stopping by, poke around and enjoy. Autographed copies of all my books are available here, simply click on Raymond Sinibaldi and email me.
View all posts by fenwaypark100 →
This entry was posted in Fenway Park Baseball and tagged 1978, 1978 Playoff Game, Butch Hobson, Carl Yastrzemski, Carlton Fisk, Dennis Eckersley, Denny Doyle, Don Zimmer, Fenway Park, Fred Lynn, George Scott, Jim Rice, Red Sox, Rick Burleson, Yaz. Bookmark the permalink.