El Perfecto is more than a Cigar…..

While the Red Sox bats were resurrecting themselves on Wednesday night in Miami Florida, thumping the Marlins 10-2 and winning back to back games for the first time in nearly two weeks, Giants pitcher Matt Cain was making history.

David Ortiz went 2-2 Wednesday night with three RBI, including his 15th home run of the season.

Now, what that did was equal the record, held by none other than Sandy Koufax, for most strikeouts in a perfect game. Not bad company eh?

The incomparable Koufax painted his canvas of perfection in Dodger Stadium on the night of September 9, 1965. His opponent, the Chicago Cubs, his mound rival, southpaw Bob Hendley.

I read a headline to an online article which read, “Did Matt Cain pitch the Greatest Game Ever?” To be honest, I disdain that nonsense, I mean really, how the hell can you determine something like that? I wouldn’t have a clue on where to begin to evaluate that but I will tell you this; there has NEVER been a night of pitching like there was the night of September 9, 1965 in Dodger Stadium, and I’ll give you a hint, read this headline, in totality. 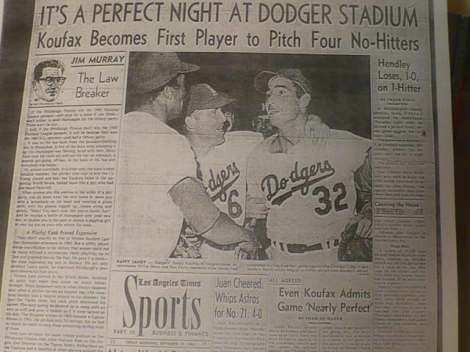 Did you catch it? Let me help, the sub headline reads “Hendley Loses 1-0 on 1-Hitter.” What? He threw a one hitter and lost? That’s right boys and girls there was exactly one hit in the entire baseball game. A total of 43 hitters came to bat that night in Dodgertown, and three of them reached base, obviously all of them Dodgers.

When these two lefties squared off that night, the Dodgers were deadlocked with their arch rival Giants as they battled to represent the National League in the World Series. The Cubs were, well, the Cubs, in eighth place 16 back.

Henley was a journeyman pitcher; he pitched for seven seasons on four different teams. His record was 48-52 and his ERA was 3.97. He fired six career shutouts and had a career high 112 strikeouts while pitching for the Milwaukee Braves in 1962. A total of three times he struck out 10 or more in a game and he threw a total of 25 complete games.

Hendley had been acquired by the Cubs on the 29th of May and had been used out of the bull pen for most of the summer. He was making his sixth start of the year and a week before had beaten the Cardinals at Wrigley Field to even his record at 2-2.

Donald Wayne Young was making his major league debut that night playing center field and he was the Cubs leadoff hitter. After he popped out to second to start the game Chicago’s rookie second baseman, Glenn Beckert stepped in. Beckert was called out on strikes but not before he rifled a line drive down the third base line that was “just foul”. Koufax got right fielder Billy Williams looking as well and the Cubs were gone in the first.

Hendley set the Dodgers down one, two, three in their half of the first and the game was on. In the Cubs half of the second, Koufax recorded his third strikeout of the night getting Ernie Banks swinging on what LA announcer Vince Scully called a fork ball. (Today I think they’d call it a splitter.)

Koufax struck out Ernie Banks three times the night of his El Perfecto. 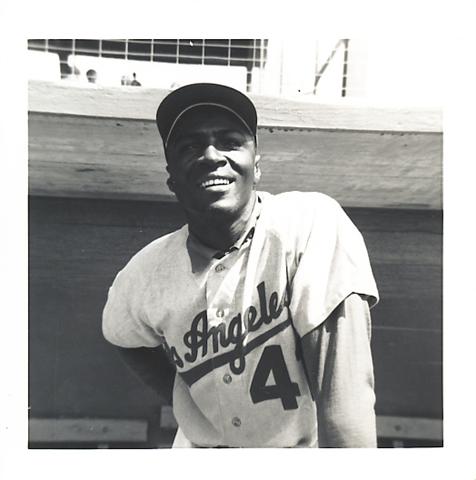 Johnson scored the only run of the game in Koufax’s perfect game.

Hendley’s perfect game evaporated with a walk to Dodger left fielder Lou Johnson leading off the fifth and his shutout was about to be gone as well. Sweet Lou was sacrificed to second by Ron Fairly and with Jim Lefebvre at the plate, Johnson broke for third. 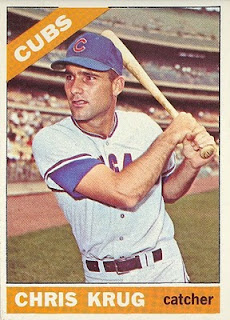 Cubs catcher, Chris Krug found his way into history when his throw got passed Ron Santo at third allowing Johnson to score and giving the Dodgers a 1-0 lead.  Hendley was undaunted however, striking out Lefebvre and getting Parker to ground out to end the inning. His perfect game was gone and so was his shutout, yet after five innings Hendley’s no-hitter was still in tact.

It took two great defensive plays in the Cubs sixth to preserve Koufax’s march to perfection. A great pick by Wes Parker at first on a Maury Wills throw from short on the first out and then another superb play by Jim Gilliam charging in from third on a bunt by Cubs shortstop Don Kessinger. Koufax struck out Hendley to end the inning, his seventh of the game.

The Dodgers went up and down in the sixth as did the Cubs in the seventh and there were two outs in the Dodger half of the seventh when Johnson stepped in again. He looped a pop up just out of the reach of Banks at first base and cruised into second for a double. He died there when Hendley got Fairly to ground out to short.

Kuenn struck out to end Sandy Koufax’s perfect game. Kuenn made the last out in two of Koufax’s four no-hitters.

Koufax then went into total dominance mode on the mound, striking out the side in the eighth and then again in the ninth sealing his perfect game! The last five he got swinging!

Sandy Koufax hurled the sixth perfect game in modern baseball history. It was the fourth no-hitter of his career and he threw 113 pitches. And today Bob Hendley tells his grandchildren about a night in September of 1965 when he went toe to toe with one of baseball’s all time greats.

Matt Cain pitched a perfect game Wednesday, he struck out 14 batters and will forevermore be linked with Sandy Koufax. Sandy Koufax who was sometimes referred to as ‘the left arm of God”. Not bad Matt, not bad at all.

Hello and welcome, my name is Raymond Sinibaldi. An educator for more than two decades, a baseball fan for nearly 60 years, I have authored four books about baseball and her glorious history; with a fifth on the way in late spring of 2015; the first, The Babe in Red Stockings which was co-authored with Kerry Keene and David Hickey. It is a chronicle of Babe's days with the Red Sox. We also penned a screenplay about Babe's Red Sox days so if any of you are Hollywood inclined or would like to represent us in forwarding that effort feel free to contact me through my email. In 2012 we three amigos published Images of Fenway Park in honor of the 100th birthday of Fenway Park. That led to the creation of this blog. The following year, 2013 came my first solo venture, Spring Training in Bradenton and Sarasota. This is a pictorial history of spring training in those two Florida cities. The spring of 2014 brought forth the 1967 Red Sox, The Impossible Dream Season. The title speaks for itself and it also is a pictorial history. Many of the photos in this book were never published before. The spring of 2015 will bring 1975 Red Sox, American League Champions. Another pictorial effort, this will be about the Red Sox championship season of 1975 and the World Series that restored baseball in America. I was fortunate enough to consult with sculptor Franc Talarico on the “Jimmy Fund” statue of Ted Williams which stands outside both Fenway Park and Jet Blue Park Fenway South, in Fort Myers Florida. That story is contained in the near 300 posts which are contained herein. This blog has been dormant for awhile but 2015 will bring it back to life so jump on board, pass the word and feel free to contact me about anything you read or ideas you may have for a topic. Thanks for stopping by, poke around and enjoy. Autographed copies of all my books are available here, simply click on Raymond Sinibaldi and email me.
View all posts by fenwaypark100 →
This entry was posted in Fenway Park Baseball and tagged Bob Hendley, Chris Krug, David Ortiz, Don Young, Ernie Banks, Fenway Park, Harvey Kuenn, Lou Johnson, Matt Cain, Red Sox, Sandy Koufax. Bookmark the permalink.