Today the United States celebrates its 236th birthday. Wow, that’s a lot of candles. Now I don’t want to be a stick in the mud, nor do I want to diminish the accomplishments of those 56 guys who autographed that spectacular document, however the real birthday of this great nation is June 21st! What? Yup, it’s true.

In fact it’s June 21, 1788, for that was the day that the great state of New Hampshire ratified the Constitution of the United States making it the law of the land and creating the entity of the United States. But that’s OK, I don’t always celebrate my birthday when it really occurred, in fact sometimes I don’t think I was really born until a November night 36 years after I got here but that’s another story for another time.

And that brings me to the Red Sox! And here’s how. Fenway Park is an iconic temple of, not only Boston but New England. And the Red Sox are truly a team of New England and there were four states worth of New Englanders who attached their names to the Declaration of Independence sent to King George.

They were, from Massachusetts: John Adams, Samuel Adams, John Hancock, Robert Treat Paine and Elbridge Gerry. From New Hampshire came Josiah Bartlett, William Whipple and Matthew Thornton while Rhode Islanders Stephen Hopkins and William Ellery stated their intentions by signing their names. The Connecticut quartet of  Samuel Huntington, Roger Sherman, William Williams and Oliver Wolcott rounded out the New England autographs on one of the worlds most famous documents.

Now as I chronicled these names I got to thinking how are these guys connected to the Red Sox and Fenway Park. Here’s what I found out.

The Red Sox had two namesakes of the Adams cousins who signed the Declaration, who wore their uniform.

A couple of namesakes of this man played for the Sox as well.

Josh Hancock pitched three games for the Sox in 2002.

None of the New Hampshire or Rhode Island signees have any connection to the Red Sox. However a pair of the Connecticut signees do.

Now the New Englander who signed the Declaration with the closest connection to the Red Sox is this gentleman and when you see his name you understand why?

There are no less than 10 guys named Williams who have worn a Red Sox uniform and that begins all the way back in 1902 when they were not even called the Red Sox.

Dave Williams pitched three games for the Boston Americans in 1902.

Rip Williams caught and played 95 games at first base for the 1911 Red Sox, the year before they moved into Fenway Park.

Edwin Dibrell “Dib” Williams also closed out his career, of six years, in Boston. In 1935 he played first, second, third and shortstop in 75 games in a Red Sox uniform.

Dick Williams playing career ended with the Red Sox in 1963 and ’64’. His impact in Boston came when he piloted the Red Sox to the American League pennant in 1967. Williams was elected into the National Baseball Hall of Fame in 2008.

Stan Williams became the fourth Williams to close his career in Boston when he pitched 4 1/3 innings in three games in 1972.

Dana Williams’ career consisted of five at bats in three games in 1989. He doubled for his only major league hit.

Randy Williams was the last Williams to play for the Red Sox. He pitched 8 1/3 inning in seven games last season. Today the southpaw is pitching in Japan.

Last and certainly not least, in fact, last and most definitely most is none other than Theodore Samuel Williams. 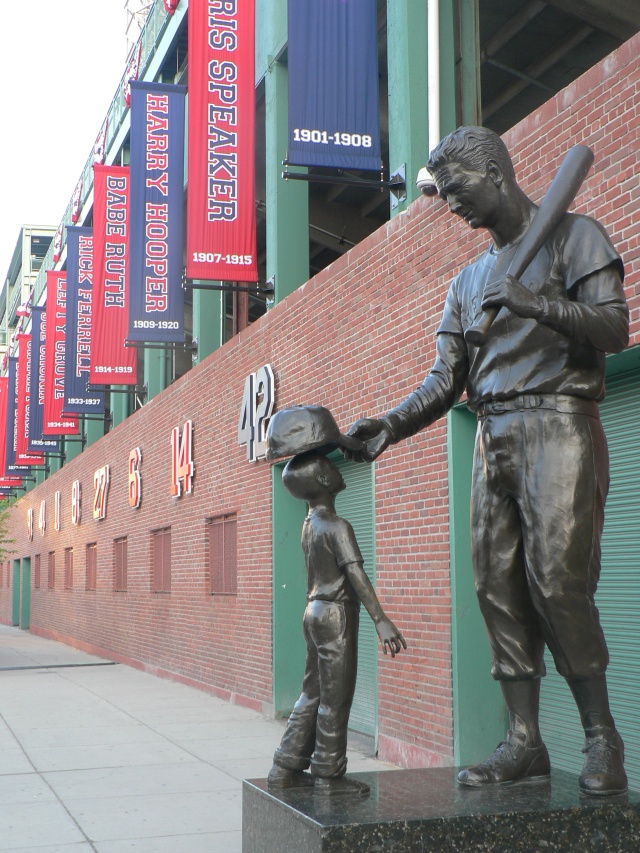 And long may his story be told!

Hello and welcome, my name is Raymond Sinibaldi. An educator for more than two decades, a baseball fan for nearly 60 years, I have authored four books about baseball and her glorious history; with a fifth on the way in late spring of 2015; the first, The Babe in Red Stockings which was co-authored with Kerry Keene and David Hickey. It is a chronicle of Babe's days with the Red Sox. We also penned a screenplay about Babe's Red Sox days so if any of you are Hollywood inclined or would like to represent us in forwarding that effort feel free to contact me through my email. In 2012 we three amigos published Images of Fenway Park in honor of the 100th birthday of Fenway Park. That led to the creation of this blog. The following year, 2013 came my first solo venture, Spring Training in Bradenton and Sarasota. This is a pictorial history of spring training in those two Florida cities. The spring of 2014 brought forth the 1967 Red Sox, The Impossible Dream Season. The title speaks for itself and it also is a pictorial history. Many of the photos in this book were never published before. The spring of 2015 will bring 1975 Red Sox, American League Champions. Another pictorial effort, this will be about the Red Sox championship season of 1975 and the World Series that restored baseball in America. I was fortunate enough to consult with sculptor Franc Talarico on the “Jimmy Fund” statue of Ted Williams which stands outside both Fenway Park and Jet Blue Park Fenway South, in Fort Myers Florida. That story is contained in the near 300 posts which are contained herein. This blog has been dormant for awhile but 2015 will bring it back to life so jump on board, pass the word and feel free to contact me about anything you read or ideas you may have for a topic. Thanks for stopping by, poke around and enjoy. Autographed copies of all my books are available here, simply click on Raymond Sinibaldi and email me.
View all posts by fenwaypark100 →
This entry was posted in Fenway Park Baseball, Fenway Park Other and tagged Bob Adams, Bob Wolcutt, Dana Williams, Dave Williams, Denny Williams, Dib Williams, Dick Williams, Fenway Park, Gary Hancock, Josh Hancock, Ken Williams, Randy Williams, Red Sox, Rip Williams, Ted Williams Statue, Terry Adams. Bookmark the permalink.