I hope and trust that all had a great Thanksgiving! Nothing like Turkey Day! Mine was almost perfect, only one thing missing!

My girls with my nieces, nephews and significant others. And of course the Crown Jewels, two of my granddaughters.

I want to thank one and all for your kind responses regarding my return. I had to leave the blog for a bit as I was facing  a deadline for my book on spring training in Sarasota and Bradenton Florida. It will be released March 4th. I must confess that the abysmal Red Sox season made it a bit easier to leave it! Good God what a painful summer. I am back and will be posting a couple of times a week here as we look towards “next year”.

On Saturday (November 24) Kerry, David and I were at the Barnes and Noble bookstore at the Derby Shops in Hingham Massachusetts and we had a wonderful response! Thanks to all who stopped by and said hello and I must confess that the allure of Fenway Park and the resilience of New England’s Red Sox fans always amaze me. A special thanks to all of the folks who purchased Fenway as a holiday gift. As bad as the Red Sox were this year, Fenway will always be Fenway. There are few better places in the world to pass the time. 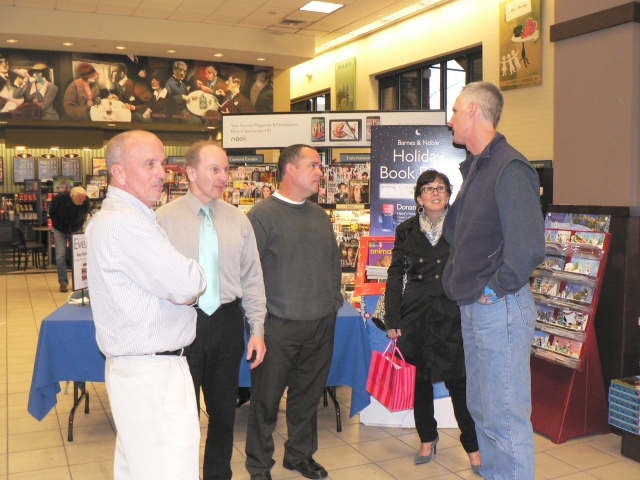 My good friend Pete and his lovely wife Donna stopped by to say hello.

Pete and I reach a long way back in Red Sox history as he was an invaluable aid to me when I was plying my wares on the streets outside Fenway back in the early 80s. We hocked many a TShirt together in the closing years of Yaz’s career. More on that in a future blog.

We are hoping to appear a few more times before Christmas for signings and I will keep you posted as to the whens and wheres. In the interim, if you would like to purchase an autographed copy, click here I will be happy to send it along.

Those of you who have followed this blog, may remember that I am involved with the Venice High School baseball team in Venice Florida.

Well on Saturday night the Gulf Coast city of Venice Florida held their annual Christmas Parade. The 2012 Venice High School State Champion baseball team was honored as they were asked to be the grand marshals.

Well a couple of weeks ago, the Venice High School girls volleyball team won the program’s third State Championship. Head baseball coach Craig Faulkner got together with head volleyball coach Brian Wheatley and the result was that both these teams of champions led the 2012 City of Venice Christmas Parade.

I am privileged and exceedingly proud to be associated with these two programs who embody excellence both on and off the field and volleyball court.

Hello and welcome, my name is Raymond Sinibaldi. An educator for more than two decades, a baseball fan for nearly 60 years, I have authored four books about baseball and her glorious history; with a fifth on the way in late spring of 2015; the first, The Babe in Red Stockings which was co-authored with Kerry Keene and David Hickey. It is a chronicle of Babe's days with the Red Sox. We also penned a screenplay about Babe's Red Sox days so if any of you are Hollywood inclined or would like to represent us in forwarding that effort feel free to contact me through my email. In 2012 we three amigos published Images of Fenway Park in honor of the 100th birthday of Fenway Park. That led to the creation of this blog. The following year, 2013 came my first solo venture, Spring Training in Bradenton and Sarasota. This is a pictorial history of spring training in those two Florida cities. The spring of 2014 brought forth the 1967 Red Sox, The Impossible Dream Season. The title speaks for itself and it also is a pictorial history. Many of the photos in this book were never published before. The spring of 2015 will bring 1975 Red Sox, American League Champions. Another pictorial effort, this will be about the Red Sox championship season of 1975 and the World Series that restored baseball in America. I was fortunate enough to consult with sculptor Franc Talarico on the “Jimmy Fund” statue of Ted Williams which stands outside both Fenway Park and Jet Blue Park Fenway South, in Fort Myers Florida. That story is contained in the near 300 posts which are contained herein. This blog has been dormant for awhile but 2015 will bring it back to life so jump on board, pass the word and feel free to contact me about anything you read or ideas you may have for a topic. Thanks for stopping by, poke around and enjoy. Autographed copies of all my books are available here, simply click on Raymond Sinibaldi and email me.
View all posts by fenwaypark100 →
This entry was posted in Fenway Park Baseball, Fenway Park Other and tagged Barnes and Noble Hingham Massachusetts, David Hickey, Fenway Park, Images of Fenway Park, Kerry Keene, Venice Christmas Parade, Venice High School Baseball, Venice High School Volleyball. Bookmark the permalink.