Of Blizzards, Sunshine and Baseball…..

This weekend, I played two rounds of golf in weather that touched 80 degrees while my family and friends in my beloved Boston Massachusetts battled a winter blizzard of monumental proportions.

While my loved ones battled the elements, my worries were minimal, should I play it where it lay?

And rearranged the configuration of shoreline roads.

In took me back 35 years, nearly to the day, when the area was struck by the “Blizzard of 78”.

There were 3500 cars stranded, then abandoned on Route 128 from Dedham to Braintree Massachusetts.

In February of 1978, mere days after the famous blizzard, the Red Sox reported to their spring training camp in Winter Haven Florida.

They were coming off a marvelous year in which they had won 97 games, only to finish tied for second place with the Orioles, two and a half games behind the Yankees.

Before they would embark for Boston and the opening of the season, they acquired this man. 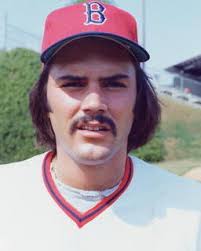 On March 30th, just days away from breaking camp, the Red Sox sent Ted Cox, Mike Paxton, Bo Diaz and Rick Wise to the Indians for Eck and catcher Fred Kendall; and the final piece was in place for what was to become and epic season.

The Blizzard of 78 was a prelude to a baseball season of monster proportions. With no less than four future Hall of Famers in their lineup, the Red Sox carried the fight to the last day of the season and in fact, one game beyond. Dropping a heart breaking 5-4 winner take all playoff game to the Yankees on October first of that same year, their 99 wins on the season, was simply not enough.

That 1978 Red Sox team remains, to this observer, the best team I ever saw that did not win.

As my friends and loved ones dig out from under this historic storm, may they take comfort in knowing that in a matter of days, the sound of leather meeting leather, and leather meeting wood will be heard among the confines of this lovely little yard in Fort Myers Florida.

And that can mean, only one thing, baseball season has arrived, and spring is right around the corner.

And as for me,

Hello and welcome, my name is Raymond Sinibaldi. An educator for more than two decades, a baseball fan for nearly 60 years, I have authored four books about baseball and her glorious history; with a fifth on the way in late spring of 2015; the first, The Babe in Red Stockings which was co-authored with Kerry Keene and David Hickey. It is a chronicle of Babe's days with the Red Sox. We also penned a screenplay about Babe's Red Sox days so if any of you are Hollywood inclined or would like to represent us in forwarding that effort feel free to contact me through my email. In 2012 we three amigos published Images of Fenway Park in honor of the 100th birthday of Fenway Park. That led to the creation of this blog. The following year, 2013 came my first solo venture, Spring Training in Bradenton and Sarasota. This is a pictorial history of spring training in those two Florida cities. The spring of 2014 brought forth the 1967 Red Sox, The Impossible Dream Season. The title speaks for itself and it also is a pictorial history. Many of the photos in this book were never published before. The spring of 2015 will bring 1975 Red Sox, American League Champions. Another pictorial effort, this will be about the Red Sox championship season of 1975 and the World Series that restored baseball in America. I was fortunate enough to consult with sculptor Franc Talarico on the “Jimmy Fund” statue of Ted Williams which stands outside both Fenway Park and Jet Blue Park Fenway South, in Fort Myers Florida. That story is contained in the near 300 posts which are contained herein. This blog has been dormant for awhile but 2015 will bring it back to life so jump on board, pass the word and feel free to contact me about anything you read or ideas you may have for a topic. Thanks for stopping by, poke around and enjoy. Autographed copies of all my books are available here, simply click on Raymond Sinibaldi and email me.
View all posts by fenwaypark100 →
This entry was posted in Fenway Park Baseball, Fenway Park Other and tagged 1978 Playoff Game, Blizzard of 78, Dennis Eckersley, Dwight Evans, Fredd Lynn, Jim Rice, Nemo, Red Sox 1978. Bookmark the permalink.