“The finest prospect I have ever seen.” Notre Dame Head Coach Frank Leahy on Harry Agganis

The Terriors of Boston University played their home games at Fenway Park for four seasons, (1949-1952). They found the confines of Fenway Park very friendly as in those four seasons they compiled a record of 14-7-1 in games played there. The newly formed team was in only their fifth season when they moved into Fenway and the success of the team coincided with, not only the move to Fenway, but the arrival of one Aristotle George (Harry) Agganis.

As a sophomore in 1949, Agganis set a school record throwing 15 touchdown passes, intercepted 15 passes, led the nation with a 46.5 punting average and was named the second team All American quarterback behind Kentucky’s Babe Parilli (see Thanksgiving post). On November 1, 1949, over 40,000 fans jammed Fenway Park to witness Agganis lead the Terriors against the University of Maryland. The game was broadcast nationally on CBS radio with a young voice by the name of Vince Scully making his national broadcast debut. Maryland squeaked out a 14-13 win and Scully went on to broadcasting immortality. He remains the voice of the Los Angeles Dodgers, a position he has held since 1950.

The Cleveland Browns made Agganis the 12th overall pick in the 1952 NFL draft, hoping he would replace Otto Graham. He opted for baseball however becoming the Red Sox regular first baseman in 1954. The Terriors floundered following the departure of Harry Agganis and though the football program showed flashes of brilliance on occasion they never returned to the glory days of Fenway Park and Harry, “The Golden Greek” Agganis and disbanded following the 1997 season. 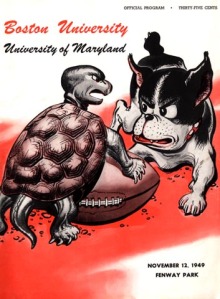 A relic from the golden days of Boston University football.

“The Golden Greek” carries at Fenway. 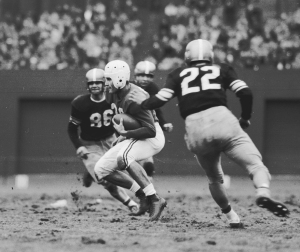 Hello and welcome, my name is Raymond Sinibaldi. An educator for more than two decades, a baseball fan for nearly 60 years, I have authored four books about baseball and her glorious history; with a fifth on the way in late spring of 2015; the first, The Babe in Red Stockings which was co-authored with Kerry Keene and David Hickey. It is a chronicle of Babe's days with the Red Sox. We also penned a screenplay about Babe's Red Sox days so if any of you are Hollywood inclined or would like to represent us in forwarding that effort feel free to contact me through my email. In 2012 we three amigos published Images of Fenway Park in honor of the 100th birthday of Fenway Park. That led to the creation of this blog. The following year, 2013 came my first solo venture, Spring Training in Bradenton and Sarasota. This is a pictorial history of spring training in those two Florida cities. The spring of 2014 brought forth the 1967 Red Sox, The Impossible Dream Season. The title speaks for itself and it also is a pictorial history. Many of the photos in this book were never published before. The spring of 2015 will bring 1975 Red Sox, American League Champions. Another pictorial effort, this will be about the Red Sox championship season of 1975 and the World Series that restored baseball in America. I was fortunate enough to consult with sculptor Franc Talarico on the “Jimmy Fund” statue of Ted Williams which stands outside both Fenway Park and Jet Blue Park Fenway South, in Fort Myers Florida. That story is contained in the near 300 posts which are contained herein. This blog has been dormant for awhile but 2015 will bring it back to life so jump on board, pass the word and feel free to contact me about anything you read or ideas you may have for a topic. Thanks for stopping by, poke around and enjoy. Autographed copies of all my books are available here, simply click on Raymond Sinibaldi and email me.
View all posts by fenwaypark100 →
This entry was posted in Fenway Park and Football and tagged All American, Boston University, Fenway Park, Football, Harry aaganis, Red Sox, The Golden Greek. Bookmark the permalink.

3 Responses to “The finest prospect I have ever seen.” Notre Dame Head Coach Frank Leahy on Harry Agganis