The All Fenway Team Secondbasemen, The Quiet Leader and The Laser Show…..

The second base position is being voted on for the All Fenway Park team. http://mlb.mlb.com/bos/fan_forum/all_fenway_team.jsp

I only chose one first sacker and I will only choose one third baseman as well, however for the middle infielders I will choose two at each spot.

There are 13 spots yet to fill and two will be filled at second base. The first guy is both known and loved by all and why not. He packs a 6’3″ 245 pound effort into a 5’9″ 180 lb pound body. He has no business being as good as he is and as good as he is has been good enough to garner the Rookie of the Year Award in 2007 and an MVP Award in 2008. He is tough, he is ornery, he is fearless, he is relentless, he is brilliant, he is a self-proclaimed laser show, he is Dustin Pedroia! 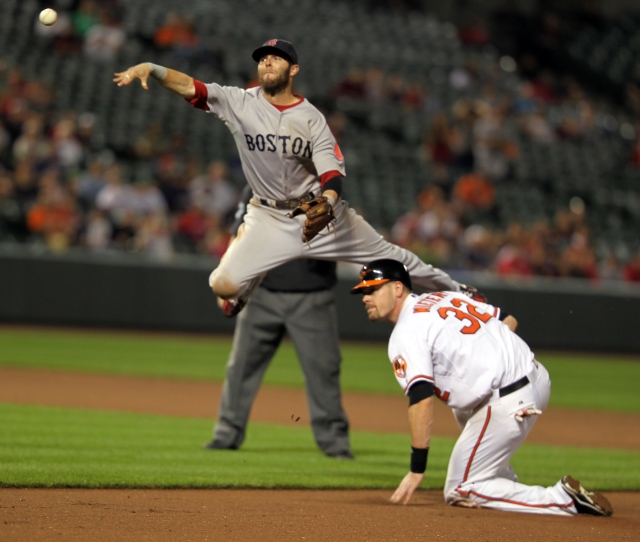 Pedroia was voted the 2007 Rookie of the Year with 24 of 28 first place votes. (Photo Keith Allison)

A second round draft pick in 2004, he made it to Fenway for a brief stint in September of 2006 before sticking for good in 2007 and being voted the league’s top rookie. He followed that up by leading the league in runs scored, hits and doubles the following year and adding his first gold glove to his collection. He also won the Silver Slugger Award as the best offensive player at his position on his way to the 2008 MVP. 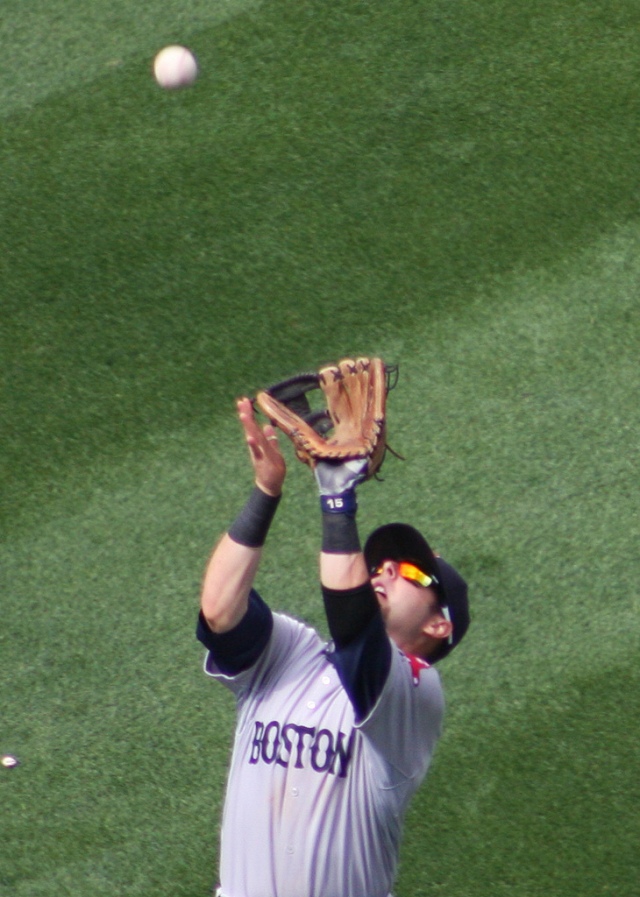 In his six seasons calling Fenway Park home, he has averaged 17 home runs and 78 RBI per season while hitting .305. In two American League Championship Series’ he has hit .345 with four homers and 10 RBI and in the 2007 World Series he hit .278 with a homer and four ribbies! 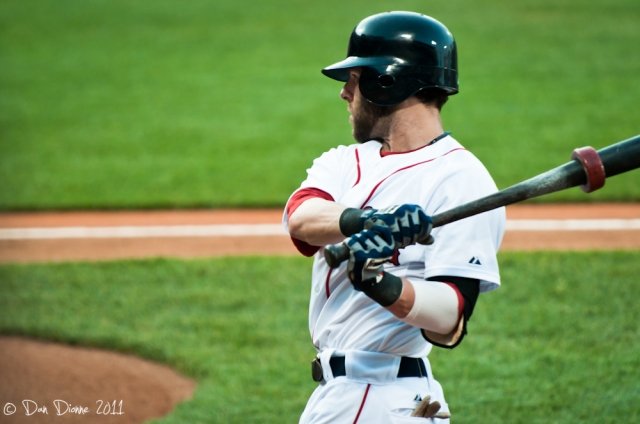 A favorite of the Fenway Faithful, his value on the diamond may well be exceeded by his value in the clubhouse.

The other second baseman made his debut in 1937 at the age of 19 and on the twenty-fifth birthday of Fenway Park. He played 14 seasons with the Red Sox and he was an all-star nine times. He is Robert Pershing Doerr! 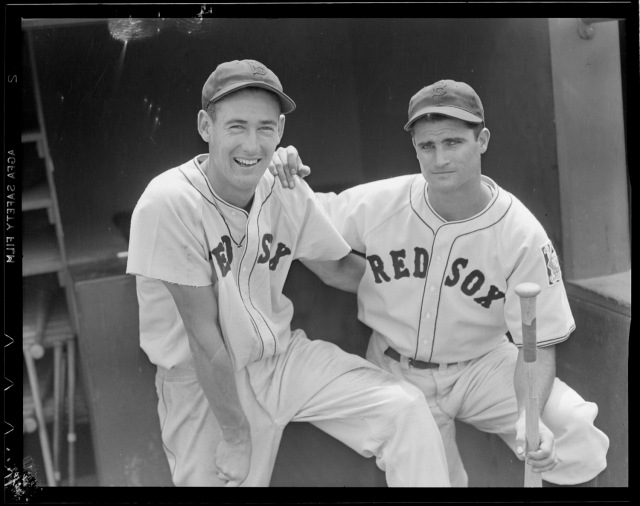 Doerr is honored in bronze, along with Ted Williams, Dom DiMaggio and Johnny Pesky, outside of Fenway Park in the Teammates Statue.

Purchased from the Hollywood team in the Pacific Coast League in 1935, Doerr, like Pedroia, made it to Fenway in just two years. Bobby was a significant cog in the Red Sox return to respectability in the late 1930s and throughout the 1940s. 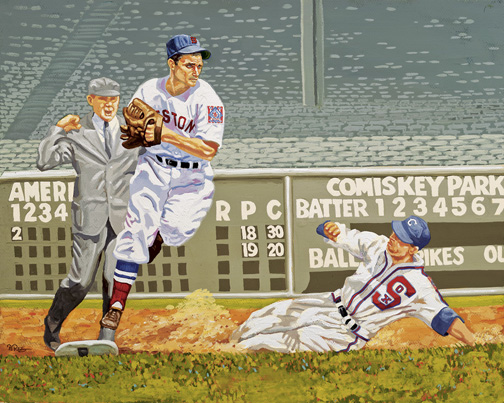 Playing before the days of the Gold Glove Award, he was widely recognized as one of the best defensive second basemen of his time; four times he led the league in putouts and fielding percentage. (Dick Perez Art Work)

A very versatile hitter, Doerr could be a table setter as well as a run producer. In his 14 seasons he hit .288 and averaged 19 home runs, 108 RBI and 95 runs scored per season! And also, like Pedroia, he excelled in the post season, hitting .409 with a homer and three RBI in his only World Series appearance in 1946.

He is the only Red Sox player in history to hit for the cycle twice and in 1986 he was recognized as one of the games all-time greats when the Veteran’s Committee voted to induct him into the National Baseball Hall of Fame. The Red Sox followed in kind, when they retired his number 1 on Fenway Park’s hallowed right field facade. 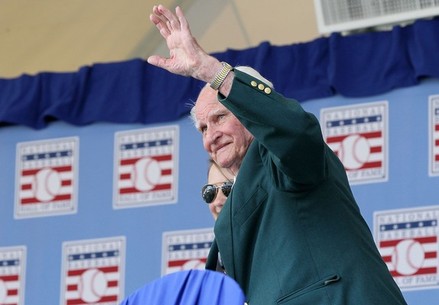 Bobby Doerr’s career was cut short at the age of 33 due to a back injury.

Called the “silent captain” of the Red Sox by none other than Ted Williams, Doerr served as the Red Sox first base coach in 1967 and today he is revered as one of the greatest Red Sox of them all!

A favorite of the Fenway Faithful, his value on the diamond may well have been exceeded by his value in the clubhouse.

And so it is on this day in Fenway Park history, March 26, 2012, All Fenway secondbasemen selection day.

Hello and welcome, my name is Raymond Sinibaldi. An educator for more than two decades, a baseball fan for nearly 60 years, I have authored four books about baseball and her glorious history; with a fifth on the way in late spring of 2015; the first, The Babe in Red Stockings which was co-authored with Kerry Keene and David Hickey. It is a chronicle of Babe's days with the Red Sox. We also penned a screenplay about Babe's Red Sox days so if any of you are Hollywood inclined or would like to represent us in forwarding that effort feel free to contact me through my email. In 2012 we three amigos published Images of Fenway Park in honor of the 100th birthday of Fenway Park. That led to the creation of this blog. The following year, 2013 came my first solo venture, Spring Training in Bradenton and Sarasota. This is a pictorial history of spring training in those two Florida cities. The spring of 2014 brought forth the 1967 Red Sox, The Impossible Dream Season. The title speaks for itself and it also is a pictorial history. Many of the photos in this book were never published before. The spring of 2015 will bring 1975 Red Sox, American League Champions. Another pictorial effort, this will be about the Red Sox championship season of 1975 and the World Series that restored baseball in America. I was fortunate enough to consult with sculptor Franc Talarico on the “Jimmy Fund” statue of Ted Williams which stands outside both Fenway Park and Jet Blue Park Fenway South, in Fort Myers Florida. That story is contained in the near 300 posts which are contained herein. This blog has been dormant for awhile but 2015 will bring it back to life so jump on board, pass the word and feel free to contact me about anything you read or ideas you may have for a topic. Thanks for stopping by, poke around and enjoy. Autographed copies of all my books are available here, simply click on Raymond Sinibaldi and email me.
View all posts by fenwaypark100 →
This entry was posted in Fenway Park Baseball and tagged "Lefty" Grove, All Fenway Team, Babe Ruth, Bobby Doerr, Carlton Fisk, Dick Radatz, Dustin Pedroia, Fenway Park, Jason Varitek, Jimmie Foxx, Jon Lester, Jonathan Papelbon, Luis Tiant, Mel Parnell, Pedro Martinez, Red Sox, Roger Clemens, smokey joe wood. Bookmark the permalink.