The phone will ring today in the homes of a few men and their lives will be transformed in an instant. Their fates are already sealed as the ballots are in and all that awaits is the announcement from that little hamlet in Cooperstown New York as to whom will be joining the most elite group of honored athletes in America!

The National Baseball Hall of Fame in Cooperstown New York.

The Hall of Fame.

There are 34 men on the ballot vying for entry into these most hallowed of halls, 17 of them who appear on the ballot for the first time. And of those 17, three are expected to be in Cooperstown on July 26th as baseball’s highest honor is bestowed upon them.

Of those remaining 14, Gary Sheffield, I believe will receive the most votes but not near the 75% required for election. I think Rich Aurilia, Tony Clark, Darin Erstad, Brian Giles, Tom Gordon, Eddie Guardado and Jason Schmidt will appear for the only time as I do not see them garnering the 5% of the vote required to stay on the ballot.

I believe Craig Biggio will make it this time after falling just two votes short last year! Imagine that! Two votes! Biggio tied Pie Traynor in 1947 and Nellie Fox in 1985 with the closest near miss. Traynor was elected the following year but Fox had to wait until 1997 when the Veterans Committee put him in.

I look for Mike Piazza (about 65% of the vote) and Jeff Bagwell (about 55% of the vote) to fall short again this year as the voters are still not quite sure about them; while I believe Sammy Sosa will fall of the ballot forever.

If I am correct, and these four get the call, it will be the first time since 1955 that the Baseball Writers association of America (BBWAA) will elect more than three candidates. They elected four in ’55’ and 1947. The record is five and that was the inaugural class of 1936.

It may come as a surprise to you that there has NEVER been a player elected unanimously to the Hall of Fame! That’s right, not Babe Ruth, not Hank Aaron, not Willie Mays, not Walter Johnson, not Ty Cobb, not Ted Williams, not Joe DiMaggio, not Mickey Mantle, Not anyone! EVER!

And if I were to ask you to name the player who received the highest percentage of votes for induction you might mention one of the above guys.

There have been 28 men of the 306 inducted who have received 90% or more of the vote with four of them from the five inaugural inductees. As inconceivable as it may seem, only 83.6% of the BBWAA in 1936 thought Walter Johnson and his 417 wins worthy of the Hall of Fame. But that’s another story for another day.

There have been exactly five men who have received 98% of the vote. FIVE!

And here they are:

Next up in fourth place, Tyrus Raymond Cobb. That’s right, he of the .364 lifetime batting average, highest in the history of the game.

Next up with the third highest total is Baltimore’s favorite, favorite son, Cal Ripken.

Second place belongs to Lynn Nolan Ryan; the man who hurled seven no-hitters and struck out over 5000 opponents, both accomplishments to likely never be repeated.

And now, could we have a drum roll please! 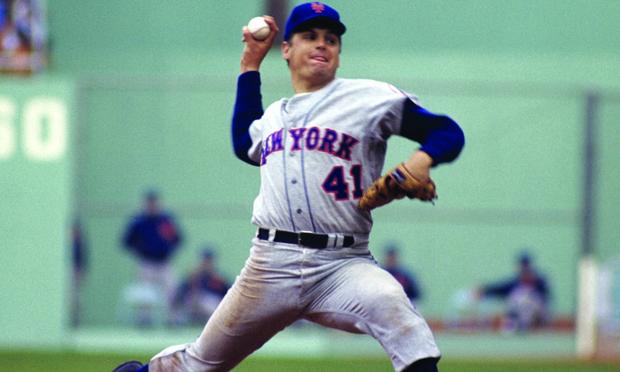 Nolan Ryan and Tom Seaver began their journey together as a part of the 1969 Miracle Mets, the Amazins. Today the two sit atop a list of all time greats deemed by the BBWAA the most worthy and in that capacity they will welcome new members into their fraternity. You can be sure that none of them will receive 100% of the vote but look for the names of Johnson and Martinez to give Ryan and Seaver a run.

Hello and welcome, my name is Raymond Sinibaldi. An educator for more than two decades, a baseball fan for nearly 60 years, I have authored four books about baseball and her glorious history; with a fifth on the way in late spring of 2015; the first, The Babe in Red Stockings which was co-authored with Kerry Keene and David Hickey. It is a chronicle of Babe's days with the Red Sox. We also penned a screenplay about Babe's Red Sox days so if any of you are Hollywood inclined or would like to represent us in forwarding that effort feel free to contact me through my email. In 2012 we three amigos published Images of Fenway Park in honor of the 100th birthday of Fenway Park. That led to the creation of this blog. The following year, 2013 came my first solo venture, Spring Training in Bradenton and Sarasota. This is a pictorial history of spring training in those two Florida cities. The spring of 2014 brought forth the 1967 Red Sox, The Impossible Dream Season. The title speaks for itself and it also is a pictorial history. Many of the photos in this book were never published before. The spring of 2015 will bring 1975 Red Sox, American League Champions. Another pictorial effort, this will be about the Red Sox championship season of 1975 and the World Series that restored baseball in America. I was fortunate enough to consult with sculptor Franc Talarico on the “Jimmy Fund” statue of Ted Williams which stands outside both Fenway Park and Jet Blue Park Fenway South, in Fort Myers Florida. That story is contained in the near 300 posts which are contained herein. This blog has been dormant for awhile but 2015 will bring it back to life so jump on board, pass the word and feel free to contact me about anything you read or ideas you may have for a topic. Thanks for stopping by, poke around and enjoy. Autographed copies of all my books are available here, simply click on Raymond Sinibaldi and email me.
View all posts by fenwaypark100 →
This entry was posted in Fenway Park Baseball and tagged Babe Ruth, Cal Ripken, Cooperstown, Craig Biggio, George Brett, Hall of Fame Vote, Honus Wagner, Jeff Bagwell, John Smoltz, Mike Piazza, National Baseball Hall of Fame, Nolan Ryan, Pedro Martinez, Randy Johnson, Tom Seaver, TyCobb, Walter Johnson. Christy Mathewson. Bookmark the permalink.